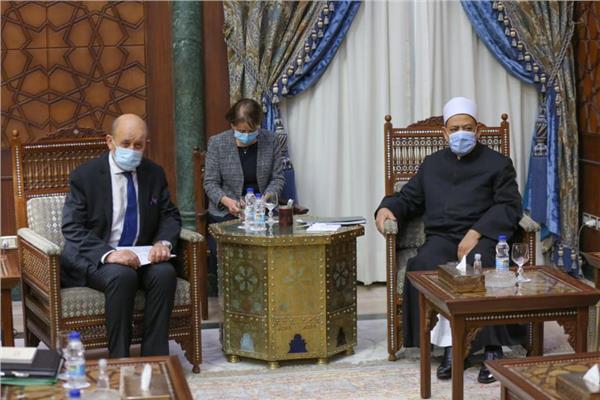 The Sheikh of al-Azhar, Ahmed al-Tayeb, threatened to prosecute those who insult the Prophet Muhammad in international courts.

Al-Tayeb said during his meeting with French Foreign Minister Jean-Yves Le Drian, who is visiting Cairo, that he rejects in form and content the insult to the Prophet Muhammad under the guise of freedom of expression.

“We will track down those who insult our noble prophet in international courts, even if we spend our entire life doing just that,” he added. He continued: “We reject describing terrorism as Islamic, and we do not have the time or luxury to enter into terms that we have no interest in, and everyone should stop this term immediately, because it hurts the feelings of Muslims in the world, and contradicts the truth that everyone knows.”

For his part, Le Drian said that his country has a deep respect for Islam, adding that Muslims in France are part of its history and identity. We are fighting terrorism and the modification of religion and extremism. He added that his country believes in the importance of the voice of al-Azhar and the Grand Imam in calling for tolerance and moderation, warning of hatred and the delusions of extremists, according to Egyptian media.

The positions and words of the Sheikh of al-Azhar, Ahmed al-Tayeb, are often widely supported in Egypt during the recent period, where many feel that he is expressing what they want to declare in many cases. After al-Tayeb met with the French foreign minister at the headquarters of the al-Azhar Sheikhdom in Cairo, the Sheikh of al-Azhar’s hashtag was trending on social media, under which people expressed their happiness at al-Tayeb’s statements in the meeting.

Activists considered the Sheikh of al-Azhar’s statements to fully express the Arab and Islamic street’s pulse, as Muslims worldwide described them as ideal. Many social media platforms showed their support for the speech of the Sheikh of al-Azhar before the French foreign minister by circulating and sharing it on their platforms and personal pages. During the last period, al-Tayeb entered into multiple clashes with the regime of Abdel Fattah al-Sisi on several issues, the most important of which were issues related to the attack on Islamic heritage and the demand for a renewal of religious discourse.

Al-Sisi had tried to cancel the verbal divorce, which was explicitly rejected by the Sheikh of al-Azhar, in addition to his clash with the president of Cairo University who attacked Islamic heritage. Each time, Ahmed al-Tayeb enjoys popular support in front of al-Sisi’s authorities, the state institutions and state-sponsored media attacks him; the last time was during Dar al-Ifta’s law crisis, when the new bill was rejected by the Sheikh of al-Azhar.

The visit of French Foreign Minister Jean-Yves Le Drian to the Egyptian capital, Cairo, to ease relations with the Arab world, came after the crisis of the cartoons of the Prophet Muhammad, peace be upon him. During his visit, the French Foreign Minister met his Egyptian counterpart Sameh Shoukry, President Abdel Fattah al-Sisi, and the sheikh of al-Azhar, who strongly criticised France for the cartoons. Because of the cartoons insulting to the Prophet of Islam, popular campaigns were launched to boycott French goods and products in Egypt and many Muslim countries, which greatly upset France.

Al-Tayeb refused to describe terrorism as Islamic and added that we have neither the time nor the luxury to enter into terms that we have no interest in, and everyone should stop this term immediately. The Sheikh of al-Azhar affirmed that he rejects, in form and substance, insulting the Prophet Muhammad under the guise of freedom of expression and that his speech will not be diplomatic, as the matter is related to insulting the Prophet of Islam.

The Sheikh of al-Azhar, Ahmed al-Tayeb, condemned a few days ago the systematic campaign to involve Islam in political battles and create chaos that began with a malicious attack on the Prophet Muhammad, peace be upon him. For his part, Le Drian said, during his meeting with al-Tayeb, that his country has deep respect for Islam, adding that Muslims in France are part of the country’s history and identity. He added that his country believes in the importance of the voice of al-Azhar and the Grand Imam in calling for tolerance and moderation, warning of hatred and the delusions of extremists, according to Egyptian media.

On social media platforms, activists expressed their admiration for the Sheikh of al-Azhar’s position and his powerful speech to the French minister, stressing the campaign’s continuation to boycott French products. Tweeters believed that the French foreign minister’s arrival to Cairo and the French president’s media dialogue to justify his position are evidence of the success of the economic boycott weapon. In contrast to the praise and support for the speech of the Sheikh of al-Azhar during the meeting, the speech of Egyptian Foreign Minister Sameh Shoukry was mocked and attacked by observers. In response to a question from one of the French agencies about the existence of political detainees in Egypt, Shoukry said during a press conference with his French counterpart that there is no arbitrary detention in his country.

The Egyptian foreign minister claimed that imprisonment in Egypt is in accordance with the law and the public prosecution’s decision, and protection is provided to the accused, stressing that Egypt is a state of law. Shoukry’s statements sparked a wave of ridicule over these allegations, as activists published earlier estimates by human rights organisations indicating that there are more than 60,000 political prisoners in Egypt. Others questioned the emergency law, indefinite pretrial detention, the expansion of referring civilians to military trials, and the establishment of exceptional courts.