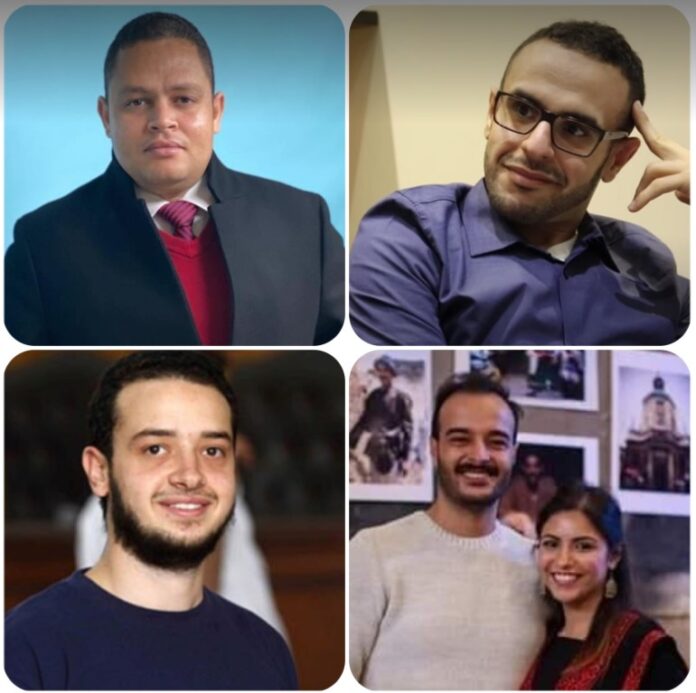 University teacher Ahmed Abdel-Basit, who lives in New Jersey, was celebrating with his daughter Aisha, who lives in Egypt, for her sixth birthday on the internet; he told her that he wished that they would spend her next birthday together, a repeated wish year after year. Aisha has never celebrated her birthday with her father, who has been living in the United States as a refugee since he arrived there years ago, and has been waiting in the hope of being reunited with his family. Ahmed cannot return to his country, as a death sentence was passed against him in absentia over an incident which occurred while he was abroad. Ahmed Basset is currently living in safety in New Jersey, and his situation is stable after winning a case and obtaining the right to permanent residence in the United States. Still, he does not hide his nostalgia for his family, which he has not seen for more than five years.

Ahmed, who teaches physics at a community college in New Jersey, publishes all the news of his family, celebrates his children’s successes on Facebook, and prepares for the completion of the procedures for the reunification of his family which has been torn apart. His situation is not unique in Egypt, as there are hundreds of families that have been torn apart by years of exile or detention and are now yearning for their reunification.

“Without hope,” an Egyptian journalist describes to Egypt Watch his situation with his family, as he lives in Turkey without obtaining a nationality or permanent residence that would allow him to be reunited with his family. The Egyptian journalist, who requested anonymity, said that he works underground and does not want the Egyptian regime to know that he is working for an opposition news site so that his family is not targeted. He confirms that he talks to his family, whom he left six years ago, every night, but he knows that reunification is a long way off.

The Egyptian journalist revealed that he submitted a request to obtain political asylum in Canada through the United Nations, but these are long procedures with no end. The Egyptian journalist mentioned that he left Egypt in a hurry when someone close to the Egyptian regime told him that he would be arrested soon. Indeed, days after he left the country, Egyptian security forces raided his home and asked about him to arrest him. He said with sorrow: “When I left the country, I thought it was a few days or months, and I will return soon, but two months ago, I now extinguished the candle of my sixth year.”

Despite the tragedy of families torn apart by alienation, it is considered less of a tragedy than the crisis of families suffering arrest. Asmaa (not her real name) narrates her tragedy with her husband to Egypt Watch, saying: “My husband’s arrest has now covered his second year, and although he has obtained a court order to release him, he has been disappeared again.”

Asmaa’s husband was a journalist for the Freedom and Justice newspaper affiliated with the Muslim Brotherhood, and this newspaper was suspended days after the military coup in 2013. While Asmaa’s husband was travelling to perform Umrah, he was arrested at Cairo Airport, and forcibly disappeared for about two months, then appeared in the Supreme State Security Prosecution. Her husband was charged with several accusations, including spreading false news and belonging to the Muslim Brotherhood.

During the last six months, Asmaa has not succeeded in visiting her husband due to the Egyptian authorities’ measures in prisons. Two months ago, an Egyptian court issued a decision to release him, but after he arrived at his police station, the security authorities disappeared him again. Asmaa refuses to publish her name or that of her husband, for fear of provoking the Egyptian authorities, in order not to include him in a new case, in what has become known locally as the detainees’ revolving doors.

Asmaa’s husband did not see one of his daughters, and while the younger one began to speak, she calls her grandfather “Baba” because she had never seen her father. Asmaa wishes that her husband would be released so he could live with her and his two daughters, even if in one room they would not leave; she does not want her daughters to live their lives deprived of the father while he is alive.

Egyptian rights activists say that there are some cases in which the spouses were arrested and the children left without any care. One of these cases is Egyptian journalist Solafa Magdy and her husband, the photographer Hossam el-Sayyad. More than a year ago, the Egyptian authorities arrested Solafa and her husband, leaving their son without a father or mother.

A security force in civilian clothes arrested Hussam al-Sayyad and his wife Solafa Magdy, along with the activist Mohamed Salah, while they were heading to the car after leaving a cafe in Dokki. The Supreme State Security Prosecution charged them with participating in a terrorist group and spreading false news. The situation took a more dramatic turn in March 2018, when the Egyptian authorities arrested Abdullah Mudar, his wife Fatima Moussa, and their baby daughter, Alia. The entire family was disappeared for eight days before the mother and daughter appeared later in the Supreme State Security Prosecution.

The case of Anas al-Beltagy and his father Mohamed al-Beltagy constitutes another case of detaining different generations of the same family. Anas has not been released from prison since 2013, when he was 19-years-old. He is now 26-years-old. Anas spent seven years on accusations against which there is no evidence, so he was released, imprisoned, and released, but the authorities refused his return to life.

Although Anas was acquitted of two cases that were fabricated against him, namely the case of the assault on a staff member at Scorpion Prison during his father’s visit, the events of which took place several days before his arrest, and the second is the case known in the media as the Marriott Cell case. Still, in October 2015, he was sentenced to five years in prison in a third case in which he was accused of possessing a weapon, without providing any evidence for that. For seven years, Anas’ family has been deprived of him. The only reason for this is that he is the son of Muhammad al-Beltagy, a leader in the Muslim Brotherhood.

Mohamed el-Beltagy is considered one of the most prominent Egyptian dissidents, and as a result, he was arrested on August 29, 2013, and dozens of charges were brought against him, and he was sentenced to three death sentences and more than 170 years in prison. Al-Beltagy (the father) has been subjected, since the date of his arrest, to various types of physical and psychological torture, among which is the collective abuse of his family, especially after his insistence on accusing the leaders of the Egyptian regime of killing his daughter Asmaa in the massacre of Rabaa al-Adawiya in August 2013.

Some Egyptian politicians and human rights defenders hope during the current period that many detainees will be released due to political issues, amid news of an anticipated presidential pardon. But others say that the news was circulated many times, and yet politicians have not been released on a large scale.