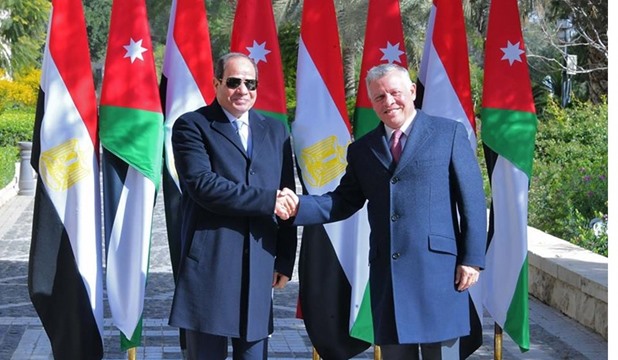 Last Monday, Abdel Fattah al-Sisi visited Jordan for a meeting with Abdullah II of Jordan, just a day after the meeting that gathered Abbas Kamel, the head of the Egyptian General Intelligence, and his Jordanian counterpart Ahmed Hosni with the President of the Palestinian Authority Mahmoud Abbas, in Ramallah. The meeting between al-Sisi and Abdullah II was focused on the peace endeavors between Palestine and Israel in connection with the foreign ministers of Egypt, Jordan, Germany and France meeting in Cairo last week, on ways for promoting the peace process in Palestine.

Since normalisation with Israel months ago, the Emirates has attempted to present itself as the pioneer force for promoting full Arab normalisation. This step threatens Egypt’s historical role as the main mediator in the peace process regarding the Arab-Israel conflict. Egypt’s declining influence worries Egypt these days because it lowers the strategic importance of Egypt for the new USA administration of Joe Biden. Earlier, Biden warned al-Sisi, “No more blank cheques will be given to Trump’s favourite dictator,” referring to al-Sisi. Egypt is attempting to find a common ground with the new USA through playing such role, so the Egyptian foreign ministry and the Egyptian presidency are working on this issue. Although there are conflicting opinions between Egyptian officials about the possibility of cooperation between Egypt, Saudi Arabia and the Emirates regarding the peace process, the solo performance of the UAE reflects an Emirati ambition that could threaten Egypt’s status. Cairo’s message arrived in Abu Dhabi and worried it.

The UAE criticised the quartet meeting of foreign ministers in Cairo for promoting peace, and described it as “traditional, relevant to the targets of the four states not to the ambitions of the Palestinian people, who became convinced that the political settlement now has new rules.” The newspaper added that these movements could be an attempt by the four states to stop other trajectories that do not converge with the interests of these states, referring to UAE-Israel normalisation.

The Egyptian endeavor reflects the regression in Egypt’s influence and status after years of inaction towards the Palestinian cause and siding with Israel. This pushed the Palestinians to search for another sponsor, the role that is hoped for by a lot of countries. The regression of Egypt’s influence shed a shadow on its critical situation in the crisis of the Grand Ethiopian Renaissance Dam, as Egypt appeared fully paralysed and devoid of real allies in confronting Ethiopia. After years of failed negotiations, Egypt stands powerless towards the most dangerous threat it has faced for decades.