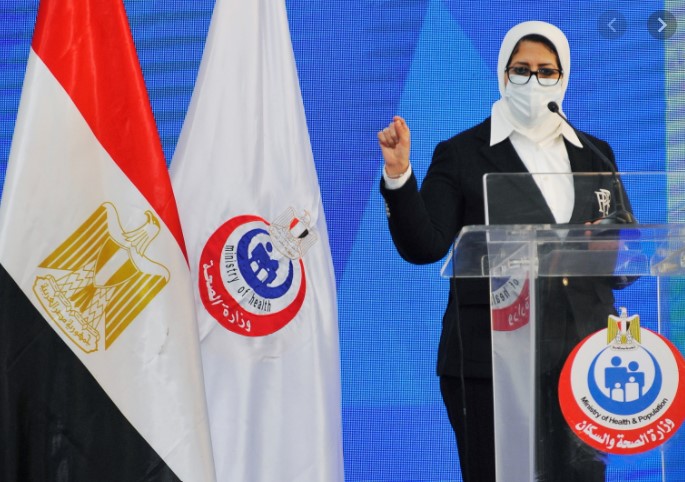 Getting the corona vaccine for free in Egypt has become the people’s new battle against the regime, which has been accustomed to withdrawing the money it can from Egyptians’ pockets over the years of its rule. A state of surprise and widespread criticism prevailed among citizens and doctors after millions of Egyptians’ hopes of obtaining free vaccines for the virus were dashed, similar to the rest of the world, which rushed to provide vaccines to their citizens free of charge.

On the evening of the day that the Egyptian Minister of Health Hala Zayed launched a campaign to vaccinate medical personnel against the coronavirus, she revealed that the vaccine would not be free. In a televised interview, the minister explained that the vaccine would be distributed among citizens for a fee, and the price of one dose is EGP 100 (about $6.3), and EGP 200 for the second dose. The minister excluded medical staff, and those who receive benefits from the government.

The minister’s statements are consistent with the presidential statement issued early last month, which made it clear that the Long Live Egypt Fund will support the provision of coronavirus vaccines to eligible groups, especially medical personnel, critical and chronic cases, and the elderly only. In contrast to this, the same minister previously announced upon the arrival of the vaccine’s first shipment in televised statements that the vaccine would be free of charge. According to the minister’s statements, the Egyptian government has contracted with several companies to secure 100 million doses of coronavirus vaccines, which will be sufficient for 50 million citizens (almost half of the population). The minister indicated three types of vaccines including 40 million doses of the Chinese Sinopharm vaccine, 40 million doses of the Global Alliance for Serum and Vaccine Production (GAVI), and 20 million doses of AstraZeneca.

Regarding the cost of vaccines required to vaccinate citizens, Egyptian Finance Minister Mohamed Maait revealed earlier that his government had allocated between $1.5 billion and $1.6 billion to buy and give vaccines to 70-100 per cent of the population. A few days ago, the Long Live Egypt Fund launched a campaign to collect financial donations to provide the coronavirus vaccine to those who are unable to, under the slogan “We share for humanity,” to collect about EGP 2 billion (about $127 million), for those enrolled in the Social Solidarity and Dignity programmes.

Faced with this, Egyptian lawyer and human rights defender Khaled Ali filed a lawsuit before the Administrative Court, against both the president, the prime minister, and the health minister, to demand that coronavirus vaccines be free for “all Egyptians.” Ali’s lawsuit stated that it might be acceptable to say that there is a prioritisation of the groups that will receive the vaccination, such as medical staff, the elderly, mothers, and those who provide vital and strategic services to the public, according to the state’s ability to import vaccines until they are successful in manufacturing them in Egyptian factories. He added, “As for obtaining vaccinations for a fee, it is against the explicit law, regardless of the value of this consideration.”

The legal team evaluating the case stated that it could not be claimed that Egyptian citizens’ free access to vaccination represents a burden on the public budget or the state treasury. The lawsuit enumerated the reasons for this, indicating that the citizen is the locomotive of development, protecting his life, taking care of his health, and ensuring his right to life are the most important priorities of the state, and it cannot be valued. He added that the elimination of this epidemic through vaccination for all leads to the recovery of the economy as well, and therefore all the money that goes towards the vaccination will help in the growth and development of the economy in a manner that far exceeds all that will be spent on these vaccinations.

He pointed out that this epidemic has left brutal pain and suffering for thousands of Egyptians. The social, economic, and human consequences that all have ensued will cast a shadow over all these families for decades. He stressed that protecting millions of Egyptians from this painful experience is a constitutional right for them, and the state must enable them to do so. He added that the state is building projects that cost billions of dollars from the wealth of the people, so what is the value of all these projects if we do not guarantee citizens the right to life and the right to a vaccination that will protect them from this epidemic, whatever the cost of this vaccination.

Quite a few medical teams are afraid of getting the Chinese Sinopharm vaccine, as a spokesperson for the Ministry of Health revealed, on the eve of the vaccination campaign, that only 78 doctors out of 200 working at Abu Khalifa Isolation Hospital, had agreed to receive the vaccine. Two members of the Medical Council revealed that many syndicate members refused to obtain this vaccine for several reasons, among them, waiting for other types of vaccines and being satisfied with the approved protocol drugs as an alternative to the Chinese vaccine currently available.

A former member of the General Syndicate of Physicians, Ahmed Shousha, said that these concerns are legitimate due to lack of confidence in the Chinese vaccine and its clinical results and pending the stronger vaccines from countries such as Britain and America. He criticised the former decision of the Legal Committee to provide the vaccine to citizens for a fee, saying, “The vaccine should be free for everyone because setting a price for it means that millions of Egyptians will refrain from buying the vaccine, and there is a small percentage that does not recognise corona and does not care about it, which means that the threat of corona will remain. “

The Coordinator of the Committee for Defending the Right to Health (civil society), Muhammad Hassan Khalil, also criticised the Ministry of Health’s decision not to provide free vaccines to all citizens. He said: “The government must support the citizen’s right to obtain a safe vaccine against the coronavirus because it is an immunisation for society and the state together.” He confirmed that the entire society is now in danger, and in order to protect the people from the virus, from 70 per cent to 80 per cent of the citizens must be vaccinated with the available vaccines. He expressed his fear that many would not be able to obtain the vaccine due to the absence of awareness-raising campaigns on the need to take the vaccine and that the government should urge and force them to take the vaccine, especially since the poverty rate in Egypt reaches about 30 per cent of the population.

The number of beneficiaries of the Takaful and Dignity programmes, which amount to about three and a half million people, does not reflect the real numbers of poor people in Egypt. According to the last census of the poor in Egypt, poverty rates reached 29.7 per cent of the population of more than 101 million people. In one go, Egypt fell 23 places to 47th in January on the Bloomberg Agency index, which measures the ability of different countries to adapt during the corona pandemic, the second biggest decline in the world after Ireland. The index is based on several measures, including infection and death rates, the percentage of the population covered by vaccine supply agreements, the strength of its health care system, and GDP growth expectations.

The solo man state: how the general consolidated power