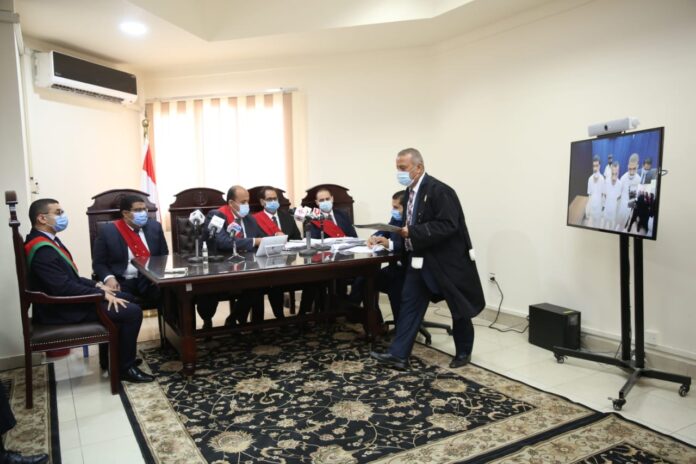 Abdel Fattah al-Sisi has directed that online renewal of remand be used more regularly, a mechanism that adds a flaw to the politically-directed trials of detainees in Egypt.

On 18 October 2020, the Ministry of Justice inaugurated a project for online renewal of remand considering it a step in using digital technology to improve litigation and trial procedures. The mechanism uses online video connections between the courts and places of detention to avoid transferring defendants between them.

The government said that the project has security and economic advantages as it saves costs and avoids the danger of transferring detainees, along with avoiding the spread of COVID-19. The government added that the ministry tried the mechanism over the past months in courts in New Cairo, South Cairo, North Cairo, Heliopolis and Abdeen, and in al-Qanater and al-Khairia Prison, Cairo Public Prison, al-Nahda, 15 May, East Alexandria, West Alexandria, Bourg al-Arab, al-Arbaniat, al-Hadra, Damnhour and Karmouz.

A couple of human rights lawyers condemned the new mechanism considering it “a detraction of the guarantees of fair trials, which include direct communication between the defendant and the judge. In addition, this mechanism instills the exceptional trial procedures, which started with holding trials in police headquarters instead of courts.” They also pointed out that the mechanism was not discussed or approved by the parliament, which represents the legislative authority that is responsible for amending the criminal procedures law. What happened then represents a violation from the executive authority represented by the ministry of justice over the legislative authority.

Lawyer Khaled al-Masry affirmed that a direct meeting between the defendant and the judge is necessary for the former to tell the latter about any assaults he might have been subjected to, without fearing punishment from his prisoners, the same issue lawyer Mohamed Abdel Aziz expressed his concern over.

Lawyer Ahmed Abdel Latif, from the Arab Network for Human Rights Information, said that the efficacy of online litigation has to be limited to pretrial procedures, but does not include criminal trials that affect the rights and freedoms of individuals. Abed Latif added that “online renewal” will double the number of defendants that are interrogated in the absence of their lawyers considering that the most prominent obstacle faced currently by lawyers is that they are not notified of the dates their clients will be interrogated before the Supreme State Security Prosecution.

Abdel Latif gave an example of what happened on 6 October 2020, when he and a couple of lawyers were in the Police Academy where the state security court is held and were surprised to find 52 state security cases that included 600 defendants yet none of their lawyers were notified. The prominent lawyer Khaled Ali supported the objections presented by Masry and Abdel Latif, confirming that the criminal procedures law does not permit such mechanism, which requires amendments that have to include standards and guarantees of the publicity of the trial and the rights of the defendant.