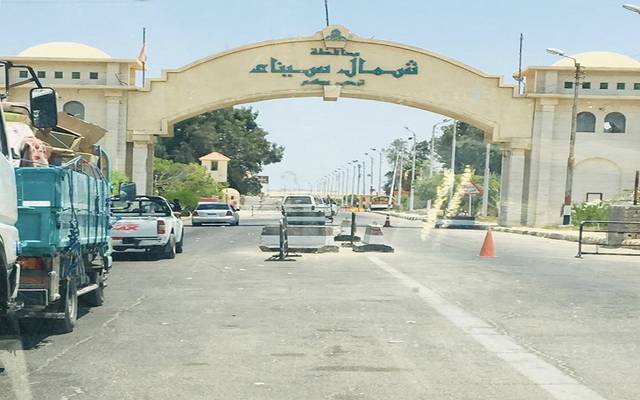 “Take compensation, and you can work outside the governorate.” With these words, officials in Sinai faced the people of Al-Arish, the largest city in the governorate, while they were talking about a presidential development plan that would demolish hundreds of homes.

Residents of the city of Al-Arish revealed that a meeting was held on February 24. Governor Muhammad Shousha, government representatives, and members of the Senate and House of Representatives spoke about North Sinai development, the axes plan, and the street expansion. This scheme raised the ire of the people, who objected to the demolition of their homes. Hossam Ahmed, one of the residents who attended the meeting, attacked the governor, saying: “We do not want compensation, as long as you want to evict us, give us an immigration visa outside Egypt.”

This meeting, with a few of those affected, was the first direct confrontation between the residents and the governor, which was described by those attending the meeting as “an attempt to impose a fait accompli with a loud voice and with the power of the state without considering any alternative solutions,” which increased the anger of the residents. One day after the meeting, and during his weekly interview with North Sinai Radio, the governor indicated more than once that the President of the Republic himself had the idea to develop the city and establish the hubs, and that he also suggested the number of lanes for each road after the development.

According to what the governor announced, the Engineering Authority for the Armed Forces will implement the initial development plan, at a cost of EGP 500 million, including the establishment of three main axes parallel to the sea.

During the radio interview, the governor discussed the compensation awarded to the owners of the damaged houses, explaining that they were divided into owners and tenants. The owner will have the choice between obtaining financial compensation or allocating an apartment by direct order in the social housing buildings in the Al-Sabeel or Al-Obour areas. As for the tenant, a rental apartment will be allocated to him by direct order in one of the two areas. The two areas are far from the city’s residential block, the first located in the far west of Al-Arish, and the second in the far southeast.

The governor did not mention on the radio what he said in his meeting with the families, who informed them that the owner of a residential building would be single-handedly included in the category of owners, choosing between compensation or allocating an apartment. On the other hand, the owner’s married sons residing in apartments within the same building would be treated as tenants, according to those who attended the meeting.

Realising that the governorate is going ahead with the implementation of development plans without hearing their views, residents began to work on the ground. They try to make their voices heard by announcing that meetings would be held for the affected people and all residents of the city in an attempt to find proposals and solutions.

Indeed, four meetings were held, attended by notables from the city, representatives, and members of parliament, who tried to justify their negative stance in the governorate meeting, that they were not aware of its content, and that they had received an invitation to meet the governor, without details of the content of the meeting.

One of the outcomes of the meetings was using the Engineers Syndicate in North Sinai to make alternative plans for the same development processes that avoid the demolition of homes and residential buildings. Apart from meetings and proposals, Arish residents began to object to the development plans more clearly, by preventing surveyors from carrying out surveying works. The residents wrote “No to removal” on their homes.

The three axes, on which work began, are completely different from developing the port of Al-Arish, the far east of the city, which will eliminate most of its eastern neighbourhoods, which heralds a complete change in the shape of Al-Arish and its residential masses. Amidst the talk about the development plans and the residents’ anger about them, there was less talk about the war that has raged for eight years in all areas of North Sinai.

The past months of this year witnessed a marked decline in the Sinai Province (Wilayat Sinai) organisation’s activity in the eastern regions of North Sinai (Al-Arish, Sheikh Zuweid, and Rafah). The retreat of ISIS operations in the eastern part of the governorate has not prevented casualties.

However, in contrast to its retreat in the east, Wilayat Sinai began to restore some of its activity in western and central North Sinai (Bir Al-Abd and Al-Hasanah), according to frequent accounts from residents. They said that ISIS fighters began to reappear in the villages west of Al-Arish and east of Bir Al-Abd. They considered this appearance an attempt by the militants to regroup their ranks again after the strikes they received from the armed forces which forced them to withdraw from several villages around Bir Al-Abed, where they had a foothold.

The withdrawal of UAE funds changes the media map in Egypt‏

After the European Parliament decision, could human rights improve in Egypt?

A final sentence of 15 years imprisonment for Egyptian activist Ahmed...