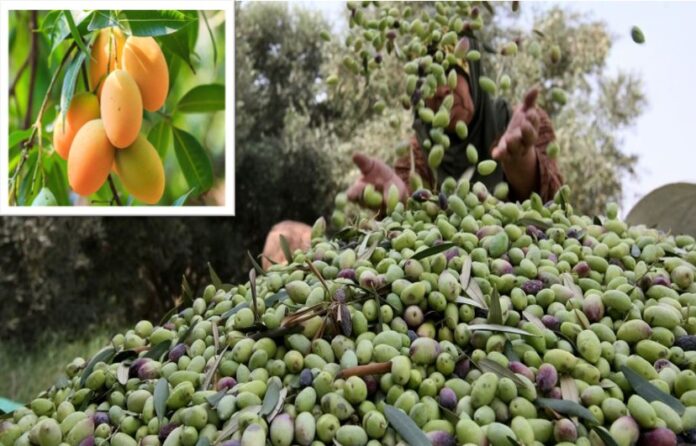 Olive farms in Egypt have been severely damaged this year, as their productivity decreased by more than 50 per cent. They have been affected by climatic changes and high temperatures during the flowering season of the crop in March, which of course will be reflected in the price of olives and its derivatives that will rise, and Egypt’s rank in the list of global olive producers.

This is not the first crisis to hit farmers in Egypt this year, but was preceded by many crises, including the mango crop crisis, the potato crop crisis, and the fertiliser supply crisis, until this year became the “year of farmers’ crises” par excellence.

Farm owners complained about the drop in production for less than half, as one farmer said that the average production per acre fell to 100 kilos instead of two tonnes, and another said that the production of his farm, which has an area of ​​two acres, does not compensate for one per cent of the cost of agriculture, despite the high prices of olives this year due to a severe shortage of production.

The head of the Farmers’ Syndicate, Hussein Abu Saddam, confirmed that he has monitored losses of up to 50 per cent in a number of olive farms throughout the Republic, expecting that this will lead to a rise in the price of olives and their derivatives, which appeared in the last period, as the price of a kilo of olives (farm delivery) ranges between seven and 12 pounds, depending on the type, while the price this year ranges between 18 to 25 pounds. Despite this, these increases are not enough to cover the farmers’ losses. The government is failing to issue the executive regulations for the law establishing the Agricultural Solidarity Fund, which aims to compensate farmers and cover damages resulting from natural disasters and pests, even though the law was passed seven years ago.

No mango in Ismailia farms this year

Ismailia Governorate is famous for mangos, as here there are about 37 per cent of the cultivated areas of mango in Egypt. In July of each year, the governorate’s farms turn into a beehive of young men and women who gather various varieties of the mango crop, which the Egyptians love. But this year, due to climate changes and weather fluctuations that occurred during March and April, the joys of mangoes turned into consolations after their farmers suffered heavy losses.

Egypt grows about 300,000 feddans of mango, which in normal years produced about 2.8 million tonnes, but this year production decreased by 85 per cent, according to government estimates, which of course was reflected in the prices of these fruits, which doubled amid the lack of supply. While the average production per acre ranges between six and eight tonnes of mango, the production of its farms this year has decreased to only about one or two tonnes per acre. A farm owner complained that his farm last year produced about 35 tonnes, while this year its production did not exceed four tonnes.

According to agricultural consultants, part of the effects of the crisis could have been mitigated if the farmers had prepared before it, considering the failure of the Ministry of Agriculture to play its role in agricultural extension and raising farmers’ awareness. As with the olive growers, the mango farmers did not receive any compensation or government assistance to reduce their losses, due to the failure to issue the executive regulations for the law establishing the Agricultural Solidarity Fund, which regulates the matter.

The crisis of high prices of agricultural fertilisers was renewed during the winter season, which began in early October, with the increase in fertiliser prices on the black market due to the lack of availability of agricultural associations, which are concerned with providing them to farmers at cost prices. This, of course, led to the farmers’ suffering in obtaining fertiliser, as they had no choice but to buy it from the free market at double the price, as the prices of urea fertilisers in the free market rose this year to 9,000 pounds per tonne compared to 4,600 pounds last year, and the tonne of nitrates reached 7,000 pounds instead of 4,500 pounds, while the tonne of potassium rose to 13,000 pounds instead of 9,000 pounds. This is a puzzle, as this crisis is recurring periodically despite the presence of a surplus in fertiliser production in Egypt, amounting to 11.5 million tonnes.

A large part of the crisis is due to the factories’ failure to supply the agreed share to the government, and the government’s failure to seriously hold these factories to account as there is an old agreement between the government and fertiliser factories, according to which factories supply 55 per cent of their production at cost to agricultural associations, in exchange for obtaining subsidised gas used in manufacturing, and facilities in licences for the establishment of these companies. The law stipulates a penalty for not supplying the quotas of agricultural associations at 50 pounds per tonne, but the rise in fertiliser prices globally encourages factories to export abroad at high prices, and pay the fine to the government, because it reaps more profits.

Despite the recurrence of the crisis on an annual basis, the government is failing to amend the law to make the fine larger so that factories that do not supply the agreed quantities are reprimanded, or until it comes to banning exports temporarily until the needs of the agricultural associations are supplied.

The government enters the market of charities

The Delta variant has been in Egypt for a month and...