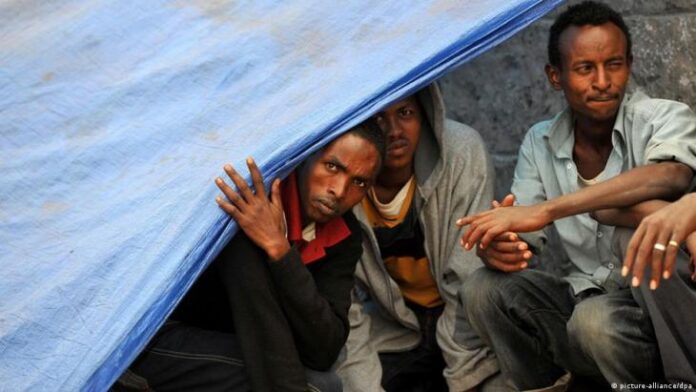 In mid-March, the Egyptian authorities deported 31 Eritrean asylum-seekers from Egypt to Asmara, in flagrant violation of international law that criminalizes the forcible return of refugees to their countries of origin, especially if these countries are known to violate human rights. In addition, the regime of President Abdel Fattah al-Sisi is preparing to deport about 50 other Eritreans, including an infant and three children under the age of seven, to their country, without even having access to the asylum procedure or the possibility of challenging their expulsion orders.

The forced deportation took place on March 16 and 17, as 31 asylum-seekers, including 5 women, 6 newborns, 7 girls and adolescents, were deported to Asmara, where the Eritrean security services received them and transferred them to an unknown location, according to the Refugees Platform in Egypt. Independent aims to serve refugees and asylum seekers in Egypt. Deported Eritreans, including children, were arbitrarily detained without charge or trial and in cruel and inhuman conditions, where they were denied access to adequate medical care, personal hygiene items, including sanitary napkins, clothes and adequate food. The Egyptian regime has also refused to allow them access to UNHCR, impeding their right to access the asylum procedure.

Among those forcibly removed was a woman who was mute, unable to speak or hear, who was deported with her husband and two children. The woman was pregnant at the time of her detention at the Daraw Police Department in Aswan Governorate, and when her due date came, she was transferred to a hospital in Aswan, in very poor health condition. After the birth, the security forces told her that her newborn had health problems and would remain in the care for newborns (nursery) and that she should be returned to the detention facility again without being able to see her baby, and two days later they told her that her baby had died and was buried.

The deported Eritreans face the risk of enforced disappearance, torture and lengthy imprisonment, while they may be punished by death and life imprisonment, if they leave the country irregularly in time of war, as Eritrea fought a war with Ethiopia between 1998 and 2018. UN human rights experts said that forcibly returned to Eritrea are considered “traitors” and are often “detained upon arrival in Eritrea, interrogated, tortured, kept in severe punitive conditions, and subjected to disappearance”.

It is not the first time

This is not the first time that the Sisi regime has forcibly deported Eritrean refugees or asylum seekers. In the last three months of the last year 2021, 39 people were deported to Asmara, which was condemned by UN experts, including the special rapporteurs on Eritrea and torture. In a statement issued in November 2021 after the Sisi regime deported Eritrean refugees, the UN experts confirmed that Egypt is violating the principle of the prohibition of forcible return of refugees and international human rights obligations, criticizing Cairo’s lack of appreciation for the human rights violations that these deportees may be exposed to upon their return.

The experts stressed that “any repatriation without full respect for procedural safeguards, including individual risk assessment, violates the absolute prohibition of refoulement under international human rights, humanitarian and refugee law.” It seems that the Egyptian regime is determined to continue perpetrating this crime, as Amnesty International pointed out the regime is preparing to deport about 50 other Eritrean refugees over the next few weeks, calling for an immediate halt to these procedures.

The forcible returns of Eritrean asylum seekers in Egypt can be seen as a “gift” to the repressive Asmara regime, in the hope that the latter will support it in its struggle with Ethiopia over the Renaissance Dam that is expected to negatively affect Egypt’s share of the Nile waters. It is also possible, according to experts, that the Egyptian government intends by all means to deter immigration waves from Eritrea because it knows that immigration from Eritrea represents a situation likely to escalate, especially in light of the repercussions of the civil war in Ethiopia on the Tigray region there, which included large numbers of refugees from Eritrea.

These violations, and many others, confirm that the narrative that the Sisi regime is trying to market about itself, through its media networks and electronic committees, that it is the protector of refugees and persecuted people from different walks of the earth, is nothing but a great illusion and a scandalous hoax, and that the regime has no problem in running over Law and international conventions to woo repressive regimes like it.