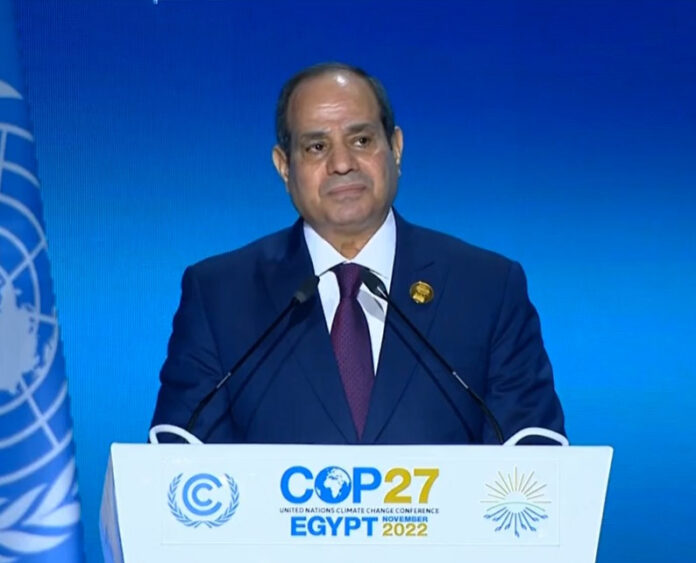 Egypt receives delegations from nearly 200 Sharm El-Sheikh countries to participate in the United Nations Climate Summit (COP27) between 6 and 18 November.

The conference will be held during the escalating global energy crisis, the prospects of an unprecedented recession in the worldwide economy, and the Russian-Ukrainian war, which has multiplied the effects of those crises, leading observers to be pessimistic about countries’ fulfilment of their plans to fight climate change. On the contrary, other observers are optimistic about discussing the case of financing damage and losses after ten years of reluctance by the developed countries and the most harmful to the climate.

These conferences, which will reach their 27th edition this year, began with the Earth Conference in the capital Brazilian Rio de Janeiro, in 1992. Since that year, conferences have been held annually to review the policies needed to save the planet. The most crucial event was Paris Agreement In 2015, when many countries agreed to reduce the use rates of fossil fuels and carbon emissions, which increased global warming and pledged to take the necessary measures to keep the global temperature rising below 1.5 degrees Celsius.

Developed countries also agreed to support developing countries with grants and loans of up to $100 billion annually, starting from 2020, to contribute to reducing carbon emissions and adapting to the effects of climate change. But there were in some conferences, even the Glasgow conference in Scotland last year, many disagreements about some files, most notably that the developed countries have to admit their responsibility for climate change, which obliges them to compensate developing countries for their losses as a result of climate changes. So observers see the inclusion of the damages and losses file in the COP27 agenda as progress in negotiations. Egypt’s foreign minister and chair of the ongoing conference, Sameh Shoukry, said that the discussions of damages and losses on the agenda of COP27 will not guarantee compensation or admission from developed countries in climate change but will aim for a final decision by 2024.

Egypt is betting with ambitious plans to attract green investments and to obtain a large share of grants and loans to reduce carbon emissions and for climate adaptation. It pushes, with other developing countries, towards cancelling a part of their debts and directs it to spend on avoiding the effects of climate change. Last year, Egypt issued a summary of Egypt’s National Climate Change Strategy 2050, presented at the Glasgow Climate Conference, under the agreement concluded at the Paris Conference. According to an environmental activist participating in the (COP27) conference, who refused to give his name, Egypt’s climate strategy “did not present a detailed plan, in which Egypt pledges exact percentages that it intends to reduce, and clarifies procedures adopted to achieve its declared goals. What has been stated is just a summary only, and it also bases its goals on work as usual, not the starting year of 2015, which gives the impression to the observer that the plan reduces the number of emissions. Still, when we calculate it over the starting year, we find an increase in emissions.”

The Egyptian Initiative for Personal Rights also criticized Egypt’s climate strategy in a paper it released last month, as it considers that “without implementing clear performance plans, to localize the environmental dimension and to fight climate change in all sectors of the economy, and with a limited period and regular follow-up, and without transparency in publishing information, we are afraid that the strategy’s objectives will remain only proposals or declarations like previous strategies.” The paper also stated that emissions in the electricity sector would increase by 40% compared to the starting year 2015 in the cement sector, one of the most polluting sectors due to the establishment of new factories and switching to coal in 2015. Although the law provides that alternative fuels (such as garbage and sludge) are a proportion of the fuel mix used, coal still makes up 90%. Switching to coal is expected to cause a 15% increase in carbon emissions by 2030.

The Initiative sees the expansion of roads, bridges and tunnels, which Egypt is preparing as projects that reduce emissions, as an acceptable solution in the short term. Still, in the long run, it will increase the number of cars and traffic congestion again over the years because the roads were designed for private cars and heavy transport, and because of no increasing inappropriate means for mass transportation, and neglecting bicycles and pedestrians.” In addition, the construction of roads contributed to the “removal of huge numbers of trees, green spaces and areas of historical value”, and this is not what was stipulated in the national strategy.

In response to a question by the Arab NGO Network for Development about Egypt’s seriousness in its climate strategy and its commitment to disbursing grants and loans it receives for the defined goals, the researcher Wael Gamal, director of the Economic and Social Justice Unit at the Egyptian Initiative said that the issue of climate change is linked to the political balance in societies, and the social and economic inequalities that the disparities in the distribution of the effects of climate change feed, and thus, it is also about issues of authoritarianism and democracy.”

Gamal added, “Egypt has a poor debt position, so the urgent question is about the new loans that will be granted to Egypt because it can be used to buy weapons or to build iconic towers, instead of spending it on climatic purposes, here it turns out that Human rights issues are not separated from the issue of climate change.” He sees that spending loans other than for its purpose, as “a situation that is not specific to Egypt only, because there is a study issued by the World Bank last year that sparked controversy about the amount of illegal money that exits from countries receiving loans and grants from the Bank, and what donors can do to ensure that this money is not directed otherwise, especially in authoritarian countries with high rates of corruption.” Gamal continued, “But unfortunately, we do not have this ability because loans in Egypt are far from being reviewed by Parliament, or at least they are presented to it without details other than what is stipulated in the Constitution. These loans become burdens that increase the tense debt situation in Egypt.” Gamal finished, “It is not only related to the internal crises of developing countries, but to the positions of various forces internally and externally. Half of the world has wasted its time during the past three decades trying to convince the other half, clinging to extremist right-wing ideological convictions, that there is a climate crisis, including leaders of countries and directors of international institutions. So far, there are accusations about the World Bank’s president’s denial of the climate crisis.”

A press report by Mada Masr revealed that Egypt used a public relations company to manage the communication within the conference. The selected Hill+Knowlton Strategies company, which Egypt has not officially announced as helping to run the conference, has a long history of “leading greenwashing media campaigns for international oil companies, which have the greatest impact on the environment. It is also the same company that promoted the use of coal for producing energy for the first time in Egypt several years ago.”

The investigation indicated that the Egyptian government had hired the American company in 2014, where the company’s CEO in Egypt, Reham El-Adl, led “organized media campaigns to put pressures on public opinion.” El-Adl asked several journalists in various local newspapers to conduct interviews with a group of “experts” they selected to defend the use of coal to solve the energy crisis in Egypt and deny its adverse effects on the health of citizens or the fact that it pollutes the environment. This was faced by human rights organizations and the “Egyptians Against Coal” organization, next to the former Minister of Environment, Laila Iskandar, who resigned from her position two months after the launch of the campaign, but this continued with civil society organizations criticizing the government’s direction, which “came out of the newspaper pages and turned into a long judicial debate that ended only in 2020 after the Administrative Court approved the decision to include coal for power generation in Egypt.”

Despite the opportunities for the Egyptian government to seize many grants, loans and green investments, some people doubt the efficiency and transparency of their exploitation in the right way, which may turn the loans into an additional burden on the state budget, which suffers from an increasing debt crisis, and spends grants and investments in a direction that increases emissions, and ignores decreasing the impact of climate change on marginalized groups.

Profits and arrests: The Egyptian regime is floundering faced with Bitcoin