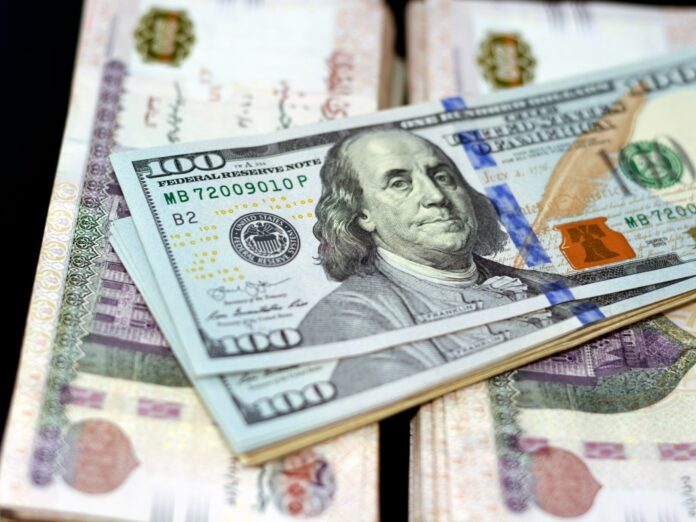 Last Wednesday, the Central Bank of Egypt reduced the price of the pound against the dollar again, for the fourth time in less than one year, bringing the cost of the dollar to 32 pounds for the first time in its history after the last reduction, the price of the dollar reached 27 Egyptian pounds, coinciding with the offering of certificates in Al-Ahly and Egypt Banks, at an interest rate of 25 per cent, which is an unprecedented interest in Egyptian banks.

This reduction is directly related to the press conference held by the International Monetary Fund yesterday evening, Tuesday, which announced the terms agreed upon with the Egyptian government last December to obtain a new loan of $3 billion, according to a 4-year timetable. Each payment amounts to $347 million, starting last December and ending in September 2026. The most prominent conditions were that the Central Bank of Egypt provides a flexible exchange rate for the dollar against the pound, and not intervene to fix the price using its assets and foreign exchange, and its role is limited to intervening to adjust the price in the event of solid disturbances as a result of price fluctuations.

Directly, the government is working to end transactions in the black market by raising the price to reach the value it sets to collect foreign exchange from the black markets and use it to solve problems, on top of which is import. Who is in Charge? The government says that the leading cause of the current economic crisis is related to the effects of the Corona epidemic and the Russian war on Ukraine. Still, the truth is that local government policies are the leading cause of the crisis, as a result of high expenditures on national projects, in addition to the heavy dependence on tourism from Ukraine and Russia as well as wheat, which are problems revealed by the global crisis but did not participate in its industry, and this confirms that these are the reasons approved by the experts of the International Monetary Fund and asked to be amended. All this leads to the question, what next?

First, what is inflation? Inflation is the currency’s depreciation, which means the rise in the price of goods and services provided to citizens in a certain period, measured on an annual basis, compared to the same month in the previous year, and monthly compared to the month preceding it. In the case of Egypt, the rise in Inflation rates is linked to the depreciation of the Egyptian pound, as the Egyptian economy depends more on imports. Digitally, the latest data of the Central Bank of Egypt, issued yesterday, Tuesday, on inflation rates, can be used, in which it was stated that inflation rose in Egypt at the end of the past year and reached its highest level in five years, as core inflation reached 24.4 per cent on an annual basis in December. 2022, up from 21.5 per cent in November of the same year, but for more clarification and a greater understanding of the extent of the inflation rate, as recorded at the beginning of the same year, 8 per cent.

This was reflected in the prices of goods and services. With the dollar’s depreciation several times a row, the price rose due to cost inflation, which is directly related to the cost of producing goods and services, which increased prices, as food and drink prices were high by 38 per cent. The most significant increase was in The bread and grain section increased by 58 per cent, followed by dairy products and eggs by 48.9 per cent, fish and seafood by 44.2 per cent, then vegetables by 38.8 per cent, and meat and poultry prices increased by 35.5 per cent. Although the inflation rate increased by 16.4 per cent compared to the beginning of the year, a recent study by the Central Agency for Public Mobilization and Statistics said that families see that the price of goods increased by 100 per cent or more. According to the same study, in the face of inflation with stable incomes, 75 per cent of families had to reduce food items with high nutritional value, such as meat, poultry, fish and even rice.

Thus, the rise in inflation rates in the new year will be much worse than what happened when the government lowered the price of the pound several times, which will result in more price hikes for goods and services, which will be borne by the poorest families, since the government is primarily required to reduce its expenditures and more liberalization of the price of fuel and natural gas in connection with the global price, which means the stability of household incomes, especially with the government’s continued insistence on relying on indirect taxes that the consumer incurs.

The new reduction and investment

So, what is the solution? The economic axiom to curb inflation and control commodity prices is to increase production, but this is a complex problem. On the one hand, it requires creating an atmosphere for investors in a safe environment. We see the opposite when we find business people imprisoned because of their insistence on not selling their companies, for example, Safwan Thabet and his son. The second issue is supporting competitiveness, which also does not exist, with the overlapping of stakeholders, as the International Monetary Fund experts called them in their press conference. The fund means the army and security services companies that control the market by using their influence, in addition to the importance of investing in economic priorities that increase exports, which does not happen, as the government spends enormous amounts of money on infrastructure projects that do not have returns at the current level. And if among the requirements of the International Monetary Fund is to provide the factors that we have enumerated, then the question arises: is the government committed to implementing these requirements?

The government has already decided to reduce expenditures on national projects, but this will lead us to a new question: will the decision be implemented? Then the question is, will the suspension be continuous or until the crisis passes and returns to it again? The biggest dilemma here is: Will the government be able to implement the exit of the state, as the fund calls it, or the army, as is the case in the economy? All this at a time when inflation already affects investments, as inflation results in a lack of demand, as we showed in the last part of the report. Although inflation will not affect the owners of shares in the Egyptian Stock Exchange, it will affect investors when forced to reduce production. Especially since the local investor is now required to pump huge sums into banks to buy dollars to save on imported goods, and there is a new effect that will inevitably lead to many investors stopping work voluntarily or forcibly. This is in addition to the escalation of foreign investors and the reduction of dependence on the Egyptian currency for investment, which is another disaster. Thus, the government’s appeasement decisions are no longer valid in solving the problem but will exacerbate it even more.