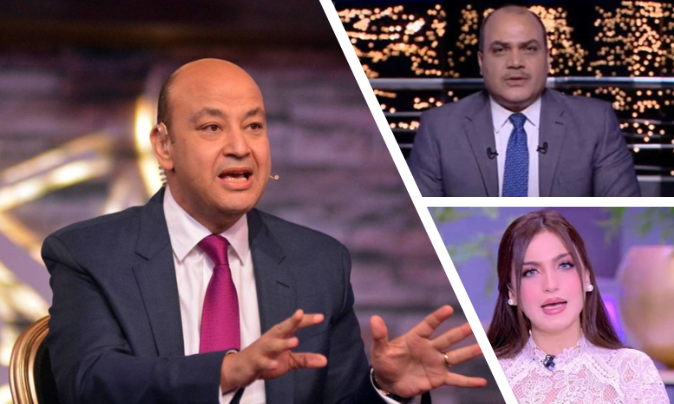 On the screen of MBC Egypt, funded by the Saudi government, on Friday evening, the controversial broadcaster, Yasmine Ezz, was responding to people’s reactions to what she presented. This ended with her being referred for investigation by the head of the journalist’s union, on the same day, regarding what was attributed to her from “Professional and legal violations.” But what does this matter have to do with our topic?

The presenter, Yasmine Ezz, with surprising moves, with words coming from a skilled screenwriter’s script, and with outstanding professionalism in strokes, words, and so on, said: “If you do not want Yasmine Ezz, you have the great Amr Adeeb Al- in the Al-Hekaya program”. She also said: “The great Mr Amr Adeeb’s show contains every need and need, a woman and a man, cooking, art and culture. He knows what is happening around you in an easy language and detail”. Then, at the end of this paragraph, she described what she described as “the big station”, saying that it “provides an enjoyable, hearty and varied show that preserves the family consistency.” Then, she concluded at the end of her speech: “Can you differ with that? You can. We are not obliged to love each other, but we must respect each other.” This is not Yasmine Ezz’s message to her critics on social media, not even the head of the journalist’s union who referred her for investigation. Still, it is a message sent by a Saudi institution working in the Media Production City to the Egyptian government media.

On Thursday, the journalist close to the security services, Muhammad Al-Baz, launched a fierce attack on the journalist, Amr Adeeb, via a video on his personal Facebook page, saying that Adeeb: “who is working for a Saudi agenda” works on a non-Egyptian channel, which is an unusual criticism for who are called the “brothers in their second country,” (referring to Egypt) then came back and confirmed that Adeeb works for Saudi Arabia and to achieve its goals in the region, stressing that he is doing what is asked of him and not for the benefit of the citizen. Al-Baz continued his attack: “Even if there is a huge problem, Amr Adeeb will not be affected by anything, neither he nor his children nor his family, and they will go and sit in Saudi Arabia because he has a Saudi sponsor.” Al-Baz tried to control his speech later and concluded: “Saudi Arabia has the right to do everything in its favour, and while it is doing this, it is recruiting people, in the media, in literature, in art, and recruitment in the sense of working for its benefit and not employment. In short, I see that Amr Adeeb is a Saudi agent serving the Saudi project.”

Muhammad Al-Baz avoided this time his previous mistake when he attacked businessman Naguib Sawiris, in April 2020, against the backdrop of his statements on restarting the economy in the wake of the Corona pandemic with the Saudi Al-Arabiya channel through his program, as he has been overthrown by the Chairman of the Board of Directors of Al-Mehwar channel, Hassan Ratib, at the time, a year before Ratib himself was destroyed as the United Media Services took control of the track and handed its management to the deputy head of the Nation’s Future Party. Baz criticized Sawiris after talking about an economic disaster, and it is clear that talking about an economic deterioration anger security services. This happened to the researcher Ayman Hadhoud, who died under torture after criticizing the economic conditions. At the same time, the official media, which is under the control of the security forces, continues to say phrases such as: “Yes, there is a problem, but it is not a disaster.”

Last Saturday, hours before the new devaluation of the Egyptian pound, Adeeb asked the government to reveal the details of the Central Bank’s recent decisions to raise interest and float the Egyptian pound, saying on the Al-Hekaya program on MBC Egypt: “We have been talking about three things that will happen, first the need to raise the interest rate, the second need to change the exchange rate against foreign currencies, and the third need to sell assets and these are not conditions. These are the reforms that the Central Bank says are necessary. He added: “What will the state do after it used to buy basic commodities at 24, now it will buy at 27, and maybe more when the banks open?” He also added: “The government doesn’t apply austerity measures for itself, and I am supposed as a citizen to suffer alone”. Although Adeeb defended himself using the usual phrase to criticize the government: “I have no agenda, and I am not from the Muslim Brotherhood”, he was attacked and criticized.

Beyond the media battle

Recently, Amr Adeeb used to talk about the economic crisis in Egypt more openly than his colleagues in the Media Production City, as a Saudi channel whose government is loyal to the Egyptian government allows him to do what other journalists do not dare talk about. More clearly, on December 19 2022, he commented on some deputies criticizing the government: “I swear to God, this happens everywhere, and any parliament in the world criticize the government, and questions the government.” But in that intervention, he assures that “The Parliament attacks the government, not the State.” Of course, Amr Adeeb expresses the policies of the channel in which he works and represents the directions of the government that finances it.

In November 2016, the Aramco Petroleum Company informed the Egyptian General Petroleum Corporation that it would stop supplying it with oil derivatives until further notice. This economic decision is related to the Gulf states’ pushing Cairo to start “economic reforms” through well-known international paths to expand borrowing sources. At that time, vast differences arose at the political level between rivalry in the Security Council by voting in favour of projects that the Gulf state did not approve of. The latter considered it contrary to the Arab position, which rarely happens. The Egyptian President commented on the matter: “Egypt will only kneel to God.”

The political tension reached talks about Egypt going to Iran to obtain oil derivatives, to the point where a former Saudi minister and head of the Organization of Islamic Cooperation mocked President Sisi’s statements. This tension in relations between the two countries, which lasted for months, was at the heart of media exchanges and similar tension between the two countries. But this time, what is different is that Riyadh is doing everything in its power to push Cairo to rely on other money sources, which is evident in two activities. Indeed, the money used during the past years has continuously deteriorated. Riyadh pushes Egypt to implement its regional agenda in exchange for this support. For example, it is necessary to pay attention to the rapprochement between Cairo and Doha through Riyadh’s decision itself!

Amr Adeeb talked about the requirements of the International Monetary Fund, which he announced in conjunction with IMF’s program last Saturday evening. Amr Adeeb talks about government austerity and transparency and what the Egyptian government will do to confront the crisis, talking about self-reliance and saying that the Egyptian government is responsible for the economic crisis, which is unusual for the Saudi regime itself. The Egyptian journalist, who the Kingdom funds, only talked about some of the International Monetary Fund’s requirements. The inability of the Egyptian government to go along with Riyadh may make relations strained to the point that Adeeb demands in his program on television the exit of the army from the economy.

The sovereign bond law: Egypt expands its creditor base