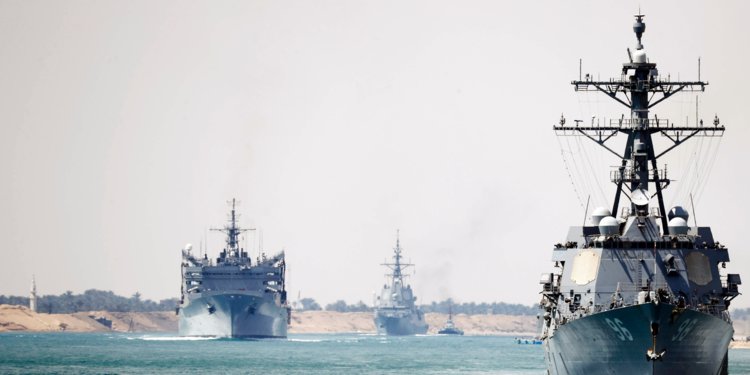 As an aftermath of the latest GCC-American escalation against Iran, Mohammed
bin Zayed, the Crown Prince of Abu Dhabi and the de facto ruler of the UAE, made
a surprise visit to Egypt on May 15, 2019. In the visit, he discussed political
developments in the Gulf region and prospects of confronting its Persian
neighbour.

Egypt issued an official announcement after the visit declaring its full solidarity
with the UAE and Saudi Arabia in their efforts to defend their security and
stability. Furthermore, they asserted the Egyptian long-held commitment towards
the security of the Gulf region, considering it as an integral part of Egyptian
national security. The Egyptian Ministry of Foreign Affairs also condemned, in an
official statement, all actions that may harm UAE’s national security, stressing
Egypt’s full support to the people and the government of the UAE in their efforts
against any challenges they may face.

This was not the first time that Egypt issues official statements regarding such
concerns. Since President Abdel Fattah al-Sisi took office in 2014, he has repeated
the expression “Just on the way” on several occasions, referring to how fast Egypt
would support any of its Arab allies. On November 6, 2018, during the World
Youth Forum, he reiterated that the Egyptian army would protect the Gulf if it
came under threat.

However, these official and public announcements and promises never
materialised. Indeed, discussions between Egypt, Saudi Arabia and UAE regarding
the Iranian matter witnessed contradictory viewpoints as Egypt was unwilling to
assume a more practical position in supporting the GCC countries or to take
punitive actions against Iran. Egypt perceives taking hostile actions against Iran as
inconsistent with its policies towards the region, and thus must avoid.

Not the first time

These reports are in line with experts’ forecasts and predictions that Egypt will
support Gulf countries against Iran only on a political level, and will never
interfere with military force, except with sharing intelligence or military expertise
at best.

Egypt is seeking a balanced political position that does not cut its close ties with
Gulf countries, but at the same time does not cross over red lines with Iran. It is
likely that Egypt expects improved relations with Iran in the future, thus it is more
apt that it plays peacemaker between the neighbouring enemies in the Gulf.
It is not certain whether Egypt will officially adopt this policy or change it later.
However, previous experiences have shown that the Egyptian regime never
overstepped in supporting GCC countries militarily.

It all started with the war in Yemen, which represented a zero-sum-game for
Saudi Arabia during past years. Riyadh tried to end the crisis with force several
times and failed. Reports showed that Saudi Arabia tried to drag Egyptian troops
into battle, but Egypt’s participation did not go beyond stationing navy units on
the Yemeni coast, with no real involvement in any military operation.

Conversely, Egypt refused to embrace the GCC’s view towards the Syrian crisis.
The disagreement among the allies was made public for the first time in February
2016, when Egyptian Minister of Foreign Affairs Sameh Shoukry expressed that
Egypt is upholding its position and that a political solution is the best resort in the
Syrian crisis. He further iterated that Egypt refuses the decision taken by Saudi
Arabia and the UAE in instigating a military intervention in Syria.

“Egypt considers the decision to intervene militarily in Syria as a sovereign
decision taken solely by Saudi Arabia. It is not within the framework of the Islamic
Military Counter Terrorism Coalition,” said Shoukry during a press conference
with his Kuwaiti counterpart.
In September 2016, Shoukry reiterated in an interview in New York that: “the
Kingdom focuses on the necessity of changing the ruling regime or the leadership
in Syria. Egypt does not adopt the same approach.”
The latest incident, and the most apparent one, was when Egypt withdrew,
however unannounced, from the US-led ‘Middle East Strategic Alliance initiative’
or ‘Arab-NATO’, which aimed to confront security challenges in the region, but in
fact, its main purpose was to contain Iran’s hegemony.

According to Reuters, Cairo did not send a delegation to the preparatory meeting
held in Riyadh on April 9, 2019, which was attended by the US, UAE, Kuwait,
Bahrain, Qatar, Oman and Jordan.

The Egyptian policy towards the Gulf dilemma emanates from various coherent
reasons: the absence of solid alliances within the region and of an effective
security system for all countries, as well as the ever-changing political weight of
the Middle East in the world because of the volatility in the balance of power.
Similarly, Egypt tries to remain distant from all regional and international powers.
Even if Egypt takes adversary action towards any of these powers, it always
maintains a distance.

By doing so, Egypt endeavours to win favours with all parties, which is a very
delicate process. Cairo is an important ally to the US, but at the same time, it
enjoys a distinguished relationship with Russia. It enjoys cordial ties with the
Iranian-backed Syrian regime, while trying to remain allied with the GCC countries
for financial support. Moreover, despite its official hostile policy towards Iran, it
maintains connections with Tehran through Syria and Iraq.

However, Egypt cannot ignore that it still has diplomatic relationship with Iran,
even if on a low-ranking diplomatic level. GCC countries want to dissolve this
relationship, but as far as Cairo is concerned, Tehran is not directly threatening its
national security or its political and economic interests.

If Egypt yields to pressure, it may come under security threats from Iran or one of
its allies. The Egyptian government is also gathering that the US-GCC escalation
against Iran may not result in a military strike, rather, it was meant as a warning
for Iran to stay on course. Thus, any military intention from the Egyptian side will
only result in a direct confrontation between Cairo and Tehran, without any real
solution to the crisis.

Egypt Watch unveils a new chapter of corruption by Sisi