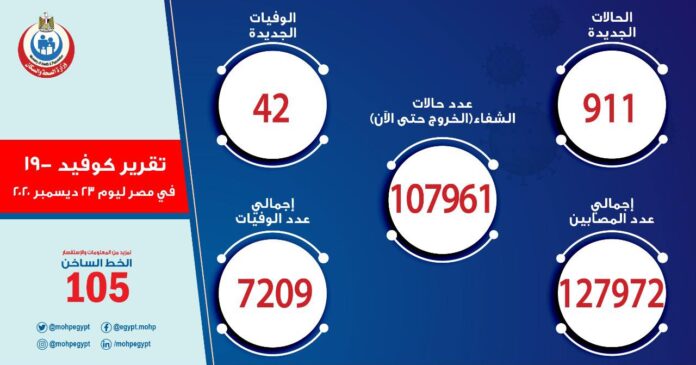 Great jumps in the number of daily infections of coronavirus in Egypt have raised fears and anxiety among citizens and specialists, especially as they come in conjunction with a new strain of the virus.

The number of daily infections in Egypt exceeded 900 cases per day, as doctors agreed that this wave is the most widespread and fierce.

In televised statements, Dr. Adel Khattab, a member of the Supreme Committee for Viruses, said that the number that reaches the ministry daily are the numbers that have been tested. Khattab explained that the announced figure must be multiplied by 10, as the Minister of Higher Education previously stated, which means that the second wave of the virus is currently brutally attacking Egypt.

Khattab added that the daily cases of coronavirus were multiplied by ten because the test show cases of COVID-19 as negative despite the fact that they are infected. Some people who have contracted the virus do not enter the hospital and are satisfied with home isolation. He stressed that the virus is spreading more strongly than we imagine, and the second wave in Egypt is more complicated than the first after the past few months witnessed a decrease in the number of daily infection rates.

Panic about the new strain

Through social media platforms, citizens revealed their panic at the high numbers of infections, amid confirmation by doctors and European countries that this new strain of the virus is more severe than before. Citizens in Egypt criticised the government’s slow reaction to dealing with the danger, as it announced a reduction in the number of employees in government departments, and the decision has not yet been implemented. Citizens demonstrated the spread of the coronavirus in Egypt, with the numbers of infections announced among football players who were swabbed, as the Ministry of Health refuses to conduct swabs for ordinary citizens.

The Egyptian youth football team announced its withdrawal from the North African qualifying tournament for the African Nations Cup after 17 players were infected with coronavirus, in addition to the infection of some members of the technical staff. The World Health Organisation announced the spread of the new strain of coronavirus in three other countries after its discovery in Britain, Denmark, the Netherlands, and Australia, which raised fears in Egypt.

Citizens called on the government to quickly import and circulate the Pfizer anti-virus vaccine, amid criticism and concerns about the Chinese vaccine, which the Egyptian government insists on promoting. Citizens attacked the government’s slow and lax measures to prevent gatherings, especially in light of the recent holding of some concerts and film festivals.

For his part, Dr. Ayman Tharwat, a doctor in an isolation hospital, stated that there is an increase in occupancy rates in isolation hospitals, indicating that there is a daily increase in the number of coronavirus infections. In the same context, doctors confirmed that fever hospitals are facing a major crisis after being filled to the brim with people infected with the virus, through their accounts on social networking sites. Doctors clarified that fever hospitals could no longer accommodate additional numbers of infected people, calling on citizens to exercise caution and protect themselves and not to disregard the second wave.

Dr. Rehab Sayed, a member of Corona Control in a government hospital, said that winter is behind the increase in cases because it takes a long time for the effects of the virus to wear off. Rehab advised citizens to wear masks and not go out unless necessary, take all preventive measures, continue washing their hands with soap, and maintain social distancing.

For his part, Dr. Yahya Abdel-Moamen Makki, an expert in virology at the University Hospital in Lyon, France, said that Egypt needs a year to vaccinate 88 million citizens. He stressed that in order to eliminate the pandemic, citizens must be vaccinated continuously for a period of two years, and the vaccination must be consecutive, covering at least 70 per cent of the citizens in Egypt to start reducing the spread of the pandemic and its effects. He added that to eliminate the virus completely, the vaccination of 90 per cent of the Egyptian people must be the target.