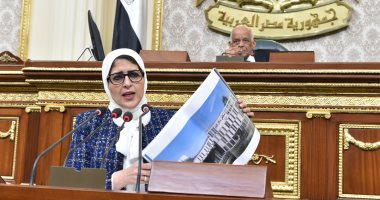 The Egyptian parliament has held the first interrogation against the
government since January 2016, submitted by Deputy Muhammad al-
Husseini against the Minister of Health and Population Hala Zayed, regarding
the deterioration of the Boulaq al-Dakrur General Hospital in Giza
Governorate.
The interrogation turned into a farce, in which 33 of the 66 deputies who
signed the request to withdraw confidence from the minister were absent
which meant it had to be dropped.
Most of the interrogation focused on supporting the president and praising his
recent health initiatives.
Al-Husseini called for the withdrawal of confidence from the minister, due to
the deterioration and neglect of the health sector, especially in governmental
hospitals, holding her responsible for the marked collapse of health services
provided to citizens.
Al-Husseini stressed that the hospital suffers from a shortage of doctors and
nurses, a shortage of medical devices and equipment, in addition to the
exacerbation of sanitation, hygiene and water shortage problems, noting that
the hospital serves approximately four million citizens, and that the
deterioration of conditions inside it is an example of conditions in all
governmental hospitals.
MP Diaa Daoud called on the minister to submit her resignation, stressing
that all the achievements that the ministry claimed in the comprehensive
health insurance system are nothing more than false propaganda.
Daoud cited the horrific accident that occurred in Port Said recently, killing 23
citizens, where the air conditioning in the intensive care unit and the hospital
facades were broken, despite the fact that it was only a few months since it had
opened.