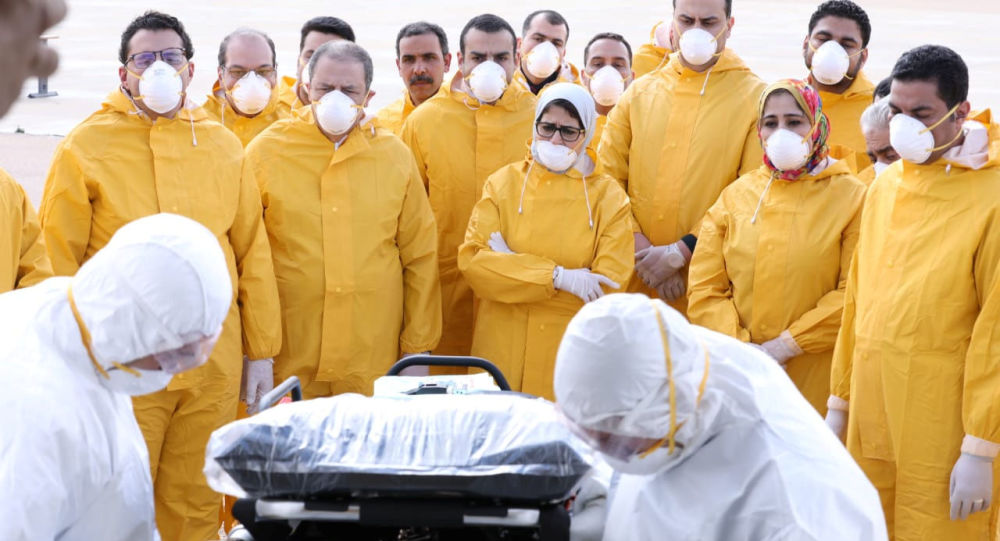 On February 27, the French Ministry of Health announced a significant increase in confirmed cases of coronavirus, at 38 cases, including two in Egypt on a tourist visit, from February 5 to 16. The number of total confirmed cases coming from Egypt increased to six cases as it was confirmed in travellers from Canada and Taiwan. This is happening while Egypt strongly denies the existence of any cases inside the country, except for one case that has been cured. “The Ministry of Health does not lie, but does not know,” an informed source inside the ministry told Egypt Watch. The source, who declined to be named in order to preserve his security, continued: “The symptoms of infection with the coronavirus are similar to other types of influenza, and the ministry is unable to examine all those infected with these symptoms. In case of suspicion, a sample is taken and sent to the central laboratories, which have not yet confirmed any cases of the virus. This does not mean that there are no cases but that there are no infections in the samples that were analysed.”

Tariq al-Rifai, Director of the Unified Governmental Complaints System, announced that they received 21 suspected cases of coronavirus infection and that they were all negative. “The Ministry of Health addressed the hospital to prepare for the virus, but the preparations are more worrying than reassuring,” Magdy Boutros, a physician at the Chest Diseases Hospital in Cairo, told Egypt Watch. “All we did was replace the old sign of the avian influenza with a new for one for coronavirus, and the medical staff’s vacations were cancelled.” “There are no devices to detect the virus, and there are no additional preparations for infection control other than the N95 mask that we have been using for many years, and so far no suspected case has come and if it comes we will only provide a respirator. That’s all. So, any patient that dies due to coronavirus will be diagnosed with pneumonia,” Boutros explained. Magdy Selim (a pseudonym for security reasons), who is also a physician at the Chest Diseases Hospital, says: “Egypt has avian influenza until now. The Ministry of Health is too weak to scientifically face any epidemic. The new coronavirus will have the same fate as the avian influenza. We have neither diagnostic devices nor capabilities to analyse samples of all patients showing symptoms in all hospitals or even chest diseases hospitals.” “During the first weeks of the disease’s spread globally, we did not know how to diagnose it until the World Health Organisation sent devices and information. These devices are located in very few places and cannot absorb all possible infections, especially in the winter during which the most common influenza cases occur. Also, citizens’ lack of confidence in the government makes them not trust its procedures, which happened with a patient who was suspected of being infected. Before they could take the sample, he escaped from the hospital,” Selim added.

Another source at the Ministry of Health told Egypt Watch: “All private hospitals have been instructed not to conduct an analysis of the coronavirus infection, and in case of suspected infection, [patients are] sent directly to a chest hospital affiliated to the ministry.” “Even airports do not have virus analysis and detection devices, and all they have is a thermometer to measure temperature. If a traveller has a temperature of 38 degrees or more, he will be transferred to the hospital so they can take a sample from him, in addition to tightening the control procedures for those coming from countries experiencing an outbreak such as China, Iran, South Korea and Italy,” the source added. Cairo University issued a leaflet, which Egypt Watch got a copy of, with information on the hospitals dealing with the virus, suspected cases and what people who have had contact with the virus carrier should do, whether from relatives or members of medical staff. But this leaflet clearly indicated that there are no laboratory devices for analysing samples and that only external symptoms should be taken into account, i.e., a rise in temperature to 38 degrees or more, coughing, and shortness of breath. If confirmed, the patient will be placed in a quarantine inside a hospital and a sample sent to the central laboratories. If confirmed, the case will be transferred to a chest hospital.

A source inside the Doctors Syndicate told Egypt Watch: “The state of health care in Egypt is deplorable. It is not possible it will to cope with the epidemic. The price of the coronavirus analysis is EGP 400 pounds ($25.56), and it is only available in the central laboratories of the Ministry of Health. According to the instructions, the doctor is assumed to report any suspected case, especially if it was coming from one of the countries where the epidemic occurred. This does not happen because that will be followed by a quarantine for the doctor himself or herself for 14 days.” “It seems Egyptian doctors have no way to fight coronavirus except through hot anise and mint,” the source said sarcastically.

The Prime Minister of Egypt, Mostafa Madbouly, has stated that contact has been made with the French side to obtain any information regarding the mentioned cases. Madbouly explained that all workers who were in contact with the tourist group were examined. He added that the government had agreed to import devices at a cost of EGP 150 million (approximately $10 million). Qatar and Kuwait have banned entry to travellers from Cairo, along with strict measures from Saudi Arabia. According to official Egyptian data approved by the World Health Organisation, Egypt has confirmed one case of infection, a young Chinese traveller, who left the Egyptian quarantine headquarters in Marsa Matrouh after recovering from the disease. Egypt Watch has published exclusive testimonials from inside the quarantine, which clarified how unprepared the government is on dealing with coronavirus. The number of hospitals in Egypt is 691, which are affiliated with the Ministry of Health, in addition to 89 university hospitals and 1,157 private hospitals, according to the latest statistics issued by the Central Agency for Mobilisation and Statistics. Also, Egypt has a population of more than 100 million people.

Preventing prisoners from receiving letters is a new way to punish...