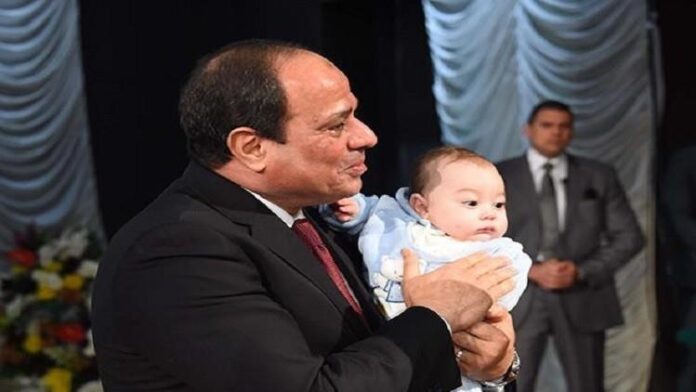 Hours after Abdel Fattah al-Sisi’s statements about the danger of the population increase, Egyptians were bombarded with statements issued by official religious institutions and prominent clerics regarding the issue of birth control. It seemed as if al-Sisi’s statements, during the opening of a medical project last Tuesday, were a green light for the Ministry of Endowments and the House of Fatwa in particular, for both of them to start a kind of propaganda campaign aimed at convincing Egyptians of the need for birth control and its religious legitimacy.

The Egyptian Dar Al Iftaa led a campaign on social media under the title “Birth Control is Permissible,” through which it presented the religious viewpoint on the matter, pointing out that “there is no objection to the state taking whatever means and measures it deems to regulate the birth process and encourage people to do so.” The Egyptian Mufti, Shawqi Allam, attributed birth control methods to the Prophet’s era when the Companions applied “isolation,” which the Prophet did not forbid them.

Although there was no official statement from al-Azhar, activists affiliated with the regime broadcast previous statements by al-Azhar Sheikh Ahmed al-Tayeb, in 2017, in which he emphasised that there is no sanctity in birth control. This was at the National Population Conference in 2017 when al-Tayeb said in a speech delivered on his behalf by the former representative of al-Azhar, Abbas Shoman, that the Messenger spoke about the demographic issue at a time when there was no population increase. He authorised isolation between the spouses by agreement between them.

Simultaneously, the scientific advisor to the Grand Mufti of the Republic, Majdi Ashour, came out, stressing the need for birth control for the sake of what he considered “a comfort for all people.” Ashour criticised what he described as the extremist currents that prohibit birth control, noting that the statements of the leaders of these currents contradict their actions, saying, “They regulate birth control.” On this point, some preachers and those calling themselves researchers in the affairs of Islamic groups came out to promote that the Brotherhood is the cause of the increase in population in an attempt to overburden the state. The preacher and researcher Muhammad Dahroug said that opposition to family planning initiatives and campaigns and family planning “has become a legacy, and it has become more commercial than a religious or social issue when organising the Brotherhood.” In press statements he added that there is opposition to the opposition: “The contemporary reality confirms that they launch campaigns and initiatives against the national vision of the state.”

At the time, a member of the Islamic Research Academy, Abdullah al-Najjar, said that religion should not be used as an obstacle to facing overpopulation, adding: “Children should not be born if they are not raised properly.” He continued: “What we need is not a large number of children, but rather a strong offspring and a decent person.” Al-Najjar continued: “The children of Turkey and the Brotherhood consider increasing births a devotional issue, they say, “Our Lord is the Provider, and it is a right that he intends to be invalid. They want to exhaust the state and families so that society does not advance and that the offspring be impotent.” However, a look at social networking sites and comments on what was published by religious authorities affiliated with Egypt’s authority indicates that the success of this campaign is not certain.

Cyberspace was filled with tweets and publications critical of the government’s approach and then its official religious dimension on the issue of birth control. Perhaps what some mosques in Egypt witnessed, on Friday, when some imams refused to talk about birth control halting the Ministry of Endowment’s plan and even some openly rejecting this campaign and refuting its validity, is evidence of popular rejection of the government plan.

The imam of a mosque in the Mansouriya region in the governorate of Giza, who preferred not to be named, said that the sermon of the Minister of Endowments would cause a lot of controversy in Egyptian society, indicating that the religious discourse should be balanced, and not choose sentences and phrases that fit the direction of the state. He added, “It is strange to invoke the saying (because offspring who have wealth is better than for poor people to ask them to ask people), which not agree to the Qur’an verse (Let those have the same fear in their minds as they would have for their own if they had left a helpless family behind: Let them fear Allah and speak appropriate words).

For her part, Psychological Consultant Nevin Mohsen said that Egyptian society would not be able to respond to these repeated pressures in the speech about birth control. She also said that “the words used in advice must be taken into consideration, and every person must first test advice on himself.” She wondered, “How can the Egyptians respond to birth control when those who advise them have a large number of children?”

It is noteworthy that the government plan to reduce the size of families was revealed by Minister of Planning Hala al-Saeed when she said that the government requests that the number of births per family does not exceed the average of 1.8 children per woman in 2042 and 1.6 children in 2052. It is noteworthy that the total fertility rate in 2017 was 3.4 births per woman. Although the government’s plan appears strict, it did not satisfy al-Sisi, who expressed his belief that the targeted reproductive rate is not appropriate for development plans, and commented on the minister of planning’s speech, stressing the need for the target rate to be less than one child per woman.

Since the late President Gamal Abdel Nasser’s era, the state has been aware of the population increase and has dealt with it as a threat, not wealth. Consequently, many official entities were established whose work involves convincing citizens to regulate or limit birth control over the course of decades.

National campaigns were launched for the sake of birth control, and their work intensified during the first and second decades of the rule of the late President Hosni Mubarak, and their impact may have appeared on population growth rates, but success remained within a narrow framework that did not satisfy the ruling authority. During recent years, the state tried to restore birth control campaigns, so the government launched several initiatives such as “two is enough” to encourage people to have two children per family. It also launched the “Your Right to Organise” initiative, which seeks to distance the lives of those born in the family, and the “Accelerating Local Response to the Population Issue” project, aiming to control overpopulation and improve its characteristics. Also, universities recently approved educational curricula on the issue of overpopulation, and the Ministry of Endowments has intensified its efforts to convince citizens that birth control is a religiously legitimate matter.

The birth control plans did not stop at the borders of initiatives but extended to the limits of hinting at denying the benefits the government provides to citizens through draft laws to regulate birth. Some of the legislative articles presented stipulate that the government subsidies that families benefit from will be reduced, according to the number of births, and that a family with two children enjoy full support that includes free education, health insurance, and catering services. In contrast, the support is reduced by 50 per cent if the third child is born, and support is completely withdrawn after the fourth child is born. As the government begins to waive advantages and enforce penalties, the extent to which families accept birth control remains a key factor in the official target’s success or failure.

The regime is using cinema as a propaganda tool against dissidence