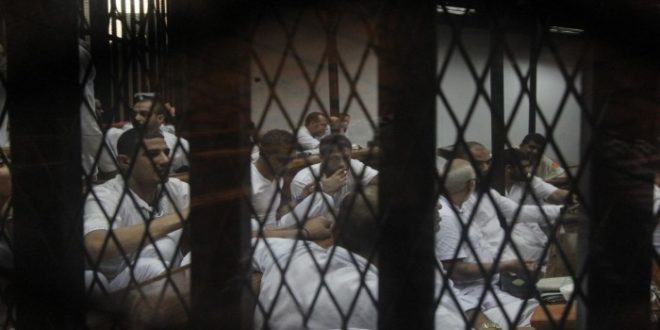 Under conditions of the widespread of the new Coronavirus in Egypt, the Human Rights Organizations and societal activist voices called for the immediate release of tens of thousands of people in Egyptian prisons. Human rights defenders affirm that prisons and places of detention in Egypt suffer mainly negligence, lack of hygiene and overcrowding, and are not fit for life in natural conditions, as well as the conditions of the spread of the Covid-19 pandemic. Human rights activists questioned whether revenge against political opponents was more important to the regime than protecting the homeland from a virus outbreak. These demands increased referring that the Iranian authorities decided to release about 70,000 prisoners, against the backdrop of the Coronavirus, which is rampant in the country. Human rights organizations estimate the number of political detainees in Egypt at more than 20,000; most of them spend long periods in pretrial detention, meaning that no convictions have been issued against them. Egyptian law states that the accused is innocent until proven guilty, but the Egyptian authorities have used long prison terms as punishment without any court ruling of conviction. The continued imprisonment of detainees in light of the spread of the Coronavirus means that thousands of innocent people, who are being held in Egyptian prisons, are at risk of contracting the epidemic.

Families of detainees on social media said that Coronavirus infections had already appeared in Gamasa prison, in the north of the country, and there are 7 detainees at least infected, but that the Egyptian authorities had not officially announced this. The Egyptian authorities decided to prevent prison visits 10 days, which could be extended, claiming that as a measure to prevent the transmission of the disease to prisons. But doctors said that decision was meaningless because the virus could be transmitted into prisons by mixing detainees with prisoners and staff who might transmit the infection indoors. Human rights experts have warned that if the infection is transferred to prisons that suffer from overcrowding and lack of cleaning, any prison administration will not be able to control the situation or impose quarantine on the infected. The families of the Egyptian detainees demanded the immediate release of their families from the Egyptian prisons, due to the deteriorating health conditions inside the Egyptian prisons and the spread of diseases inside them, which caused the death of more than 1650 prisoners during the past five years, according to the data of the “Voices behind the Walls” initiative, an Egyptian human rights initiative concerned with defending political detainees in Egypt.

The family of the journalist writer, Adel Sabry, demanded that Adel Sabry be released immediately, and all prisoners of conscience, after news of the spread of the Coruna virus and the risk it might cause to the lives of the prisoners. Adel Sabry, one of tens of thousands of political detainees, is being held in pretrial detention, because of translating a New York Times report that exposed of bribes to voters during the recent presidential election. Sabry’s family considered that preventing visits is “an additional punishment for the detainees by denying them the vision of their families”, and that it is necessary to release Sabry and every other prisoner of opinion, because there is a real threat to life. Journalist Adel Sabry, the editor-in-chief of Masr Al-Arabia news website, will complete two years of pretrial detention next April 3, as he was arrested on this day two years ago. Adel Sabry is one of 30 journalists currently imprisoned in Egyptian prisons, according to estimates by Egyptian Journalists Defense associations.

The Committee for Justice Organization (CFJ) has described detention centers and prisons in Egypt as “Death centers more than law enforcement centers.” CFJ monitored the death of 958 people between June 30, 2013, and November 30, 2019, in prisons and various detention facilities. Human Rights Activists insist on calling for the release of political detainees as a precaution, to alleviate prison overcrowding, at least temporarily. This comes while reports and statistics from Egyptian and international human rights organizations indicate that cases of pre-trial detention have reached a number unprecedented in the history of Egypt. The urgent demands for the release of prisoners come on the basis of the same logic of the Egyptian government that demands the prevention of major human gatherings and may be the disruption of the study. It is worth noting that 23 new prisons were established in Egypt between 2013 and 2018, bringing the country’s number of prisons to 54 in addition to 320 detention centers in police stations and centers. However, the Egyptian prisons remain crowded and crowded, and they bear more than their legally determined capacity, as the number of political prisoners in Egypt is estimated at more than 60,000.