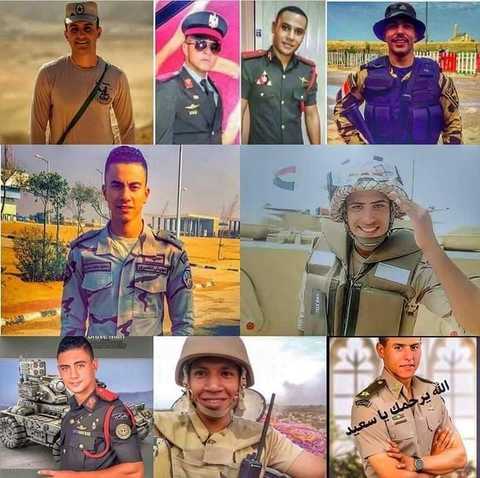 A spokesman for the Egyptian Armed Forces said that an explosive device blew up an armoured vehicle in the city of Bir al-Abd in North Sinai, killing and wounding an officer, a noncommissioned officer and eight soldiers. The armed forces spokesperson, Colonel Tamer al-Rifai, stressed on his official Facebook page that the armed forces are continuing their hostilities “against terrorist elements to preserve the security and stability of the country.”

Commenting on the incident, Egyptian General Abdel Fattah al-Sisi said: “The forces of evil are still trying to kidnap this country.”  Al-Sisi said on Twitter that “the hand of treachery has killed our heroic sons south of the city of Bir al-Abd,” adding that Egypt was able to destroy what he described as “the hopes of these malicious souls.”

The attack has killed the largest number of people in one attack in several months, which obligated the Egyptian general Abdel Fattah al-Sisi, and al-Rifai, to give statements following the incident mourning the soldiers. The attack took place in Toffaha village south of Bir al-Abd, a relatively remote area, which caused the delay of the arrival of ambulances because access to that area requires time and prior coordination with the armed forces, for fear of an ambush by Sinai Province (the local branch of ISIS), which may intercept ambulances.

The attack took place just before the Maghrib Azan call to prayer, at a time when everyone was busy breaking the fast and not expecting a bloody attack like this, in this particular village. The army strengthened its forces in and around the city in the aftermath of the bloody attack, bringing in forces from the Arish and Qantara camps.

The mobilisation of the military build-up coincided with air strikes launched by the Egyptian Air Force on the outskirts of Bir al-Abd, targeting what is believed to be members of Sinai Province. Sinai Province has turned the city of Bir al-Abd in recent months into a new square for its military attacks against Egyptian security forces.

The organisation’s move to the Bir al-Abd area came after it reduced its presence in the city of Al-Arish, due to the fierce military operations in the north east of Sinai. The latest attack is a duplicate of other similar attacks in which the organisation has used almost all the same methods, and the same timing, over the past six years.

Military experts describe the last attack as repetitions of other attacks that have been launched by armed groups for years. The timing of the latest attack before breakfast “is a repeated date in which the armed groups launched its bloody attacks against the Egyptian army, including the famous Rafah attacks that killed and wounded dozens of soldiers in 2012.” Targeting security points is a preferred method for the group, as happened in the attack on the security pillar in 2017, which killed a group of Egyptian thunderbolt forces officers.

Security experts criticise the repetition of these similar attacks and the fact that no real measures have been taken to prevent them. These attacks, which have been repeated during the month of Ramadan, caused popular anger because they do not observe the sanctity of fasting. Usually, the armed organisation exploits the fact that the soldiers are breaking their fast, coinciding with the Maghrib Azan to carry out bloody attacks.

Human rights defenders warn that the disproportionate reaction of the Egyptian army, and the targeting of innocent people, may be a reason people join these armed groups, if people feel wronged by the Egyptian army’s actions.