EgyptWatch
Home Reports Al-Sisi orders the armed forces to prepare for a fight: Against who?
Facebook
Twitter
WhatsApp 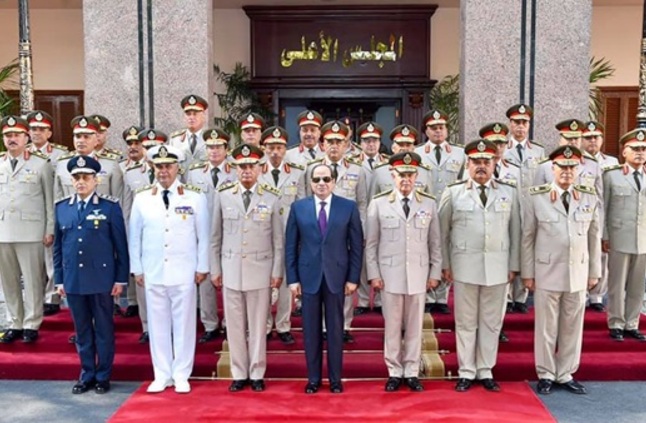 Egyptian General Abdel-Fattah al-Sisi asked the armed forces to “show the utmost readiness and combat readiness to protect Egypt’s national security,” which raised a number of questions regarding the timing of this statement.

Observers say that this is a remarkable development on the Egyptian scene, with al-Sisi waving the possibility of using military force, but without mentioning explicitly who is targeted by these statements.

The spokesman for the president, Bassam Radhi, said that during the meeting, al-Sisi was briefed on the overall security situation on all three major strategic directions and the efforts of the armed forces to control the borders and pursue terrorist elements, especially in North Sinai as well as the western region.

According to the statement, al-Sisi instructed to continue to show the utmost readiness to protect Egypt’s national security, expressing appreciation for the efforts of the armed forces and their sacrifices made in exchange for the homeland and for preserving its security, safety, stability and the capabilities of its people.

Observers linked al-Sisi’s meeting with the Minister of Defence and his request to be prepared at the highest level of the military, to three possible factors: the first is Libya, and the second is the Ethiopian Foreign Ministry’s announcement that it will start filling the Renaissance Dam reservoir, and the third is continuing clashes with armed groups in the Sinai.

In Libya, the Government of National Accord (GNA) took control on Monday of the Al-Watiya airbase located 140 kilometres southwest of the capital Tripoli, after it was under the control of forces loyal to the Egyptian-backed General Khalifa Haftar. The western military zone that al-Sisi referred to is one of the four military areas of the Egyptian Armed Forces and is based in Marsa Matruh, near the Libyan border.

Al-Sisi is considered one of the most prominent supporters of Khalifa Haftar, and the Egyptian army was responsible for training Haftar’s forces to use a number of new weapons. Al-Watiya airbase is considered one of the most important Libyan military bases in the west, from which Haftar launches its continual attack on the capital, Tripoli, the headquarters of the GNA.

The process of controlling al-Qaeda comes a few weeks after the Al-Wefaq government regained control of six cities, including two strategic cities (Sorman and Sabratha) west of Tripoli.

In Ethiopia, Ethiopian Foreign Minister Guido Andargashio announced, in a letter sent to the Security Council on Monday, that his country “sees no reason to delay the filling of its huge dam,” despite Egypt’s warnings that such a move could destabilise the region.

The Grand Ethiopian Renaissance Dam has been a source of tension in the Nile River Basin since Ethiopia launched the project in 2011, and Addis Ababa says the dam is important to its economy, while Cairo fears that it will affect the amount of Nile water that provides almost all of Egypt’s water needs. The talks, held earlier this year between the two governments and Sudan, the other concerned country, failed to achieve a breakthrough.

Al-Sisi’s requests for combat readiness come in the wake of a heavy military operation launched by the Sinai Province organisation on a security point, which killed 10 Egyptian soldiers.

Although the Egyptian army has been waging a major ongoing military operation since 2018, this process has not resulted in complete security control in Sinai. But observers say that al-Sisi’s messages were not intended for the interior, and that military operations heavier than that occurred before that without al-Sisi making similar statements. This means that al-Sisi’s statements were directed west (towards Libya), or south (towards Ethiopia).