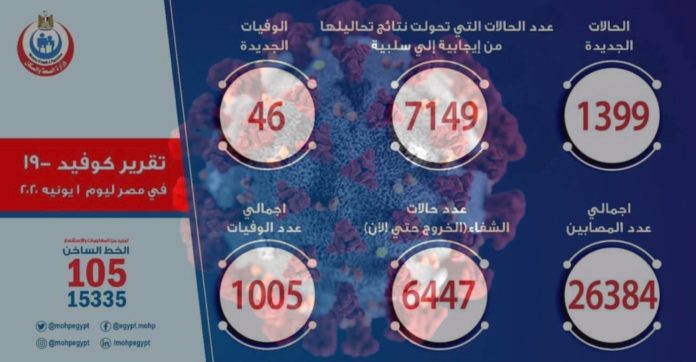 On Monday, the Egyptian Ministry of Health announced the registration of 46 new deaths from coronavirus, bringing the total to 1,005 deaths. According to these official statistics, the country’s death rate is 3.8 per cent of infection. The Ministry also confirmed the registration of 1,399 new cases of the emerging coronavirus, bringing the total number to 26,384. The ministry said, in a statement, that the cases of recovery increased to 6,297, with 410 patients being discharged from quarantine hospitals, after their negative analyses matched twice in 48 hours, according to the work system established by the World Health Organisation.

The Egyptian Minister of Health Hala Zayed announced that Cairo, Giza, and Qalyubia, the constituent governorates of Greater Cairo, had registered almost half of the number of cases. She admitted that housing for mild and identical symptoms in hostels and youth centres will now be dispensed with, and this will be replaced by isolating at home. These developments come after hours of working with reduced preventive measures from Saturday 30 May.

The Egyptian government decided to reduce curfew hours to start from 8pm until 5am, reduced from 6am. It also decided to reopen shops and malls from 6am to 5pm, while obliging all citizens in the streets to wear masks. The number doctors dying in Egypt from coronavirus has risen to 34, after the General Syndicate of Doctors announced the death of six new doctors during the past 24 hours. The Physicians Syndicate recorded more than 380 infections among doctors, other than deaths and infections among members of the rest of the medical staff, including nurses and technicians, due to the absence of preventive measures, and the lack of medical supplies in hospitals.

On Monday, the Egyptian army announced the arrival of two military transport planes carrying medical aid to the Democratic Republic of the Congo and Zambia. Anger prevailed among the pioneers of social networking sites in Egypt, due to the insistence of the regime of General Abdel Fattah El-Sisi to send medical aid to European and African countries at a time when Egyptian medical teams suffer from a lack of protective supplies. Official estimates have begun to indicate that the numbers of people infected with coronavirus in Egypt threaten a disaster.

The Minister of Higher Education, Khaled Abdel Ghaffar, said that the actual number of corona infections is not around 25,000, but rather “exceeds 117,000 infections, and more than 6,000 deaths,” in the most pessimistic forecast of the spread of the virus. On Monday Abdel Ghaffar suggested that the official infection numbers would reach 30,000 between June 4 and 5, then 40,000 between 10 and 13 of the same month. He pointed out that according to the default models, the number of infections can be multiplied by five, and deaths by 10, to reach the actual numbers of total infections and deaths.” He admitted that “the number of infections recorded in Egypt currently represents 20 per cent of the reality, and the rate of growth in the spread of the virus has increased from 5.5 per cent to 6.5 per cent, which is a variable and important percentage in determining the hypotheses of measuring numbers. Clinical studies in Egypt outperformed several countries in the Middle East, including Iran and Jordan.”