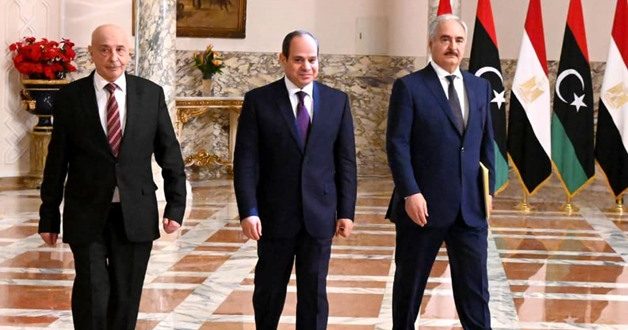 On Saturday, Egyptian General Abdel Fattah al-Sisi launched what he called the Cairo Declaration to solve the Libyan crisis and preserve the unity and stability of Libyan lands and the capabilities of its people. This came after he received the Libyan general, Khalifa Haftar, and the Speaker of the Parliament in eastern Libya, Aqila Saleh. Al-Sisi said, during a press conference in the presidential palace, that the Cairo Declaration is a message to the world, and includes a firm desire to enforce the will of the Libyan people to stability and reconstruction, and to preserve the country’s sovereignty and unity, and put Libya’s interest above everything.

The Cairo Declaration, according to al-Sisi, included respect for all international efforts to resolve the Libyan crisis in its political framework, and a 48-hour ceasefire throughout Libyan territory. The declaration stated the dismantling of what he described as “militias” in reference to the forces of the internationally recognised government of National Accord (GNA), handing over their weapons to the Libyan National Army (Haftar militia), and expelling foreign mercenaries out of the country. The declaration also includes completing the work of the 5 + 5 Defence Initiative under the auspices of the United Nations, ensuring fair representation of all three of Libya’s provinces to administer governance in Libya for the first time in the country’s history, and holding fair elections. The declaration indicated the necessity of a fair and transparent distribution of wealth to all citizens, without any militias seizing any of it, and launching a constitutional declaration regulating the political process in the country.

Al-Sisi pointed out that Egypt looked forward to the cooperation of all countries to support this constructive step for Libya’s strong return to Libyan society, and to invite the eastern region to go to the United Nations in Geneva, in the presence of representatives of the United Nations, the African Union and neighbouring countries. Al-Sisi considered the Cairo Declaration an important initiative to end the violence in Libya, and the beginning of a new phase for the return of normal life to Libya.

This initiative was announced in the presence of representatives of one of the parties to the conflict in Libya (Haftar and Saleh), while the other party (GNA) was completely absent, as Cairo did not invite them. There was no official comment from the GNA on al-Sisi’s initiative. Observers point out that before al-Sisi’s announcement, the GNA launched the military operation “Paths of Victory,” to liberate the cities and towns of the east and centre of the country, foremost of which was Sirte and al-Jafra from the militia of Khalifa Haftar.

Al-Sisi’s initiative includes calling for a ceasefire, as well as the holding of new elections in Libya, which have long been called for by the GNA. However, it appears that the Cairo Declaration was born dead, and that the chances of its success are almost non-existent, and therefore the GNA did not care to comment on it.

One of the most important items that made the Cairo Declaration truly dead is its repeated description of the forces of the GNA as militias, and the stipulation that they should be dismantled and their weapons handed over to Haftar’s forces, which the announcement described as the Libyan National Army (LNA). The announcement came at a time when heavy losses continued for Haftar’s forces, as he lost almost all of his strongholds in western Libya, and the forces of the National Accord Government began preparing to attack his forces in the centre of the country. This announcement means, in practice, that the national accord government should give up its weapons in favour of the Libyan general who has been attacking the capital, Tripoli, since April 2019 (more than a year), and has not agreed to any political solution or a ceasefire, except after heavy losses were inflicted on him.

A Libyan diplomat told Egypt Watch that the Cairo Declaration appeared to be out of time or a part of history, and when you read it, you feel that al-Sisi does not know or is not aware of the developments of the battles on the ground during recent months. Haftar’s successive losses in Libya come amid ambiguity about the Egyptian position on supporting Haftar militarily on a large scale or declaring military intervention in the country.

Egyptian sources told Egypt Watch that Haftar and Saleh asked the Egyptian regime for more military support and perhaps direct military intervention, but they did not receive a clear response. The Egyptian regime’s position did not go beyond issuing brief statements rejecting the prospects and consequences of the military escalation. Egyptian sources familiar with the Libyan issue said that the Egyptian regime was finally convinced that after Haftar’s recent setbacks, the Libyan general had failed militarily and regionally, and he had disappointed those who had gambled on him from the start and supported him financially and militarily.

The problem facing the Egyptian regime is that it has no alternative as the GNA has stepped up its accusations against the Egyptian regime. But an Egyptian intelligence source told Egypt Watch that Egypt has not given up on supporting General Khalifa Haftar and that Egypt withdrawing support is just rumours.

The source pointed out that Haftar’s recent losses do not mean the end, because the war is a contest, and there are losses and victories, the important thing is who wins in the end. However, with regard to Egypt’s direct military intervention or increased military support for Haftar’s forces, the source said, “According to the current situation, regionally and internationally, this is the most that Egypt can provide,” but he didn’t give further clarification.

Biden’s victory: Will it strengthen the thorn of the opposition in...