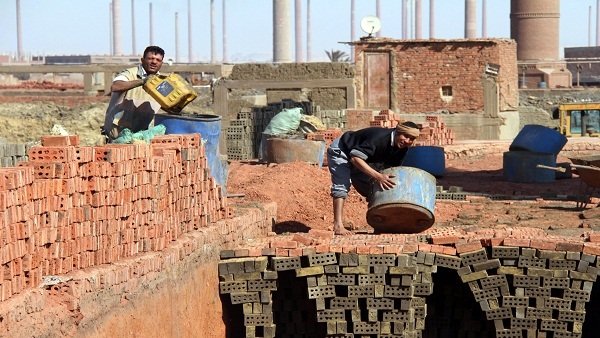 Business has stopped in about 70 per cent of the clay brick factories in Egypt, as a result of the decision taken by the regime to stop construction operations.

Khaled Abu Ghraib, the spokesperson for the Association of Clay Brick Factory Owners, revealed that 2,000 factories, out of about 2,850 factories nationwide, stopped production and their workers were displaced due to their owners’ inability to pay their salaries. He said that the main reason for the closure was due to a decision to stop construction for a period of six months, and before that the coronavirus crisis, as sales fell by up to 75 per cent. He pointed out that this decision harmed the interests of more than 350,000 workers: “I have not witnessed anything like it throughout my life in this profession… and in which I have worked since 1986.” He called on the government to intervene to save this industry, by opening new marketing outlets, rescheduling the debts of some companies while prolonging the repayment period and granting them operating loans with an interest rate not exceeding five per cent, while supporting the displaced workers economically and socially.

In May this year, Egyptian Minister of Local Development, Mahmoud Sharawy, issued Resolution 181 of 2020, instructing governors to stop issuing licences for building, expanding, modifying, or supporting construction work for private housing in greater Cairo, Alexandria, and all major cities, in addition to stopping the completion of construction work for buildings until construction requirements and conditions are confirmed.

The construction sector includes 3.5 to 4 million workers, technicians, and engineers directly, according to statements by the Ministry of Housing spokesperson Amr Khattab. The real estate sector contributes to 16.2 per cent of the gross domestic product, and the rate of growth in the construction and real estate activities increased from 225 per cent in 2010/2011 to 952 per cent in 2016-2017. The Egyptian Centre for Economic Studies has warned that the occurrence of any crisis in this sector will negatively affect the economy in general.

Growing international momentum to advocate for human rights in Egypt

Mubarak’s parliament speaker: Ignoring the opposition is a big mistake