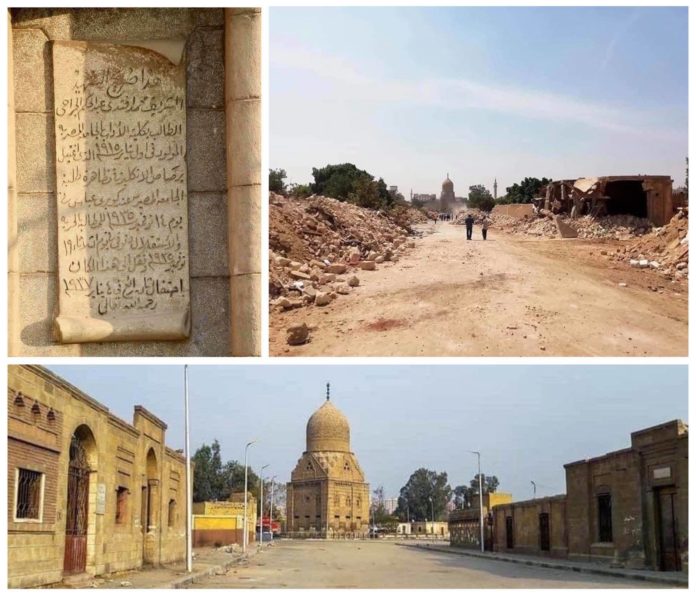 The Egyptians woke up on Sunday, July 19, to pictures of bulldozers breaking into a number of archaeological buildings in Manshiyat Naser, where Mamluk graves (or the Mamluk cemetery) is located. The cemetery dates back five centuries and contains the graves of a large number of important historic figures. The cemetery was destroyed to make way for a new highway named “the Paradise Axis.” The tombs’ demolition was carried out despite their location within Historic Cairo, which is considered by the United Nations Educational, Scientific, and Cultural Organisation (UNESCO), a world heritage site. It was registered as a historic and heritage area because it contains many cemeteries and yards, especially those related to historic figures or of distinguished architectural design.

The Mamluk cemetery is the oldest Islamic cemetery in Egypt. Back in the day, it was called Abbasid desert. It was chosen by the Mamluks who ruled Egypt between 1250 and 1517 to be an arena for horse races. They also built schools and other buildings. Later on, it became a graveyard for many of them who bequeathed their burial there together with a large number of historic figures connected to that era like the Sheikh of Egyptian Historians Ahmed bin Ali al-Maqrizi, known as Taqi al-Din Al-Maqrizi” (1364-1442). The cemetery also contains the graves of many historic figures from the modern age like prime ministers, 1919 revolutionary symbols, and symbols of the struggle against the English occupation.

Salem Abdullah, one of the cemetery’s officials, told Egypt Watch that the government informed them of its intention only eight days before it started the demolition and dredging works. The government notified the cemetery caretaker to move the remains of his dead from the family graveyard located within the area of the Paradise Axis that the government is working on. The government, however, did not provide an alternative cemetery, and they still do not know what to do because there are so many tombs that were demolished without the slightest consideration for their sanctity.

The Ministry of Tourism issued a statement via its official page on social media stating that the news about destroying the Mamluk cemetery is completely untrue, according to the head of the Islamic, Coptic, and Judaic Antiquities Sector, Osama Talaat. He added that the Paradise Axis is located away from the registered Islamic monuments of the Mamluk cemetery and that the tombs in the published images (i.e. those that were demolished) were not registered Islamic or Coptic monuments, but modern, individual graves.

The secretary-general of Egypt’s Supreme Council of Antiquities had ordered the formation of a scientific-technical committee to examine the tombstones that might contain ornamental or written carvings to be studied and to look into the possibility of displaying some of them in museums as a part of the distinguished Egyptian heritage.

The statement caused many to express their indignation at the ministry’s admission that what was demolished was in fact so valuable that it was to be displayed at the museums and that their only argument was that what was destroyed was not something registered at the ministry. One of those who was angered by what happened was Dr. Soheir Zaki Hawas, professor of Architecture and Urban Design at Cairo University.

Dr. Soheir wrote on Facebook: “This area of the cemetery is a part of Historic Cairo, which is a world heritage site according to UNESCO. It is also registered as a protected area pursuant to law no. 119 of 2008. Many of the tombs and yards there, especially those related to historic figures or of distinguished architectural design, are registered as heritage sites under law no. 144 of 2006. The issue of building the axis was proposed several years ago, but was rejected by the National Organisation of Urban Harmony that I represented during the meetings held to discuss that matter.”

Hawas added that Historic Cairo was registered as a valuable world heritage site in 1979 by UNESCO, and is registered of historic value pursuant to law no. 119 of 2008 by the Supreme Council for Planning and Development in July 2009. In 2010, The National Organisation of Urban Harmony issued a booklet for the principles and standards of urban harmony of the heritage areas and buildings and those of distinguished value. Another booklet was issued about the general requirements for the safeguarding of the protection zones in Historic Cairo which contained this area. This booklet was also approved by the Supreme Council in 2011.

Herd immunity: Has the Egyptian regime chosen a nightmare strategy?