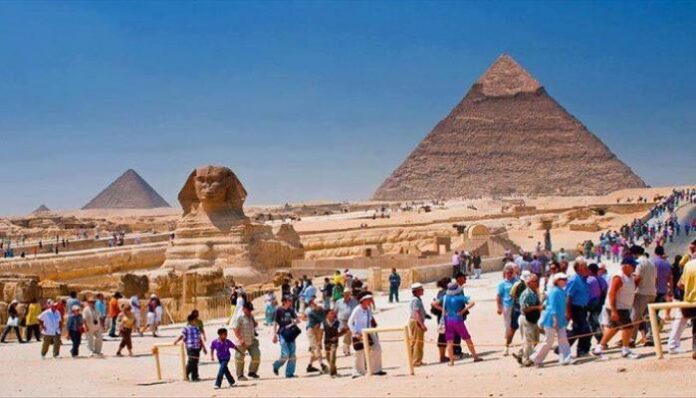 “The levels of tourism recovery in Egypt are lower than the competing countries,” revealed an international report assessing the tourism index and Covid-19, which measures the level of recovery compared to the natural rates of tourism, at a time when Cairo faces a moderate risk.

According to a report by Temple University, Egypt received a rating of 21 in terms of tourism recovery last July, compared to 92 before Covid-19 last February. The report emphasised that when comparing Egypt’s competitive position within this indicator, it becomes clear that the levels of tourism recovery in Egypt are lower than the competing tourist countries in the region.

Egypt potentially faces three high risks, which are the health and demographic system, the possibility of a collapse in remittances, and the strength of the banking sector. Egypt faces moderate risks in the economic vulnerability index due to Covid-19, the decline in tourism revenues, exposure to the exit of foreign capital inflows, and the financial space’s impact. Egypt faces moderate risks concerning the impact of global value chains, as well as commodity exports.

A report by the Oxford Business Group for economic consultancy, issued about a month ago, predicted that Egypt’s tourism would return to growth during the next year. The report added that it is expected new aviation routes linking the tourist resorts and archaeological areas in the country will be opened, to attract more leisure tourists. They spend about 86 per cent of the total visitor spending. In Egypt, tourism was severely affected by the decision to close airports during the period from March to last June.

Central Bank data showed that Egypt’s revenues from tourism achieved the lowest level during the last two years, in the first quarter of 2020. According to a statement from the Central Bank on the performance of the balance of payments, tourism revenues recorded during the first quarter of 2020, about $2.3 billion compared to $2.6 billion in the same period in 2019, a decrease of 11.4 per cent.

The Holding Company for Tourism and Hotels’ net profit retreated by 56 per cent to record about EGP 350 million ($22.2 million). Egypt has received more than 126,000 tourists since the return of foreign tourism at the beginning of July and until last week. Still, the sector’s future is uncertain, with some companies cancelling scheduled trips to the country. For example, the German company TUI Tourism announced the cancellation of all charter flights scheduled to operate to Egypt on or before September 13. The Russian government also confirmed that it has no intention of resuming flights to Egypt, making tourism in Egypt suffer, as large numbers of Russian tourists previously went to Egypt.

Waheed Assem, a member of the Egyptian Federation of Tourist Chambers, admitted to cancelling tourist reservations in hotels from Ukraine and Belarus, due to the high cost of PCR tests. He pointed out that the two markets that currently export tourism to Egypt are Ukraine and Belarus, and each of them pays amounts ranging from $150 to $190 on their visit for a week. Therefore, tourists cannot afford to pay the exorbitant cost of PCR tests, which reach $200.

The last IMF report expected that Egypt’s losses from tourism revenues would exceed two per cent of GDP this year, due to travel restrictions imposed by countries to confront corona. This prediction was based on a study conducted by the World Tourism Organisation, which assumes that all travel restrictions will be gradually lifted starting next September. Even with easing restrictions, tourism sector revenues will decrease by 73 per cent this year, from the levels achieved in 2019. The report expects that the pandemic’s tourism losses will be concentrated among the major tourism exporters, led by Egypt.

For his part, the tourist expert and member of the Chamber of Tourism Companies, Hany Peter, expressed his fear of the European Union’s decision to prevent tourists from travelling to Egypt in the coming period. He added, “Tourists coming from Ukraine, Belgium, Switzerland and Belarus have not yet covered about 20 per cent of the capacity permitted in hotels operating in Sharm el-Sheikh, Hurghada, and Marsa Alam.” He pointed out that 80 per cent of hotel occupancy is internal tourism, which confirms that the inbound movement is not economical. He pointed out that tourism will not recover until the return of German, Russian, and English tourism, as they are the most important export markets for tourism to Egypt.

Peter added that the tourism sector is still suffering from a severe financial crisis, noting that some foreign tourism companies have begun to ask Egyptian hotels to return reservations for groups that were supposed to visit Egyptian tourist cities during the Spring festival last March.

Egypt is losing its role in the Muslim world

Egypt pays the price of al-Sisi’s weakness in handling the Renaissance...