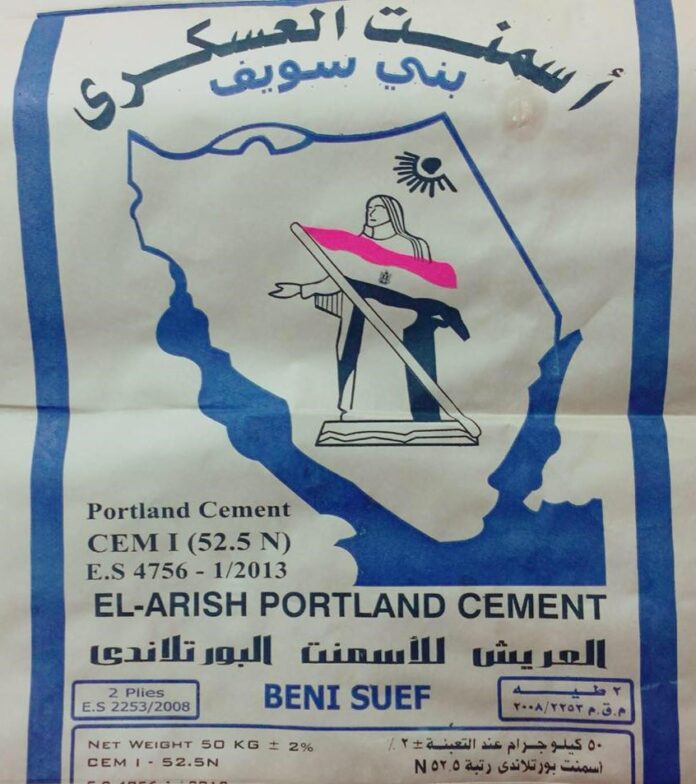 Solomon Baumgartner Aviles, CEO of Lafarge Egypt for cement, said that it is expected that five or six of the sector’s companies will drop out by next year. He attributed this to the decreased demand and the overflow of supply because of what he called the state’s new factories that further deepened the surplus production of the market, referring to the cement plant complex constructed by the Armed forces in Beni Suef.

During the online press conference he held on Tuesday 15 September, Aviles added that the cement sector is on the brink of ruin as the sector’s companies have been reeling for years under the increased production costs in the presence of large surplus production which forced them to lower their prices in an attempt to remain in the market. He called on the state to move quickly and make urgent decisions before the companies close down to escape further losses.

In August 2018, the Agency of National Service Projects, affiliated to the Egyptian Armed Forces, opened the National Cement Company. It is a huge company located in Beni Suef Governorate over an area of about five million m2. The company includes a cement plant complex that contains six production lines working with a production capacity of about 6,000 tonnes daily with a total of 12 million tonnes of cement production annually. According to Aviles, these amounts constitute 28.5 per cent of Egyptian demand for cement for the current year, which he said would range from 42-43 million tonnes this year with a 15 per cent decrease compared to last year.

Add to that el-Arish Cement Company, which belongs also to the Agency of National Service Projects of the Ministry of Defence located in North Sinai with a production capacity of 3.2 million tonnes annually, and the army’s share of the cement industry this year will have amounted to more than 36 per cent of Egyptian demand for cement.

The military involvement in the Egyptian economy is one of the biggest obstacles to its growth because the army enjoys many advantages that make it almost impossible to compete against it. Besides its virtually free workforce, as the vast majority of the workers in the army’s projects are conscripts, the military’s commercial branches possess the biggest percentage of the Egyptian construction sector via the Armed Forces Engineering Authority, the Agency of National Service Projects, and the construction companies belonging to the army’s branches which are affiliated to the General Intelligence service and the Ministry of Military Production.

The military business robs the general budget of billions of pounds in customs and taxes because all these huge projects are exempt from all fees and taxes under many laws like article 47 of Law No. 91 of 2005 that stipulates that “An annual tax shall be levied on the net aggregate profits of legal persons whatever their objectives. The tax shall apply to legal persons residing in Egypt, with respect to all profits whether realised in Egypt or abroad, with exception of the Agency of National Service Projects of the Ministry of Defence.”

All these projects are also exempted from sales tax under Article 29 of Law No. 11 of 1991 which stipulates that “All taxable commodities, equipment, machinery and services necessary for armament purposes of defence and national security, as well as raw materials, production prerequisites and components thereof, shall be exempted, as well as all commanders, agencies, administrations, and services of the Armed Forces and the funds of the Ministry of Defence or annexed to it.” Thus, this article includes the companies, units, and agencies affiliated to the Ministry of Military Production and the Arab Organisation for Industrialisation.

In addition to that, all the companies and agencies of the Ministries of Defence and Military Production are exempted from customs under Article 1 of law 186 of 1986 regulating customs exemptions, which stipulated that “Everything imported by the Ministry of Defence and the companies, units, and agencies of the Ministry of Military Production for the purposes of armament including weapons, ammunition, equipment, transportation, materials, tools, machines, tasks, medical devices, and pharmaceutics, as well as what is imported by the governments and foreign institutions for the performance of contracts entered into with the Ministry of Defence for the purposes of armament shall be exempted from customs taxes.”

For the communications received by the Ministry of Defence, proof of them must be provided by the Head of the Armed Forces Arming Authority. For those coming from the agencies, companies, and units affiliated to the Ministry of Military Production, proof must be provided by the Chairman of the board of Directors of the National Authority of Military Production or the Vice Chairman and the Managing Director, effective from August 2014.

The decision to suspend issuing all construction licences in Greater Cairo, Alexandria, the governorates’ capitals, and major cities for six months, from which the works of the companies affiliated to the army under the name “national projects” were excluded, further deepened the cement industry crisis in Egypt.

Recently, Egypt saw several companies in the cement industry, including National Cement Company, Tourah Portland Cement Co, and Al Nahda Cement Factory, shut down and their workers displaced. Hence, the state revenues lost the multiple taxes generated by these companies, unemployment increased by displacing their workers, and they were replaced by the army’s companies which harness soldiers, are exempt from customs and taxes, by no means are subjected to any kind of oversight, and whose profits are not included in the general budget.

Disputes and controversy in parliament over Sovereign Sukuk Law