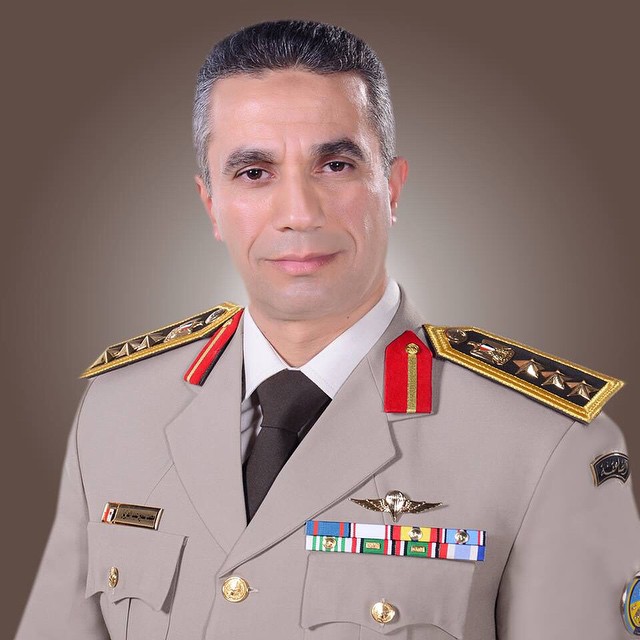 The former military spokesman for the armed forces, Brigadier General Mohamed Samir, did not expect that when he was writing an article criticising the political situation in Egypt, his words would drag him into woes at a time when no one is allowed to express his opinion, criticise a situation, or even warn of the danger the country is facing. The article written by Mohamed Samir was removed from the Vetogate news website after its publication. Still, the article astonished observers, especially since the criticism came from one of the army leaders, which has controlled Egypt since the military coup.

Despite the omission of the article, Do not assassinate Hope, lawyer Samir Sabri, who is close to the security services, submitted a complaint to the public prosecutor, accusing the former military spokesman of spreading false news and inciting violence. According to Sabri’s claim in his report, Muhammad Samir committed the crime of allegedly spreading false news and destabilising the country. He demanded Samir be referred to an urgent criminal trial. The interest of local newspapers and websites in Sabri’s complaint against Samir raises questions about the fate awaiting the former military spokesman, especially in light of the regime’s violent dealings with the opposition officers.

Abdel Fattah al-Sisi was keen to immediately eliminate any opposition against him within the army or even from former army officers who intended to run against him in the last presidential elections. Many army officers in military prisons are spending their sentences after prison sentences were issued against them by military courts, most notably Brigadier General Ahmed Qansoua, after he announced his candidacy against al-Sisi in the elections.

The question remains about the possibility of the former military spokesman joining these arrested officers, after the report submitted by the lawyer close to the security and intelligence services, whose reports lead to the imprisonment and trial of many. Mohamed Samir, in his article mentioned above, criticised the method of selecting candidates for the next parliament, considering it a repetition of the manner for selecting candidates who lack the minimum level of professional competence. He explained that the selection of candidates unknown to the public in the last senate elections, weeks ago, caused a widespread reluctance of voters to participate. The former military spokesman launched an attack on political parties for choosing the language of political money to recommend candidates to run in the next parliament elections.

Activists circulated pictures of checks indicating that candidates and business people paid about EGP 20 million to run on the lists of the National Future Party of the Egyptian General Intelligence. The announcement of the names of the national list led by the Nation’s Future Party sparked widespread anger among parliamentarians and businesspeople who were excluded from the list. It is noteworthy that the senate elections that took place weeks ago witnessed a vast turnout and boycott of voters, and the National Elections Authority announced that 54 million people had abstained from voting in elections in which only 8 million of the 63 million participated.

The list of imprisoned army officers is long. The most prominent is the former army chief of staff Sami Anan, who was arrested immediately after announcing his candidacy for the last presidential elections and was sentenced to 10 years imprisonment. Anan faced charges before a military court related to fraud and abuse of the armed forces just because he was considering running against al-Sisi before he was released recently due to his poor health. The same thing was repeated with Brigadier General Ahmed Qanswa. He announced his candidacy for the presidency in the face of al-Sisi, only to find himself imprisoned and sentenced to prison for six years.

Another former officer who announced his candidacy against al-Sisi in the last elections is Lieutenant General Ahmed Shafik. He was deported from the UAE to Egypt and placed under house arrest. The announcement of more than one officer of their candidacy against al-Sisi prompted him to issue a law last July through parliament stating that it is not permissible for officers to run, whether in service or those whose service in the armed forces has ended. Current or former officers are prohibited from running in the presidential, representative, or local council elections, except after the approval of the Supreme Council of the Armed Forces.

The legislative amendment closed the door to retired army officers in particular, as the law used to allow any soldier to run in any general election, provided he leaves the service. In August 2015, 26 military officers of different ranks were sentenced to prison after they were convicted of plotting a coup, divulging military secrets, and joining the Muslim Brotherhood. Last March, several detained officers began an open-ended hunger strike inside prisons, protesting the military leadership’s disregard for their and their families’ conditions after submitting a request for a pardon to the Minister of Defence.