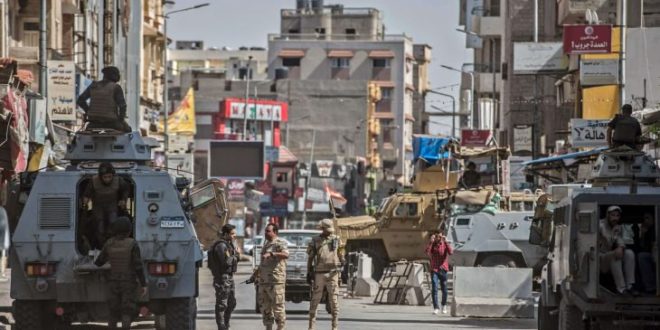 Military sources announced that an officer and three soldiers were killed in an armed attack in Sinai, in northeastern Egypt. The death toll included Mohamed Salah Riyad, a lieutenant colonel in the Egyptian army, and three conscripts. On Tuesday, two Egyptian soldiers were killed and three others were wounded in an armed attack south of Rafah city by the Sinai Province organisation, the local branch of the Islamic State in Egypt. Egyptian military medical sources said that the organisation’s fighters attacked the army’s military campaign south of Rafah in North Sinai Governorate (northeast), which led to human and material losses among the Egyptian military.

We Record human rights organisation documented that the number of women killed in the Bir al-Abed Centre in North Sinai has reached eight in less than four days. The organisation said that the dead were killed due to the Egyptian army allowing civilians to return to their homes without clearing villages of the explosive devices that ISIS previously planted. On Tuesday, four women, including children and civilians, were killed in the village of Agateh as a result of an explosive device. They were Sumaya Anwar Eid (two years), Lamia Eid Harb (17 years), Wafa Salim Muhammad (28 years), and Fatima Nasr Abd al-Latif al-Maslamani (25 years old). On October 10, the two women, Mona Amer and Mona Hamid Abdel Razek, were killed when an explosive device exploded when they returned to their homes after being displaced from the village of Qatiya. On the same day, Mrs. Warda and her daughter, Heba Mahmoud Abu Salim, were killed by an explosive device in the village of al-Janayen.

The organisation also documented the killing of Kamal Muhammad Salama due to the explosion of a mine planted by ISIS before its withdrawal from the village of al-Marih in the Bir al-Abed district in North Sinai. This brings the number of civilians killed since the army allowed them to return to their homes to nine civilians, including two girls.

Rights advocates have demanded that the Egyptian Ministry of Defence exercise its responsibility in clearing villages of remnants of improvised explosive devices and remnants of air strikes to prevent further civilian casualties. Since February 2018, a joint army and police force have launched an expanded military operation under the name Operation Sinai 2018.