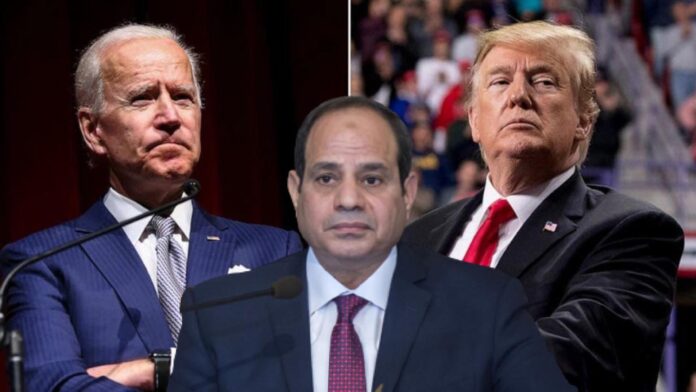 The Egyptian regime is concerned about the possibility of Democratic candidate Joe Biden winning the US elections, at a time when it hopes President Donald Trump will win a second term.

A research paper by the National Security Research Institute of Tel Aviv University entitled, “Egypt does not wait for Biden,” says that the American elections, scheduled for November 3, “cause concern to the Egyptian regime.” It added that the essence of the Egyptian concern relates to the foreign policy that Biden will follow if he wins, pointing out that the latter indicated that he intends to intervene forcefully in issues of democracy and human rights in Egypt. Biden is likely to appoint in important positions within his administration officials who have views sympathetic to the “Muslim Brotherhood,” according to the same source.

The Israeli Research Institute added: “Despite its preference for Donald Trump, Cairo refrained from taking any position that might be interpreted as support for any of the candidates based on its understanding that the two countries have interests in reducing tensions and maintaining sound bilateral relations even if Biden wins.” In the research paper prepared by researchers Zvi Lev and Ophir Winter, the institute said that if Biden wins, Egypt can exert regional pressure on Washington, using Saudi Arabia and the UAE, to discourage it from strengthening political Islam and Iran, and not to repeat what it called “the mistakes of former President Barack Obama.”

It can also show Egypt’s importance as a major player in the Middle East and the threat of further rapprochement with the rival powers of the United States, such as Russia and China, according to the same source. The institute said, “The situation of Israel will worsen if there is a great divergence between Egypt and the United States.” And he continued, “Israel has an interest in continuing the long-term strategic relations between Cairo and Washington.” She added that, if necessary, Israel could “urge Washington to ensure that its efforts to promote democracy and human rights in Egypt do not lead to the strengthening of the Muslim Brotherhood.”

The research paper considered that a possible divergence between Cairo and Washington could constitute an “opportunity” for Tel Aviv. She explained: “Tense relations with the United States may push Egypt to go to Israel and seek assistance from it, based on the understanding that the road to Washington passes through Israel, just as it happened during the Obama administration.” At that time, Israel and the Israeli lobby in Washington worked in favour of Cairo, but this scenario depends on Israel having sufficient influence over Biden’s administration.

Media journalist Ahmed Moussa, who is close to the authorities, said in an article in the government newspaper Al-Ahram, that “Trump’s continuation as president for a second period will be a happy thing, given the distinguished and strategic relations between the two countries in that prosperous period, as the country of 7,000 years, everyone looks at it with interest and appreciation.” He added: “In Egypt, there are concerns among some if Biden comes to power, which means the implementation of the Obama administration’s plan, and at that time Biden was a part of it, as he is the vice president and is involved in the developments and chaos that occurred in Egypt and the Arab world from supporting the Brotherhood to seize control.” But he indicated, “We are not concerned about Biden assuming the presidency of the United States, because we are not a weak or trembling country.” He added, “Egypt possesses its power and is working to fulfill the demands and needs of its people so that we can reach self-sufficiency. We can deal with Biden if the Americans elect him.”

It is noteworthy that the Wall Street Journal reported last year that Trump described his Egyptian counterpart Abdel Fattah al-Sisi as his “favourite dictator” while waiting for a meeting with him on the sidelines of the recent G7 summit in France. Trump always praises al-Sisi, noting that they began talking to each other shortly after Trump won the 2016 presidential election. The American president has previously said: “We understood each other well. He is a very solid man. He is nevertheless a good man, and he did a wonderful job in Egypt, which is not easy.”

Al-Sisi has faced widespread criticism for his authoritarian rule since he took power in 2013 when the Egyptian authorities were accused of detaining thousands of political opponents, torturing and killing prisoners, and frustrating political opposition. However, Trump rejects these accusations. The White House has not reprimanded the Egyptian regime (in public at least) for its human rights record, while Egypt has defended its policies, saying it is fighting extremists.