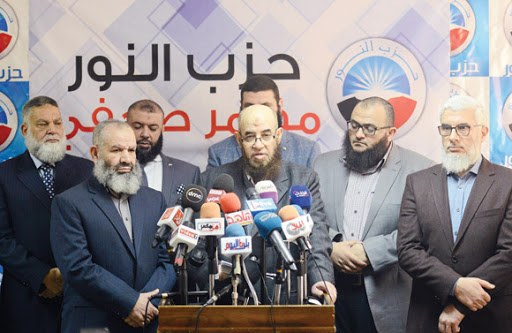 A primary goal that General Abdel Fattah al-Sisi achieved by appointing two members of the Salafi Nour Party into the senate was to try to show the regime that it was not hostile to Islamists in general. Ashraf Thabet and Mahmoud Turki, two members of the Salafi Nour Party, were sworn in on October 18 at the senate’s opening session. Al-Sisi had appointed them as representatives of the Nour Party in the senate. As the youngest member, Turki helped Lieutenant General Jalal al-Haridi, the eldest, in running the inaugural session.

During a statement issued on October 17, the Nour Party thanked al-Sisi for appointing two of its members to the senate, out of the 100 members appointed by the president in the 300-member senate. The presidential decision to appoint the two members came after all of the party’s 16 candidates failed to obtain any votes in the senate elections in August.

In 2012, the Nour Party came second in the Shura Council, which is now the senate, after the Freedom and Justice Party, the Muslim Brotherhood’s political arm, and won 45 out of 270 seats during the assembly elections. This situation comes to the only Islamic party currently in the country. It supported al-Sisi’s coup when he was defence minister in 2013, against the first elected civilian president, Mohamed Morsi, who is affiliated with the Brotherhood. At that time, the party justified its position against the Brotherhood by “injecting the blood of the Egyptian people,” according to what party leader Jalal once said, in his speech in a statement dismissing Morsi.

Despite the shedding of blood in Rabaa and al-Nahda, al-Nour Party defended Al-Sisi, saying that the latter was “innocent of the Rabaa protesters’ blood,” blaming the MB’s leaders for the bloodshed, saying that they called for a clash with the state. The party also supported al-Sisi in the presidential elections and justified its position by saying: “The Field Marshal is the most capable of running the country.” On the other hand, al-Sisi saluted the Nour Party and its stances, and said in a televised interview during his candidacy for the presidency in 2014: “The leaders of the Nour Party love the country, and are aware of the dangers surrounding the homeland, and it will enrich political life and advance democracy in Egypt.”

Returning to the elections, the Nour Party’s failure in the senate elections did not prevent it from running in the House of Representatives elections, as about 12 party candidates competed for individual seats. The party did not join any electoral lists or electoral alliances with other parties, while it holds 12 seats in the current parliament. In 2012, the Nour Party won 96 of the 498 seats in parliament, ranking second in the Egyptian parliament after the Brotherhood’s Freedom and Justice Party. The Nour Party, the political wing of the Salafist Call, was established in June 2011, following the January 25 revolution and the fall of President Hosni Mubarak. It is considered one of the first Salafist parties in Egypt that participated in political life.

According to statements quoted by al-Monitor, from specialists in political Islam, the state avoids disputes with the currents of political Islam, especially in light of the tension between the ruling regime and the Muslim Brotherhood, and thus is keen to consolidate its relationship with the Nour Party. “The Nour Party has supported all the ruling regime’s positions since the overthrow of President Mohamed Morsi, despite the regime’s opposition to its former ally, the Muslim Brotherhood,” said Maher Farghali, head of the Zat Masr Centre, which focuses on Islamic groups. He pointed out that the party declared its rejection of the demonstrations against the state and said that its claimants “are implementing foreign plans and methods of violence, chaos, and sabotage.”

In January 2018, the Nour Party announced its support for al-Sisi’s candidacy for a second term and held public conferences to support this candidacy. Farghali stressed that the next parliament will include the Nour Party representatives. Even if the latter fails in the parliamentary elections, this will be a confirmation that the state does not exclude the Islamic currents by appointing al-Sisi to their representatives. Likewise, political science researcher Ammar Ali Hassan explained, “The military establishment used the Nour Party as a front for the Islamist movement when al-Sisi announced Morsi’s removal.” He added, “The goal (of this rapprochement) was to confront the Brotherhood’s alliance against the army.”