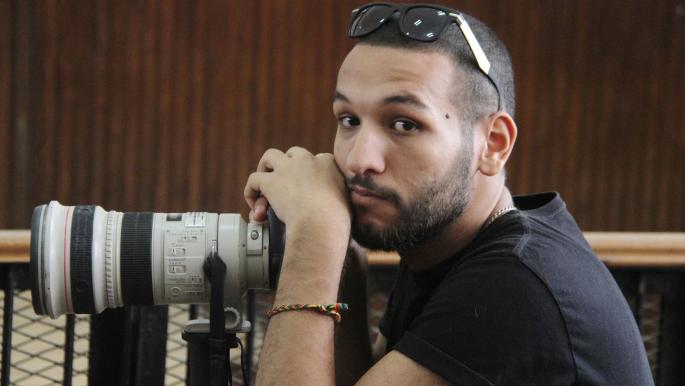 Just wandering around with a camera in the streets of Egypt or stopping to photograph squares and public places may make you a suspect and get you a trial in a politicised case that ends in the country’s prisons and detention centres. Dozens of accounts and testimonies from activists and tourists describe them being arrested and questioned by the Egyptian police and accused of carrying a camera and filming in the streets.

Since the military coup in Egypt in 2013, harassment and arrest campaigns have escalated against Egyptian journalists and foreign correspondents. The camera has clearly become an obsession and a terror for the regime. The latest case of the camera chase in Egypt was when the photojournalist Muhammad al-Ra’i was summoned by the National Security Agency of the Ministry of Interior and then forcibly disappeared in mysterious circumstances.

Under the hashtag, “Where is Muhammad al-Ra’i,” dozens of journalists, activists, and human rights lawyers called on the authorities to search for him and reveal his fate. Al-Ra’i went for interrogation at the National Security headquarters in Shubra al-Khaimah informally. He was interrogated for five hours and questions revolved around the nature of his work and the places in which he worked before he was released. The photojournalist was called for interrogation again, then his family and friends lost contact with him, and no one knows his whereabouts at this point. Al-Ra’i, an Egyptian photojournalist, works for several Egyptian and international news websites, some of which are opposed to the current Egyptian regime.

Fear of the camera

Photojournalists describe their work in Egypt with troubles that you may not get out of easily. You are a criminal in the eyes of the police until proven otherwise. Many of them explain that there is no photographer in Egypt currently who dares to raise the camera to photograph in the street, as this may expose him to arrest and confiscation of the camera.

According to a photographer’s testimony, he was detained in a police station for a day despite having evidence he was employed. He was subjected to interrogation and had to delete his video clips. According to human rights organisations, roughly 90 journalists are detained in Egypt.

The Freedom Committee of the Syndicate of Journalists says that the number of journalists arrested is about 25. Still, the government always denies imprisoning journalists and says they are imprisoned in criminal cases. Activists believe that the lack of transparency in society, restrictions, and the absence of democracy is behind the regime’s fear of the camera. The ruling regime’s fears were evidenced by the issuance of a law stipulating the necessity to obtain permission or written permission from the Interior Ministry before undertaking any filming in public places, which is mentioned in the law regulating the press and media.

The camera crisis in Egypt is currently no longer related to journalistic work. Tourists are also not spared from prosecution, arrests, and difficult filming conditions on the street. The persecution of tourists has repeatedly pushed foreign pages specialised in tourism on social media to warn against photography in the street and public places when visiting Egypt.

According to human rights activists, the camera has turned into a horror machine for the security authorities, for fear of conveying the reality of the situation or preparing any film material or programmes that would criticise the regime. If the photographer is Egyptian, it is easy to arrest him on known charges such as spreading false news, disturbing social peace, and insulting state institutions. If the photographer has a foreign nationality and is photographing without the required permission, then he is seen as a spy until proven otherwise.

The Assistant Secretary-General of the Journalists Syndicate, Amr Badr, revealed a crisis between the syndicate and the Ministry of Interior due to the Interior Ministry’s requirement to obtain a special security permit for field coverage and filming in the streets. Security sources clarify in press statements that the Ministry of Interior will not allow any video field investigation that shows any negativity in the country, even if the investigation follows websites or newspapers and channels affiliated with the regime. Egyptian and foreign correspondents said in statements that the Egyptian authorities were disturbed by the coverage of human rights violations by foreign newspapers and magazines and the attack on General Abdel Fattah al-Sisi.

Mahmoud Abu Zeid Shawkan was released with precautionary measures after nearly five years spent in jail in connection with the issue of the dispersal of the Rab’a sit-in. Police arrested Shawkan while filming the bloody dispersal of the peaceful sit-in by supporters of the late President Mohamed Morsi in August 2013. After a period of arrest, the authorities released the famous photographer, Muhammad Ibrahim, owner of the Oxygen blog, which reflects the street’s opinion about the existing conditions. Photographer Shadi Abu Zaid spent more than two years in pretrial detention until he was released a few days ago, and he is known for his satirical videos in which he interacts with citizens on the street.

In the absence of a vision for repayment, Egypt awaits new...