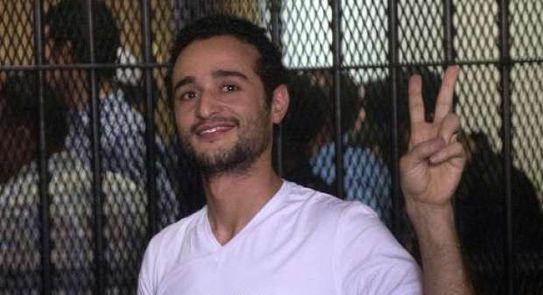 Eman added on Facebook that she visited her brother on Monday in Tora Prison and he was careful to distance from her due to a persistent cough. He told her that he suffers chest pain and exertional tachypnea.

Douma told his sister that he attempts to isolate himself from his cell mate, and that he wears a face mask all the time. He added that he had a chest X-ray in the prison’s hospital, but he did not inspect it and the doctor just told him that it was free. However, the prison’s administration gave him medications for the treatment of COVID-19 “as a precautionary measure,” according to the prison officials.

Eman renewed the demand that her brother be released. He is serving a 15-year prison sentence for participation in the protests before the cabinet headquarters in 2012. Douma has already finished half of his sentence. Over the past year, the Interior Ministry frequently denied that there were any COVID-19 infections in prison. However, news about cases of infections and deaths have surfaced over and over again.

Director of the Egyptian Initiative for Personal Rights held in solitary...

The minister of public business sector: 48 out of 120 state-owned...