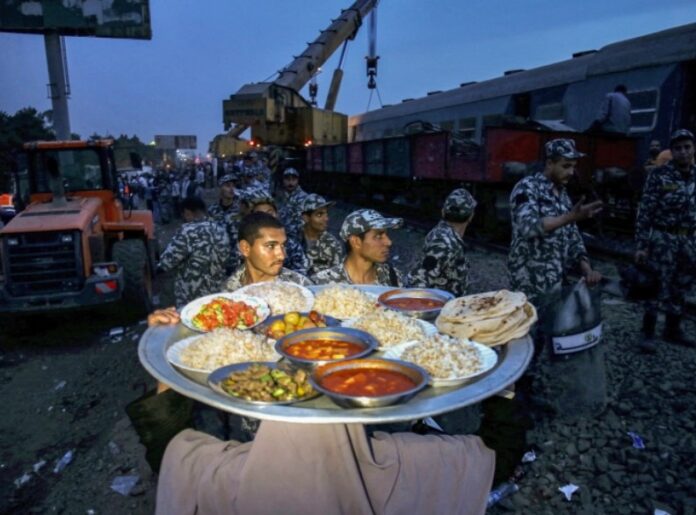 Activists on social media expressed their admiration and praise for the magnanimity of the people in Qalyubia Governorate, who showed solidarity with the victims of the Toukh train accident. State agencies intervened and supplied the injured and rescue workers with food.

The pictures showed the people of the city providing food to rescue workers, especially since the accident occurred during the day in Ramadan during fasting. Many pictures and videos captured the people of Kafr Al-Hessa village in Qalyubia Governorate distributing water and iftar meals to those present at the scene of the accident.

The people of the village and the neighbouring villages went out in large numbers before the sunset call to prayer, carrying water, juice and food. The residents continued to search for victims until iftar, in light of the absence and reluctance of officials who arrived at the scene of the accident late. Groups of families helped carry the injured and transport the bodies.

Residents organised a team to collect the belongings of the injured, including identity cards, using flashlights and cell phone searchlights, and handed them over to the authorities. Large numbers of citizens and youths went to Benha University Hospital to donate blood, help the injured, and inform their families of their whereabouts.

Simultaneously, many social media users expressed their anger over recurring train accidents and casualties. More than 16,000 tweets were posted on Twitter calling for the resignation of the Minister of Transport. At noon on Sunday, the accident occurred when a train heading from Cairo to Mansoura derailed in the Toukh area, causing some cars to overturn.

The accident resulted in the death of 16 people and the injury of more than 100 others. It is the fourth train accident in Egypt in less than a month.

Egypt’s PM: We have entered a phase of severe water poverty