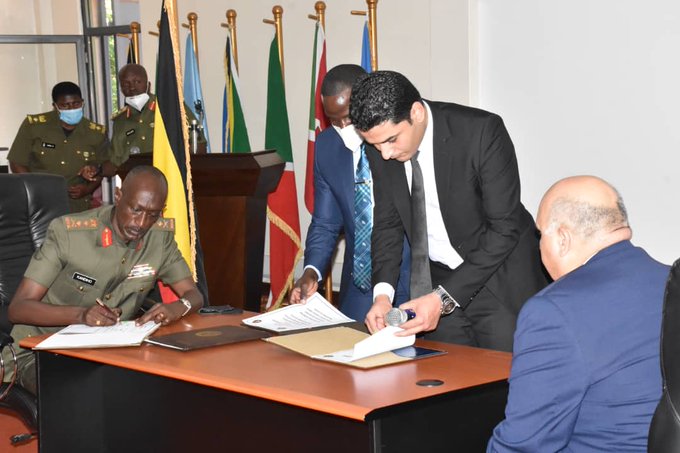 Both Uganda and Burundi announced, separately, that they had signed security agreements with Egypt to exchange information and military intelligence. This step represented an important development in the North and East Africa region that has become inflammable due to the continuing tension between Egypt, Sudan, and Ethiopia over the Grand Ethiopian Renaissance Dam (GERD) crisis. According to what was issued by the signatories of the two agreements, these countries “share the waters of the Nile, and cooperation between them is imperative,” in a move described as directed against Ethiopia.

There was no comment from Egypt on this cooperation. Cairo indicated that it preferred not to fuel the local media discourse towards the issue of the GERD, especially after Abdel Fattah Al-Sisi’s statements, which tried to calm public opinion and limit the demands to speed up a military resolution. These two agreements represent the latest steps in the rapprochement between Egypt and the Nile Basin countries during the last seven years.

The agreement with Uganda also comes after previous years of tension and unease. Ugandan President Yoweri Museveni led the joint efforts of the Nile source countries to conclude the framework agreement, which Egypt and Sudan opposed, and leads directly to depriving them of their historical shares of the Nile. Indeed, Uganda was the first country to sign and ratify the agreement, to become part of its domestic legislation, ahead of Ethiopia itself.

Uganda also opposed what it described during the late President Hosni Mubarak era, as Cairo’s attempts to control the sources through development projects. However, this tense relationship gradually changed during Al-Sisi’s era, specifically since his visit to Kampala at the end of 2016. He also participated in the Nile Summit in 2017 there, and then he hosted Museveni in May 2018.

According to observers, the Egyptian military and intelligence coordination with the upstream countries, especially South Sudan, aims to put Ethiopia under constant pressure and not necessarily threaten it too quickly with a military solution to resolve the issue of the GERD. Also, Egypt is betting on closer relations with upstream countries for other more strategically important reasons, such as working to amend the framework agreement to ensure a special status for Egypt and Sudan in joint decisions and shares.

Egypt and Sudan also want to ensure that they are informed before development projects are established on the Nile Basin. They also seek to stop the agreement’s implementation by fixing South Sudan’s stances and the Democratic Republic of the Congo. They have not yet signed it.

On the other hand, Egypt wants Museveni, who is known for his close ties with Ethiopia, to exert pressure and to ensure that the risks of constructing the dam on Egypt are minimised. It also aims to reach a binding agreement on filling and operating rules. These agreements also come in parallel with the declaration of southern Sudan, that it “will sign the framework agreement for the Nile Basin, and will ratify it as soon as the parliament convenes.”

This is a major development that Ethiopia was in dire need of to support its efforts against Egypt and Sudan to enter into force the framework agreement, to abolish the two downstream countries’ control of the lion’s share of the water flowing from the upstream countries. This declaration effectively annuls the previous agreements concluded in 1902, 1959 and 1993, and frees upstream countries from the restrictions that prevented them from building dams and reservoirs on a large scale. It will also be a prelude to forcing the two countries to enter a new allocation of Nile water, in parallel with reaching the Grand Renaissance Dam agreement.

Egypt and Sudan have always opposed signing it. Cairo specifically tries to use all kinds of means to persuade the concerned countries not to sign or ratify until all its clauses are comprehensively agreed upon and to amend the rejected items by Cairo and Khartoum. With an invitation to Egypt, its agreement with Uganda and Burundi culminates in a long process of cooperation agreements under which Egypt provides logistical and technical assistance to African countries. This aid, which has recently increased under the auspices of the General Intelligence, which oversees Egyptian support for the Nile Basin countries, includes training for police and criminal investigation personnel, judges, and doctors, combating some endemic diseases, generating electricity and energy, and aviation.

These moves result from the intelligence vision that the weakness of Egyptian-African relations during the Mubarak era, and then Cairo’s preoccupation with internal tensions between 2011 and 2014, was the main reason behind the bullying of Addis Ababa. Ethiopia extended its soft control over its surroundings, and then the construction of the Renaissance Dam.

The activities of the Nile water issue have increased tension during the past few days, after the failure of the Kinshasa tripartite meetings and Ethiopia’s rejection of all mediation proposals. According to Amr Adly, professor of political economy, this failure threatens the stability and security of Northeast Africa. It turns the Blue Nile Basin into a “cold war theater,” with the possibility of continuous hot war. Adly said that the failure to reach an agreement on the Renaissance Dam prompted Egypt to redirect its military attention to the south for the first time in decades. Adly commented that this is a situation that none of the three countries can afford, all of which are poor and densely populated, and yet it does not seem that they will soon reach an agreement.