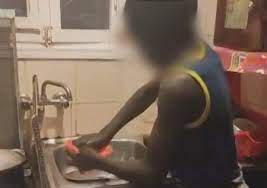 A TikTok clip circulating shows a teenage refugee from South Sudan in Egypt being verbally and physically assaulted and forced to work for free in an apartment in Cairo. The clip sparked widespread outrage on social media in Egypt and South Sudan.

Human rights activists denounced that shocking clip. The wide anger led the Embassy of the State of South Sudan in Cairo opening an investigation into the incident.

The embassy concluded that the video clip showed a teenager named Akok Kul, a 14-year-old asylum seeker, and his family who are registered with the United Nations refugee agency in Egypt. The incident was filmed in the Egyptian capital, and the boy was insulted, beaten, and forced to wash household dishes.

South Sudan’s ambassador to Egypt, Joseph Mum Majak, said on Twitter that he had taken measures to ensure the safety of Akok Kul and his family, explaining that the Egyptian authorities had arrested the perpetrators and detained them pending investigation. Concurrently, the Egyptian embassy in Juba issued a statement denouncing the unjustified behaviour in the video clip, saying that it did not represent Egyptian values.

Activists on social media in Egypt circulated shocking testimonies of the family of the teenager who was tortured. The teenager was burned on his genitals and raped.

The teenager’s father said that he and two of his daughters were kidnapped in a Cairo neighbourhood by a group of Egyptian youths, who took them to an apartment and took turns assaulting them and forcing them to wash household dishes. Akok’s family said in the investigations that his two sisters had been raped in addition to being beaten and verbally insulted and that the family was afraid to report the matter until the video clip surfaced.

Sudanese refugees in Egypt are subjected to horrific attacks and insults at the hands of the Egyptian authorities and some citizens. The attacks pass without investigation because victims are afraid to submit their statements and testimonies.