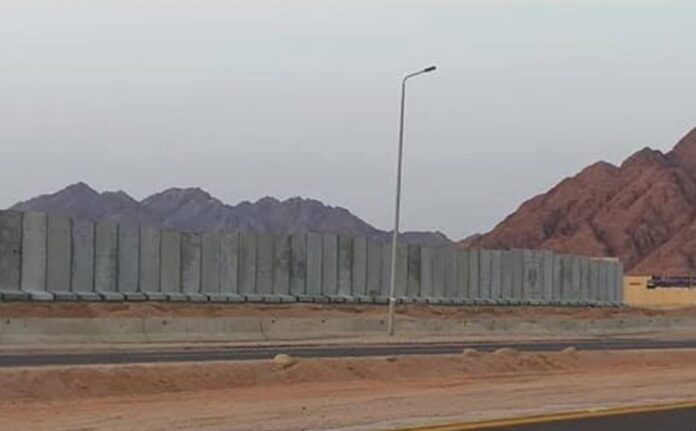 Reuters revealed that the Egyptian authorities are constructing a 36-km-long concrete wall around Sharm el-Sheikh in South Sinai in order to tighten security measures around the one of the most prominent tourist coastal resorts in Egypt. The wall isolates Sharm el-Sheikh as if the city belongs to another country, but this is not the only problem. Actually, the announcement of the wall reveals a lie Egypt’s government has used for two years.

In February 2019, pictures of construction work around Sharm el-Sheikh were published raising criticism against the regime. The wall was seen as a sort of apartheid barrier that isolates the poor of the city from the rich. Moreover, it prevents Bedouin population from entering the city, where they live and work. General Mahoud Al Souleia, the governor of Sharm el-Sheikh, replied that the fence will be just a mesh net to prevent the crossing of camels, sheep and goats, and to prevent air-borne plastics and papers from reaching Naama Bay, the main tourist hub in the city.

Al Souliea’s statements calmed down the concerns about the wall until December when General Khaled Fouaad, the governor of South Sinai and one of Sisi’s in-laws, said that the security measures in Sharm el-Sheikh will continue with this concrete wall. “President al-Sisi constructed a 36-km-long security wall around Sharm el-Sheikh with four security gates,” said Fouaad, who has assumed the government of South Sinai for 10 years until now, because he is al-Sisi’s relative.

Fouaad added during a meeting with a couple of travel and tourism agencies that the wall will have security gates to control the entrance and exit along with cameras, a security surveillance system and watch towers. In February, Fouaad confirmed his previous statements, explaining that the wall is necessary for Egyptian endeavors to develop Sinai and restore tourism after the Russian passenger plane bombing over Sinai in 2015.

This isolating wall raises questions about the causes of the blackout imposed on news about it and on why officials are lying about it. What are the benefits of such a wall? How much does it cost? This is not the first lie of al-Sisi’s regime, which has a long record of lies. Recently, PM Moustafa Madbouly said in his speech before the parliament in January that the poverty rate declined to 29.7 per cent in 2019/2020 compared to 32.8 per cent in 2018, and that this is the first recess over the past 20 years.

Professor Heba El Laithy, supervisor over the research of expenditure and consumption in the Central Agency for Public Mobilisation and Statistics, said that the number is not accurate as the research was suspended due to the COVID-19 pandemic, and that if the improvement was really right, it would be because of the increase in child labour because more people are dropping out of education.

Egypt nearly ‘bankrupt’ due to mishandling of public funds