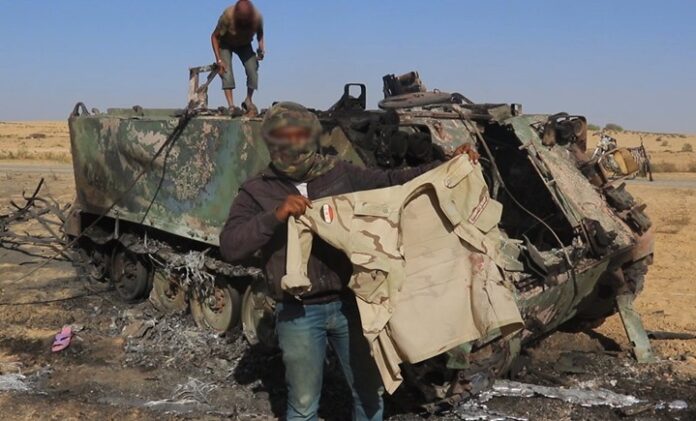 On Tuesday, two Egyptian rankers were killed by an attack launched by Wilayet Sinai, the local ISIS branch in Egypt, in Arish, North Sinai.

Sinai for Human Rights unveiled the extent of human rights violations in Sinai by the conflicting parties.

The organisations revealed that 112 civil citizens, including 25 children and 22 women, were killed over 2019 and 2020, and 143 others, including 36 children, were injured by both parties. The organisation recorded in its report that the Egyptian military repeatedly bombarded houses, health facilities and hospitals in its attacks on ISIS and forcibly displaced the inhabitants. The military’s indiscriminate shooting killed 26 civil citizens and injured 33 others, while air strikes killed 30 civil citizens and injured 22 others.

The report said that three statements made by the Egyptian authorities on the situation in Sinai was confirmed to be false news, which raises concerns over the credibility of the Egyptian authorities there. Moreover, the report recorded arbitrary arrests in Sinai including of women and children, quoting a woman that was detained for four months in a police station in Arish. “All women there are detained because each of them has a relative wanted by the security.”