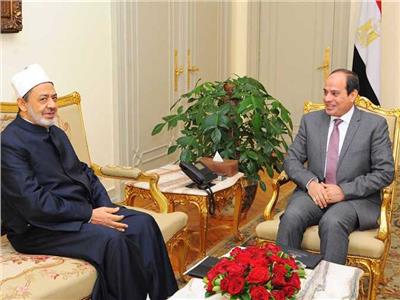 Egyptian sources have revealed that new disputes have broken out between the presidency and the sheikh of al-Azhar, regarding the names proposed for appointment to the senate as representatives of the religious establishment. The sources pointed out that the names close to the Sheikh of al-Azhar, Ahmad al-Tayyib, were excluded, as a new episode of the policy of intrigue between the regime and the religious establishment, which sparked the anger of the Sheikh of al-Azhar Ahmad al-Tayyib. The National Security police allocated only three personalities to be appointed as representatives of the religious establishment within the list of appointments of the President of the Republic, which is stipulated in the constitution, but finally, al-Azhar’s leader was excluded from choosing its representatives.

The media sources added that the security and sovereign services supervising the elections which will be held next week, have identified three names, among them the former Grand Mufti of the Republic, Ali Gomaa, the preacher Khaled al-Gendi, and the academic Abdullah al-Najjar. The senate consists of 300 members. Two-thirds of its members are elected, and General al-Sisi appoints the remaining third, with at least 10 per cent of his seats allocated to women, for a period of five years.

Observers say that there has been a hidden conflict for years between General Abdel Fattah al-Sisi and Sheikh al-Azhar Ahmad al-Tayyib, as al-Sisi is seeking to withdraw the powers granted to al-Tayyib, who is independent and cannot be dismissed, according to the constitution.

The Egyptian government refuses to extend reconciliation in building violations