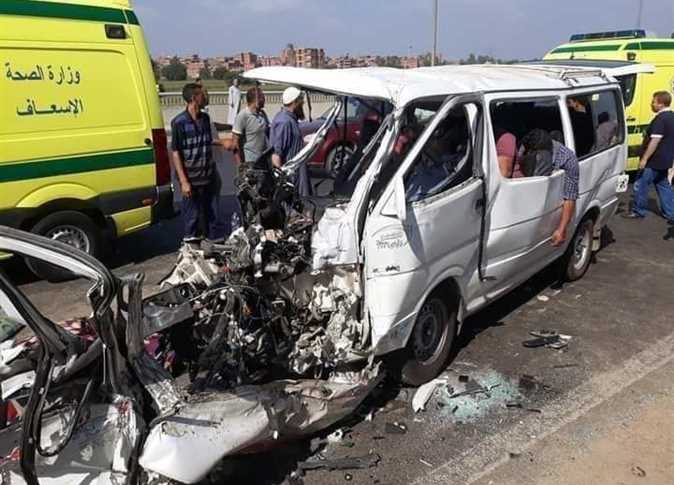 On Saturday morning, a microbus and a public transport bus collided on the international road in the city of El-Tor, south of Sinai, killing 16 people and injuring 18 others.

This comes two days after two people died and 45 others were injured in two accidents on Ain Sukhna Road, on Thursday. The first was due to the overturning of a minibus, injuring 45 people, while the second, which resulted in the death of two people, happened when a trailer without metal plates overturned. This comes three days after a traffic accident occurred on the Central Ring Road, near the Autostrad tunnel. It resulted in the crushing and burning of 11 cars, after two heavy transport vehicles, seven cars, and two microbuses collided. The accident resulted in the death of one of the drivers, and the injury of eight others, who were taken to hospitals for treatment.

The Egyptian Public Prosecution issued a statement in which it indicated that there are technical defects in the Central Ring Road that has caused the accidents. The road was implemented by the Engineering Authority of the Armed Forces in cooperation with the Ministry of Housing, Utilities and Urban Communities. In its statement, the Public Prosecution confirmed that the frequent occurrence of traffic accidents on the road is a result of blocking the angle of view in the curve at which the last accident occurred. It also called on the specialists to visit the site and find out the truth behind the frequent occurrence of traffic accidents, and to repair the defects in it, to preserve the safety of lives and property.

The Egyptian President, Abdel Fattah Al-Sisi, has visited more than once, during the past year, the Central Ring Road, which is 156 kilometres long, and connects the cities east and west of Cairo. In an official statement, Sisi described the road as the widest of road networks in the Middle East, accommodating tens of thousands of vehicles daily, and relieving traffic congestion around the areas of Greater Cairo. He added that it represents a major addition to the new road network system. Hardly a week passes without fatal accidents occurring on the road, due to the lack of a lane for heavy transport trailers, thus allowing the trailers to run at high speeds with private cars and taxis.

The total traffic accidents in Egypt amounted to 5,220 in the first half of 2019, compared to 4,426 accidents in the same period in 2018, an increase of 17.9 per cent, according to a report from the Central Agency for Public Mobilisation and Statistics. The number of deaths and injuries because of these accidents reached 7,613 people during the first half of 2019, with a monthly average of 1,269 people, which puts Egypt in the ranks of the top countries in the world, in terms of road accidents. According to the latest bulletin from the agency, road accidents during the past year resulted in the death of 6,164 people, and the injury of 56,789 others.

Aboul Fotouh’s family appeals to Sisi to release him