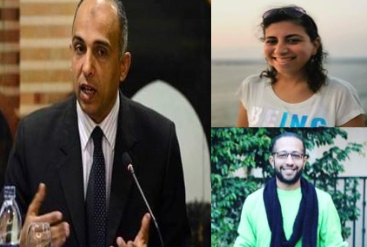 Two days ago, Dr Mohamed Mohieldin, a former parliamentarian and assistant professor at the Faculty of Engineering, Beni Suef University, wrote a post on his Facebook account, requesting a job opportunity in any university outside Egypt after his university dismissed him while he was in pre-trial detention because of a political case.

Dr Mohieldin was arrested in February 2019 due to his opposition political activity. He was charged with “participating in a terrorist group to achieve its goals, publishing and broadcasting false news aimed at destabilizing security, and preparing and planning acts of violence and sabotage.” He remained imprisoned without trial for more than three years. He was only released last June within the framework of the “national dialogue” understanding between the Egyptian regime and the opposition. After his release, Mohieldin was surprised when the President of Beni Suef University issued a decision to terminate his service because he had “stopped to work”, which is a flagrant legal violation, as the cessation of work was for a compelling cause known to all—issued no conviction against Dr Mohieldin. Despite his attempts to return to work by submitting applications to the university’s presidency, these attempts were unsuccessful, which prompted him to file a lawsuit to challenge the decision to terminate his service. The case is still pending before the courts. Muhyiddin’s case is not isolated, as there are hundreds of political detainees who were released from prisons only to find themselves without work or a source of livelihood, despite the pledge of the “Presidential Amnesty Committee”, which facilitates the release of political detainees within the framework of the dialogue initiative with the political opposition, to help the released detainees to return to their work or find job opportunities, but this remains on paper and has not been achieved yet.

A few days ago, researcher Kholoud Saeed Amer, head of the translation unit at the Publications Department at the Bibliotheca Alexandrina, who was detained because of a political case for more than two years, complained about the Bibliotheca’s refusal to reinstate her or to give her financial dues as stipulated in the law and regulations.

Accountant Haitham al-Banna, a member of the Supreme Committee of the Constitution Party, who spent several months in pre-trial detention, complains of his difficulty in finding a job: “I worked as an accountant in several private companies, and after my arrest and pre-trial detention, and then obtaining my release, I tried to find a suitable job, but I couldn’t find it. I applied to work in many companies, including companies owned by some of my relatives. Still, they are all afraid of the presence of a former political prisoner and the possible punishment, as my work may cause anger to some security apparatus or institutions.”

The government is deaf to the complaints of political detainees and even re-arrests those who raise their voices and complain too much, such as what happened with the political activist Sherif El-Rouby, who was re-arrested only four months after his release, as complained in a television interview he gave to Al-Jazeera channel from hardship and lack of job opportunities. “Any political prisoner – regardless of his affiliation or orientation – comes out in a terrible situation. If he is a business owner or owner of a company, his work stops because the state and the security services are fighting him. His friends and those close to him try to avoid him, so they do not face security problems. We suffer from many problems, including the hardness of life and the lack of work. I went to work in a bean and falafel popular restaurant, and when the employer learned about my identity, he refused to hire me.” This is an excerpt from al-Roubi’s speech, which was the reason for his re-arrest.

The Egyptian regime insists that the price of opposition to his rule will be heavy. He insists that there be a heavy price to be paid by everyone who dares to raise his voice, even for once. It wants to tell everyone that the punishment for dissent will not be limited to imprisonment only. Still, it will be an extended punishment that includes all aspects of life until it becomes a life suspension.

Biden’s victory: Will it strengthen the thorn of the opposition in...

The crime in Sisi’s Egypt is not being corrupt, it is...