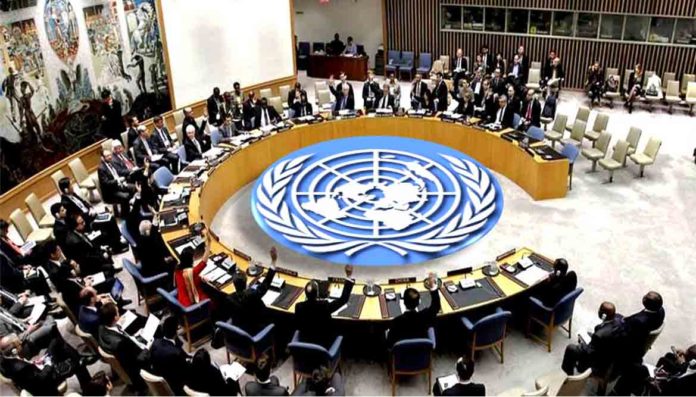 Last Wednesday, the United Nations Security Council issued a statement urging Egypt, Ethiopia and Sudan to resume negotiations on the Renaissance Dam, under the auspices of the African Union, with the aim of “putting forward a final formula for an acceptable and binding agreement for the parties, and urgently, regarding the filling and operation of the Renaissance Dam, within a reasonable time frame.”

The Security Council encouraged the observers invited to the African Union-led negotiations – and any other observers that Egypt, Ethiopia and Sudan may decide to invite, by consensus and jointly – to continue to support the negotiations, with a view to facilitating the resolution of outstanding technical and legal problems.

Egypt received the council’s statement with welcome and applause, as the Ministry of Foreign Affairs considered that “the issuance of this presidential statement by the Security Council confirms the special importance that members of the Security Council attach to the issue of the Renaissance Dam, and in recognition of the importance of containing its negative repercussions on international peace and security, and their responsibility to remedy any deterioration in the situation resulting from not paying due diligence to it.

The Egyptian Foreign Ministry stressed that “the statement issued by the Security Council on the Renaissance Dam, and in light of its mandatory nature, represents an important boost to the efforts made to make the African negotiating track a success, which requires Ethiopia to engage seriously and with a sincere political will in order to reach a binding legal agreement on the rules of engagement.”

To answer the question of whether or not Egypt has won, we must remember what Egypt requested from the UN Security Council in July when the council held a session to discuss the Renaissance Dam crisis, at the request of Cairo and Khartoum, after the failure of negotiations with Addis Ababa, sponsored by the African Union. Tunisia, the current Arab member of the Security Council, submitted a draft statement calling for a binding agreement between Ethiopia, Sudan and Egypt regarding the operation of the dam within six months, but the project was not accepted for discussion and remained suspended.

What did Egypt get? More than two months after the Security Council session, a statement was issued calling on the three countries to resume negotiations under the auspices of the African Union, meaning that the council washes its hands of the matter and returns it to the African Union’s court, which previously failed to resolve the crisis, which prompted Cairo and Khartoum to resort to the Security Council. The International Council did not set a time limit for reaching a binding agreement, and only called for an agreement to be reached “expeditiously” and “within a reasonable time frame.” These are flexible matters subject to views. The reasonable time frame for Egypt and Sudan is not necessarily the same acceptable and reasonable framework from Ethiopia.

Moreover, an informed diplomatic source revealed that the representatives of Russia and China in the Security Council “informed the delegations of Egypt, Sudan and Ethiopia that the file of the Renaissance Dam will not return to New York (that is, the United Nations) again, which means that the two countries will block any attempt to raise the issue again in the Security Council.”

The Security Council statement, then, is not considered a victory for Egypt, as it did not achieve what it demanded, but rather brought the matter back to square one, as the African Union is unable to impose any decisions to stop Ethiopian from procrastinating in resolving the crisis. Nevertheless, Egypt welcomed the statement, and tried to market it as a victory for its diplomacy, in an attempt to save face and avoid popular anger.

A new round of negotiations is expected

Several indications point to the imminence of a new round of negotiations on the Renaissance Dam. A few days ago, President Sisi received a phone call from President Felix Tshisekedi, President of the Democratic Republic of the Congo and current President of the African Union. Although the Egyptian presidential statement on the phone call did not mention that it addressed the issue of resuming the faltering negotiations, and only indicated that the two presidents talked about “the issues of bilateral cooperation between the two brotherly countries, and developments related to the most prominent African issues of common interest,” the leaks indicate that the two presidents discussed the resumption of negotiations.

A government source revealed that arrangements are underway regarding a meeting chaired by the Congo to be held in October between the parties to the crisis, but the details of the date, the agenda of the meeting and the level of representation are still under consultation, stressing that Cairo will insist in the next meeting under the umbrella of the African Union that an agreement be reached before the third filling of the dam reservoir, which is expected to be in the next rainy season in July and August 2022.

Will Al-Sisi’s debts limit Egypt’s options in the GERD crisis?