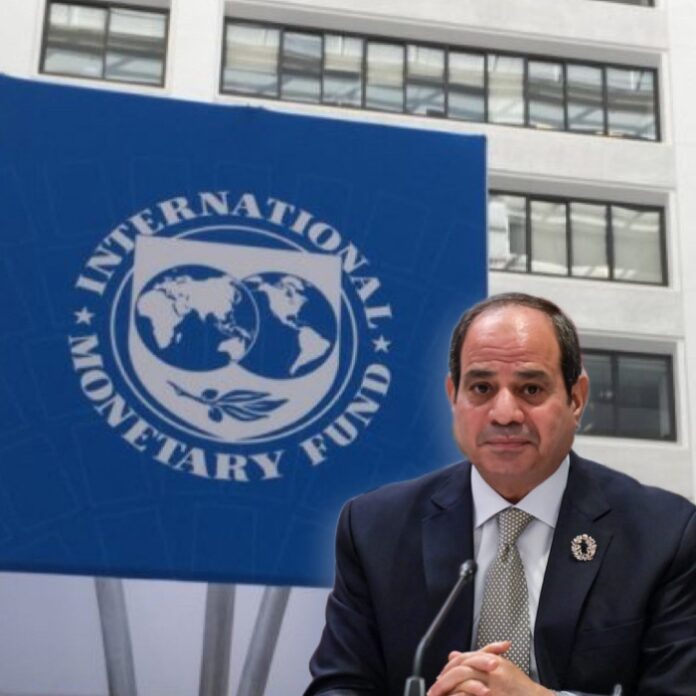 The International Monetary Fund declared its conditions for concluding a $3 billion loan to Egypt that was agreed on last December. The Egyptian government kept the requirements of the deal under cover, considering what they meant for the living conditions in Egypt and what they said about the governmental economic performance in Egypt over the past few years. According to the IMF experts report that was released in a press conference on Tuesday, Egypt accepted several conditions for redressing the Egyptian ongoing economic imbalances which preceded the Russian-Ukrainian war, according to the experts. The report assessed “Egypt’s debt to be sustainable but not with high probability, and overall risks of sovereign stress are high, with the interest burden taking up sizable budget space.” Therefore, the IMF agreed with the Egyptian government to reduce public spending, increase national production, and remodel monetary and fiscal policies.

Regarding spending reduction, the IMF demanded the Egyptian government adhere to fiscal consolidation and debt management to ensure a “downward trajectory in public debt-to-GDP and contain gross financing needs.” Indicating the previous imprudent governmental spending on megaprojects promoted by Sisi, the IMF hinted that the government must manage national investment projects consistent with external sustainability and economic stability. On the other hand, “increasing social spending and strengthening social safety net” was recommended by the IMF to protect the most vulnerable population. Here be noticed that slowing down spending on public projects, particularly non-greenback generating ones, was a primary demand of the Egyptian dissident parties. Still, Sisi refused and stated weeks ago, “We are not going to reduce spending on the national projects to alleviate pressing needs of a dollar.”

The IMF demanded that the government redress poverty and inequality through other health, education and social protection spending. The IMF conditions of increased social spending and slowing down capital-consuming national projects identify with the demands of the Egyptian dissidence that Sisi used to mock them.

Egypt will gather cash inflows of about $5 billion from its foreign partners to fill the financial gap before June 2023. According to the report, those inflows include a $1.1 billion loan from the World Bank, a $400 million loan from the Asian Infrastructure Investment Bank, $300 million from the African Development Bank, $300 million from the Arab Monetary Fund, and one billion dollars from China Development Bank. Aside from loans, $2 billion are supposed to enter the Egyptian treasury from the ongoing divestment of state-owned assets to the GCC partners, who have financed the Central Bank of Egypt with $28 billion in long-term deposits. Egypt is expected to divest $4.6 billion-worth assets over the upcoming year, then another $1.8 billion-worth assets in 2024/2025.

Regarding the state withdrawal from business, the IMF explained that the reform policies aim at reducing “the state footprint and increase the role of the private sector in the economy will focus on the gradual exit of the public sector from non-strategic sectors, levelling the playing field between state-owned enterprises (SOEs) and private companies, removing trade barriers.” The state exit from the business must be synergized by “strengthening the transparency and governance of existing SOEs.” The IMF provided all SOEs must “submit financial accounts to the Ministry of Finance on a biannual basis and provide information on any quasi-fiscal activities.” The Ministry of Finance has to make open access to the data. “Eliminating the preferential treatment of SOEs over private sector firms” was also conditioned by the IMF, which also suggested, “the Egyptian Competition Authority (ECA) will be empowered to act independently against anti-competitive practices.”

The Egyptian authorities will list state-owned enterprises on the Egyptian Stock Exchange Market and offer stakes in the Sovereign Fund of Egypt, which seeks to monetize state-owned assets. $2.5 billion are targeted in the first phase of pre-IPO stake sales by June 2023, and proceeds from sales of state-owned assets will be deposited in an earmarked account at the CBE to ensure oversight. According to the IMF press release, the Egyptian government approved, “The fuel price indexation mechanism will be fully implemented, with targeted compensation for the most vulnerable.” Another indexation mechanism for the domestic price of natural gas is introduced. The elimination of fuel subsidies and the move to flexible exchange rates raised domestic concerns over increasing inflation and hardening of living conditions considering the annual inflation hiked at 24.4%.

A student with COVID-19 dies after being forced to attend a...