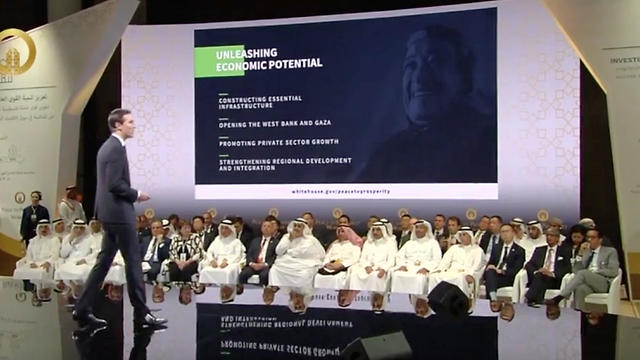 CAIRO — Egypt’s recent announcement that it will attend a US-arranged conference on the Palestinian economy next week in Manama, Bahrain, is causing consternation among Palestinians who fear Cairo will abandon their cause. President Abdel Fattah al-Sisi has stressed, however, that his country will not agree to any US plan the Palestinians reject.

The United States says the June 25-26 conference is designed to support the Palestinian economy within the framework of the US peace plan — despite the Palestinian Authority’s boycott of the meeting and rejection of the plan, which it says favors Israel.

US officials said Cairo, Jordan and Morocco informed the US administration June 11 that they will attend, though some media reported that Morocco denied the White House statement. Qatar, Saudi Arabia and the United Arab Emirates have said they will participate.

The same day as the White House announcement, the Palestinian government said it regretted that Cairo and Jordan had decided to participate and called on them to change their decisions.

Israel was not invited at all, and Russia, China and the United Nations are boycotting the conference. Still, there are reports that 300 to 400 representatives and executives from Europe, the Middle East and Asia are expected to attend.

Hassan Nafaa, a political science professor at Cairo University, told Al-Monitor by phone that by taking part in the conference, Egypt will be abandoning the Palestinian cause — the dream of a Palestinian state.

“Egyptian participation … means that Egypt is following in the footsteps of the US and bowing to Israel,” he added.

Nafaa believes the Palestinian cause requires not an economic solution, but a political one. He also said Egypt’s participation will prompt Israel to exert greater pressure on Palestinians, effectively subjecting them to US blackmail, and liquidating their cause.

However, Tarek Fahmi, head of the Israeli studies department at the National Center for Middle East Studies, told Al-Monitor by phone that the economic approach is a prelude to a political approach. The conference could serve as a platform for Egypt to offer economic incentives for the Palestinians by encouraging regional investment, working on global and technological exchange and establishing regional economic institutions.

He said that boycotting the meeting won’t solve the problem. If the US plan is rejected, he said, Palestinians will need to let their position be heard while suggesting alternative plans.

“Egypt hasn’t received from Washington any assurances related to [Palestinian] naturalization or land-exchange issues, but it won’t make any concessions in this regard,” he added, referring to reports that under the deal, Egypt would give up a chunk of the northern Sinai.

Rakha Hassan, a member of the Egyptian Council for Foreign Affairs, told Al-Monitor by phone that Cairo’s participation in the Manama conference is a major political setback.

In an effort to keep the deal from being rejected, “The US and Egypt agreed to cancel the naturalization and land-exchange clause stipulating that part of the northern Sinai would be given to the Palestinians,” he said.

He said that boiling down the Palestinian cause to an economic crisis deals a blow to its political goal, and said Egypt should have joined the international boycott of the conference, especially when the United States is increasing its attempts at imposing a fait accompli for Israel.

“When the US recognizes Jerusalem as the capital of Israel and cuts off the UNRWA funding, and then Egypt decides to attend this conference, this infers that Egypt is abandoning Palestine and weakening the Palestinian resistance,” Hassan said.

In April 2017, Sisi vowed to support US President Donald Trump’s effort to “find a solution to the problem of the century in the ‘deal of the century,’ ” as the plan was dubbed by the United States. Hassan pointed out that at that time, Sisi hadn’t consulted with Egyptian politicians and diplomats, weakening the Egyptian political approach and affecting the Egyptian national interest. The results, Hassan said, will be disastrous for Palestinians.

Mohamed Orabi, chairman of the Egyptian parliament’s Foreign Relations Committee, told Al-Monitor, “Egypt is participating in the conference to see what will happen, but this doesn’t mean Cairo supports the US approach.” Orabi, who previously served as Egyptian foreign minister, said Egypt will not accept foreign parties imposing plans on Palestinians.

Azzam al-Ahmad, a Fatah Central Committee member, said June 11 that Egypt and Jordan have special relations with the United States, and that Fatah can’t judge them for attending without knowing all the circumstances. He made it clear, however, that he hopes other Arab countries won’t participate.

Hazem Abu Shanab, a Cairo-based member of the Fatah Revolutionary Council, told Al-Monitor that his country opposes any Arab participation in this workshop and doesn’t understand why Arabs are taking part. In his opinion, participation in this conference infers support for both the extreme position of Israeli rulers against the Palestinians and Washington’s bias toward Israel at the expense of Palestinian rights.

Abu Shanab said Fatah is greatly concerned by the potential repercussions of Arab participation in the conference, and the movement rejects the workshop altogether.