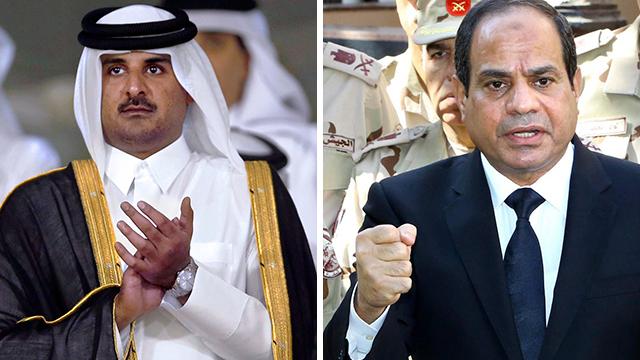 Egypt’s representative to the International Court of Justice (ICJ), Amjad Abdel Ghaffar, has accused Doha of “adopting a hostile stance towards Cairo.”

He pointed out that “Egypt’s decision to sever relations with Qatar came because of the insistence of the Qatari regime to continue its support for terrorist organisations, especially the Brotherhood.”

The attack is the latest sign of the failure of reconciliation efforts with Qatar, despite media reports in recent days on reconciliation.

The Egyptian representative at the ICJ accused Qatar of providing a safe haven for the Muslim Brotherhood, promoting the doctrine of Al-Qaeda and Islamic State and supporting terror operations in Sinai.

During a session at the ICJ, Abdel Ghaffar said: “Despite Egypt’s will to maintain friendly relations, especially with other Arab countries, the behaviour of the State of Qatar has left Egypt with no choice but to take measures related to [banning Qatari planes in Egyptian airspace] since 2017.”

He stressed that “this decision came as a result of Qatari interference in the internal affairs of Egypt and its support for terrorist groups in order to destabilise and kill their children.”

The Egyptian offensive is killing recent hopes of a possible reconciliation to end the crisis with Qatar.

Observers have said that the Gulf Cup launched in the Qatari capital Doha, along with Saudi, United Arab Emirates and Bahraini teams, along with several other indicators, were important milestones in the course of resolving the crisis, which began in June 2017.

According to the Saudi Arabian ambassador to Kuwait, Prince Sultan bin Saad Al Saud, as quoted by the Kuwaiti newspaper Al-Seyassah (politics): “Sports may repair what has been corrupted by politics and Kuwait seeks to [mediate], and we wish to complete what brothers in Kuwait [did], especially Deputy Foreign Minister Khalid al-Jarallah”

Earlier, al-Jarallah said that the participation of Saudi, Emirati and Bahraini teams in the 2019 Gulf Cup is an important indicator of progress towards resolving the crisis between brothers.

In the UAE, Abdul Khaliq Abdullah, a UAE academic and professor of political science who is close to the government, announced via Twitter that the imminent solution to the Gulf crisis may take place on November 12.

He tweeted: “There are important developments to resolving the Gulf dispute sooner than you expect.”

“There is another decision, to stop the media campaigns abuse,” he added.

On the US side, several media reports in Washington said that efforts to end the Gulf crisis are “at an advanced stage,” referring to efforts led by Washington, under direct orders from President Donald Trump, who according to these reports assigned the US ambassador to Riyadh, retired General John Abizaid, to achieve Gulf reconciliation.

Egypt, Saudi Arabia, the United Arab Emirates, and Bahrain have accused Qatar of supporting and financing terrorism, and have imposed a blockade on the country since June 5.

Doha denies all the accusations, saying there is no evidence and that this is a campaign launched in an attempt to change the political system and influence its internal decisions.

A cell for every citizen: 8 new prisons built in Egypt