EgyptWatch
Home Reports In al-Sisi’s Egypt, your thoughts can land you in prison 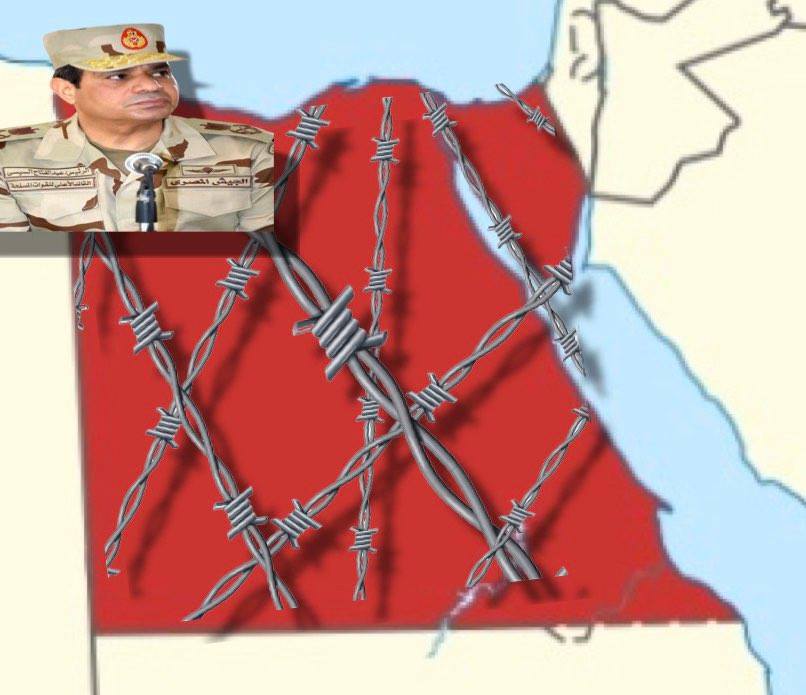 President Abdel Fattah al-Sisi’s violations against freedom of thought and expression continue, as it has not sufficed that he controls political life and has curbed the gains of the January 25 revolution that strengthened freedom of expression, public debate and political accountability. His regime has passed legislation that violates freedom of the media in an unprecedented manner. During the year 2019, it targeted all forms of free expression and the groups that interact most in public debate, such as journalists, social media users, university professors, and political activists. In its annual report for 2019, issued a few days ago, the Association for Freedom of Thought and Expression, a legal institution concerned with the promotion and protection of freedom of thought, expression and academic and students’ freedoms in Egypt, monitored dozens of violations by the al-Sisi regime so it could consolidate its control over the public domain and eliminate every voice that opposes it.

Freedom of the media is a thing of the past The year 2019 witnessed the continuation of the Egyptian government’s pursuit of anti-press and media freedom policies and practices. On the level of media ownership, last year witnessed the continuation of monopolistic policies in the press and media market, where the United Media Services Company, which owns the Egyptian Media Group and which is jointly owned by the General Intelligence Service, was able to complete a number of acquisition deals of media companies, production companies, and advertising agencies. The Egyptian Media Group is the main tool used by security agencies to tighten control of media ownership, which has resulted in the control of the ONTV, CBC and Al-Hayat networks. In addition to direct control of ownership, the Egyptian Media Group operates the Nile Radio Network, which is owned by the National Media Authority, and has signed a protocol with the National Media Authority to set a plan to develop state-owned television.

In terms of direct violations against the press group, the Association for the Freedom of Thought and Expression monitored not less than 48 incidents, in which 59 different violations have occurred during the year 2019. Among the most prominent violations reported was when security forces arrested journalists Muhammad Musbah Jibril and Abdel Rahman Awad Abdel Salam for conducting an interview with the former parliamentarian and head of the Reform and Development Party, Muhammad Anwar al-Sadat. The two journalists were imprisoned and the State Security Prosecution charged them with joining a terrorist group, using an account on the internet for terrorist purposes, and deliberately spreading false news to promote a terrorist purpose. Last September, police forces arrested CBC photojournalist Islam Mosaddaq from his home, then denied they had him. On October 1, the state security prosecution ordered the detention of Mosaddaq on case No. 488 of 2019, without informing any of his relatives or allowing a lawyer to be present. The prosecution charged him with participating in a terrorist group while knowing its objectives, spreading false news, and using an account on social media to spread rumours. Also, journalists working for Al-Mashhad newspaper were not allowed to cover the referendum on the constitution, which aimed at allowing President al-Sisi to remain in power until 2030, based on a decision made by the National Election Commission, who did not give a reason.

Various media outlets were also prevented from covering the vote counting processes from within the committees, where the spokesman of the National Media Authority announced that the various media outlets would not cover the counting processes within the sub-committees as was followed in all elections and referendums that were organised after January 2011. The authority stated during a press conference that the media does not have the right to broadcast the referendum numbers, and the only party entrusted with announcing the results of the referendum in accordance with the law is the National Elections Authority. Violations continued at the legal level as well, as the Supreme Media Council issued, on March 18 2019, a list of sanctions and measures that may be imposed on the press and media. In most of its articles, the sanctions list lacked the principle of proportionality between the violations committed and the penalties prescribed for them. Deterrent penalties were imposed for example, on actions that a journalist or media figure would normally practice during his daily work. The list also contained generic and obscure vocabulary and texts, and gave the president of the council exceptional powers to impose sanctions. 144 people imprisoned for expressing their opinion online During the year 2019, the Association for Freedom of Thought and Expression monitored 69 incidents, in which 144 people were punished with pre-trial detention, detention and investigation for expressing their views on social media, whether through writing or publishing videos, and sometimes because of their demonstrations in the streets or even for whistling from their home. Despite this, the prosecution charged them all with misusing social media and spreading false news. Among those most prominent incidents was the arrest of a citizen, Amir Muhammad Amin Issa, from in front of a school in the Qalyoub area in Qalyubia Governorate, while he was taking pictures of violations committed by the referendum committee on amending the constitution. On the same day, Ahmad Badawi Abd al-Majid was arrested in the Fifth Settlement for raising a banner calling on citizens to vote to reject constitutional amendments. The Supreme State Security Prosecution charged both Issa and Abd al-Majid with accusations of joining a terrorist group and using an account on social media to commit a crime that threatens the security and safety of society.

Egyptian authorities continued their practice of blocking websites, which began in May 2017, as the foundation monitored 40 websites that were blocked. They varied between sites for instant messaging applications, and journalistic, political and social sites, thus increasing the number of blocked websites in Egypt to 546. In one week in April, the authorities blocked seven domains of the batil campaign that was aimed at collecting signatures from citizens against constitutional amendments. Throughout that week, whenever the campaign launched a new domain, the authorities blocked it hours after its launch. Thirteen instant messaging apps were blocked in September, including popular application sites like Signal and Wire. This was in the few days prior to September 28 when contractor and actor Muhammad Ali called for demonstrations in the squares and streets of Egypt on this day, against President al-Sisi.

KSA and UAE attempts to include Egypt in their campaign to...