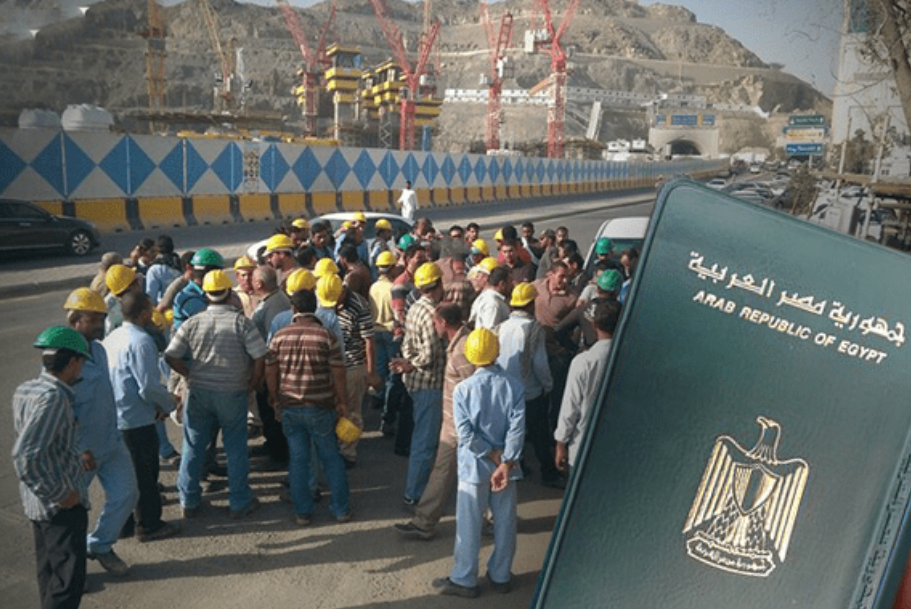 The decline in the demand for Egyptian labour and the delay in its ranking globally has raised growing popular concerns, especially as Egypt has for decades held a monopoly on exporting labour to Arab markets and workers were an important source of foreign currency. But that labour map changed after countries such as Iraq and Libya stopped importing workers due to political turmoil, as well as the decline of the Gulf’s economy. Member of the House of Representatives, Mona al-Shabrawi, addressed a parliamentary question to both the Prime Minister and the Minister of Manpower on the main reasons for the decline in demand for Egyptian workers abroad. The parliamentarian indicated that Egypt has fallen to sixth position after it was the fourth in the world to export labour abroad. Mona warned that “the decline in demand for Egyptian workers abroad has negative consequences for unemployment rates, and low remittances from Egyptians abroad of foreign currencies, which affects the Egyptian economy, especially as these transfers are one of the pillars of national income for Egypt.”

The Egyptian MP held the Ministry of Manpower responsible for “its role receding. After that Egypt was conducting intensive preparation and qualification courses for employment, this role was completely absent, and then the demand for Egyptian labour decreased.” According to the statistics of the Egyptian Ministry of Foreign Affairs until the end of 2017, the number of Egyptians abroad amounted to more than 10.3 million Egyptians, 68.4 per cent in Arab countries, 49.9 per cent of them in Saudi Arabia only, then Jordan at 17.8 per cent. The beginning of the decline in the demand for Egyptian workers abroad is due to the Saudi-Emirati war in Yemen that started in 2015, when Egyptian labour declined to 70 per cent, according to the head of the Division of Attaching Egyptian Workers Abroad in the Chamber of Commerce, Hamdi Imam. Imam clarified in press statements that Egypt had fallen to sixth position in the export of labour after it was ranked fourth globally, and reached less than 5 million workers, and attributed this to Egypt’s loss of large markets for Egyptian workers abroad. Despite the decrease in demand for Egyptian labour, official government figures indicate an increase in the percentage of remittances from Egyptians abroad. During the first five months of the current fiscal year, they reached $11.1 billion, compared to $9.9 billion in the same period of last fiscal year. This means an increase in remittances of $1.2 billion dollars, or 12.1 per cent, according to the Central Bank. This contradiction between the decline in employment abroad and the increase in remittances was a result of the high costs of accommodation for expatriates in countries such as Saudi Arabia, as a large number of them returned to their families in Egypt to reduce expenses. Therefore, what they were spending there was sent to Egypt, so the conversions increased, explained Abdul Rahim al-Morsi, Vice President of the Egyptian Work Abroad Division. Al-Morsi stated that most of the workers that were laid off during the past few years are surplus, temporary and unimportant labour in the markets abroad, according to Al Jazeera. He pointed out that active workers have retained their positions, and what is required is labour with special specifications, whose wages rise more than regular labour whose demand has decreased. He stressed that the drop in the price of oil affected development projects in the Gulf countries, and thus the demand for labour declined, in addition to the quality of the demand becoming focused on technicians, not craftsmen. He stressed that the decline began in 2016 and by 60 per cent to 70 per cent, which is a large number that should be a warning to parliament.

On the other hand, the labour activist, Sayyid Hammad, attributed the decline in demand for Egyptian labour to the “difficult conditions that countries like Libya and Iraq are going through, as it was a large market for Egyptian labour, but it turned into a repellent market, so it increased the crisis of declining demand for Egyptian labour.” Hammad pointed out that among the reasons also is the retreat of trained workers, “at a time when the markets are looking for unusual workers, the conditions of workers in Egypt are not the best, the government does not meet the criteria of development, training, or qualification.” He listed the reasons for the decline, such as the Gulf States’ resorting to the cheaper Asian markets, and the blockade on Qatar, which was considered an important market for Egyptian labour.

Cairo is swimming against the current in Libya