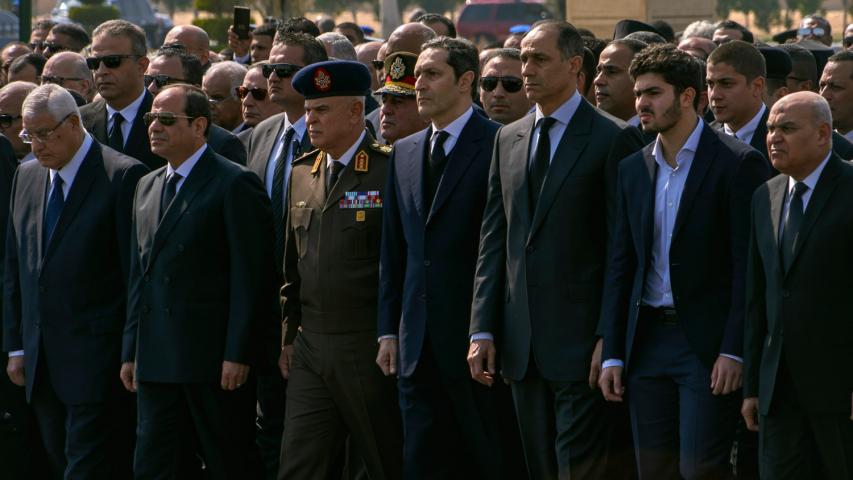 The Egyptian regime held a prestigious military funeral attended by the president and senior officials who followed the funeral of the ousted president to his place of burial, two days after his death aged 91. The regime dealt with Mubarak as a symbol of the Egyptian state, instead of a dictator who killed thousands of his people through corruption, neglect, and torture, besides being convicted with a final court judgment of stealing public money and being ousted as president by the January 25 revolution. This appeared to be a message from the current regime to the Egyptians that military men are immune to punishment alive and dead. The message was that the revolution was meaningless to al-Sisi’s military regime.

Mubarak is convicted of theft in a final judgment
In January 2016, The Court of Cassation, the highest judicial power in Egypt, issued a historical ruling convicting the ousted president and his two sons, Gamal and Alaa, of stealing EGP 125 million from presidential palaces and forging official documents in what became known as “the presidential palaces case.” The court administered a three-year prison sentence, ordered he pay back the stolen money, and pay a fine of EGP 21 million. Investigations have revealed that Mubarak and his two sons spent EGP 125 million on properties and falsified official documents so they appeared as maintenance costs of the presidential communication centres. The president’s secretary granted ther personal wishes of Mubarak, his wife and his two sons and adapted the state’s finances so they would look like maintenance costs. This falsification was carried out in cooperation with the Arab Contractor company headed by Ebrahem Mehleb, who was assigned as the first prime minister under al-Sisi after general Mohamed Farid el-Tohamy resigned. El-Tohamy was the president of the Administrative Control Authority under Mubarak who was dismissed by the late President Mohamed Morsi on charges of corruption, but al-Sisi assigned him as chief of general intelligence after the military coup in July 2013.

The case files revealed that Egyptians spent, without knowing, millions of pounds on furniture and bills for the two offices used by Alaa and Gamal to run their profitable investments in Heliopolis. Haidy Rasekh, Alaa’s wife, made the state pay for the restoration of their new villa in the elegant Golf area inside Katameya Heights in New Cairo. When Gamal and his wife Khadijah gave birth to their first daughter in 2010, the Arab Contractors Company paid the expenditures of construction and furnishing a new separate suite for the newborn Farida in el-Orouba palace in Heliopolis. When Suzanne Mubarak decided to have a private office in the new Intercontinental City stars Cairo, the Egyptians paid the cost for it to be decorated, and for its furniture. After the tragic death of Mubarak’s grandson aged 12 in 2009, the Arab Contractors Company used the budget of the presidential communication centres to build a huge tomb in Nasr City. The investigations revealed in detail the amount that was spent on the five villas owned by Mubarak and his two sons inside one of the Sharm el-Sheikh resorts over an areas of 25 acres, owned by Gamal and Alaa.

An offence against honour, but al-Sisi doesn’t care
The crimes that Mubarak and his two sons were convicted of in the “presidential palaces” case are an offence against honour, that should prevent them from applying to any official position for a lifetime and prevented Mubarak, by law, from having a military funeral. The 25th article of the Egyptian Criminal Law provides that every judgment of a criminal penalty is accompanied with the deprivation of being accepted in any governmental service directly or as a contractor no matter his importance, rank or medal, which means Mubarak’s military ranks and medals for which he received hundreds of thousands of pounds, should be withdrawn and he should be deprived of a military funeral. Al-Sisi ignored this law and declared three days of mourning and held a prestigious military funeral for Mubarak. Twenty-one shells were fired in memory of the ousted president. Al-Sisi wanted to send a message that military men cannot be punished whatever crimes they committed, even if revolutions broke out against them. Besides this it was symbolic of the repudiating of the Egyptian state of the January revolution. Al-Sisi’s vision is very clear, especially if you compare how the Egyptian regime dealt with the death of the late President Mohamed Morsi. Morsi was buried in the dead of night in the presence of a few of his relatives. There was no normal funeral, consolation ceremony or family tomb, completely the opposite of Mubarak.