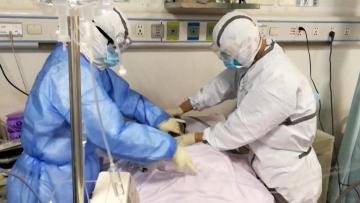 The Ministry of Health announced that the number of cases of coronavirus inside the country had risen to eighty, after registering thirteen new infections, including six cases without any symptoms, and one case that had died. Ministry spokesman Khaled Mujahid said that the new cases include ten Egyptians and three foreigners, noting the death of a case of a sixty-year-old Egyptian woman from Dakahlia governorate, who was suffering from acute pneumonia, and was diagnosed with coronavirus, so she was transferred to the Isolation Hospital in Ismailia, but she died on Thursday. Sources reported that the deceased woman and her family had contacted with an Italian woman who came to their village last week to bury her Egyptian husband, and this Italian woman was infected with the virus.

The Ministries of Health and Education issued a decision to close City International School in the suburb of Zamalek and impose self-isolation in homes on all students, teachers and administrators for a period of 14 days, after a student was infected with the virus by his father who had contact with an infected foreigner. While the General Authority for Educational Hospitals of the Ministry of Health announced that a nurse at a hospital infected with fevers infected with Corona virus, after contact with a positive case of the virus was being held inside the hospital. This announcement comes after a group of nurses in the hospital organized a protest last night to denounce the position of the hospital administration, which refused to announce the announcement of their colleague being infected with the Corona virus.