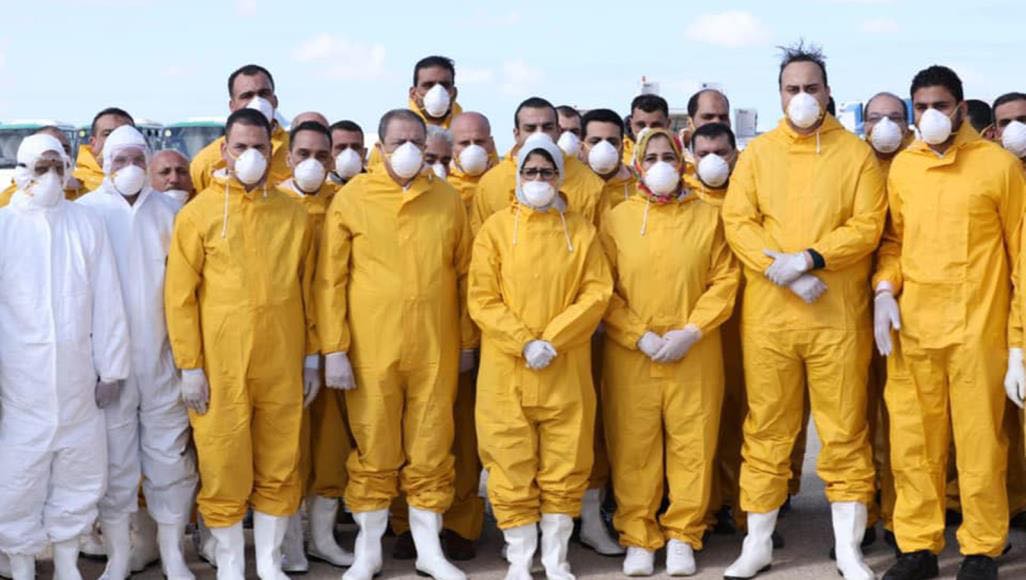 Once a group of Canadian researchers announced their estimates of the true numbers of people infected with the novel coronavirus (COVID-19), the Egyptian regime began to deny those estimates. The Egyptian regime says that the number of people infected has reached 366, including 19 deaths, and 68 recoveries. But a team of researchers in infectious diseases at the Canadian University of Toronto said that the estimates of the number of people infected with coronavirus in Egypt ranged between 6,000 and 45,000. Infectious disease specialists from the University of Toronto, who studied the discrepancy between official and likely infection rates in places such as Iran, gave a grim picture of the possible spread of the virus in Egypt. Using a combination of flight data, traveller data and injury rates they said the size of the catastrophe in Egypt was estimated at 19,310.

The Egyptian regime strongly attacked the British newspaper the Guardian and said that it closed its office and withdrew its license in Cairo because it published these estimates. The Egyptian Information Authority also sent a warning to a New York Times reporter, because he published the same estimates on Twitter. General Abdel Fattah al-Sisi said that his regime has no interest in hiding the true numbers of people infected with coronavirus, and that it is dealing with the crisis transparently. The Egyptian media loyal to General al-Sisi’s regime strongly attacked those estimates, and asked how the Egyptian regime could conceal such high numbers. Egyptian journalists have argued that these numbers can no longer be hidden. Al-Sisi’s opponents responded that the Egyptian regime has more than one reason to conceal the large numbers of infected. Opponents pointed out that the Egyptian regime tried to hide and deny the coronavirus infections until the last moments, in the hope that the flow of tourists to Egypt would continue. The Egyptian regime also knows that the country’s health system is unable to receive and treat large numbers and therefore has chosen to pursue a policy of denial.

ِAs for how the regime hid the real numbers of the injured, this was done by the following:
First: The Egyptian media used hidden gestures that made large sectors of uneducated people see the virus as a disgrace that should be denied and not disclosed and treated. For example, an Egyptian doctor admitted on Facebook that she went to an elderly person after his death to examine him after it was rumoured he died as a result of coronavirus. After the doctor examined him, she discovered he had died as a result of an overdose of drugs, and that he had no evidence of being infected with coronavirus. In the Monufia Governorate in the north of the country, witnesses confirmed that one of the infected people in their village managed to escape from the security forces that came with the doctors to take him to a hospital designated for medical isolation, after his coronavirus test was positive. The relatives of the patient thought he should escape and they viewed medical isolation as a prison and a disgrace, and they continued to deny that he was sick with coronavirus. Second: The Egyptian media have not clearly explained the symptoms of coronavirus, and many people still considered symptoms they experienced as a cold, or seasonal flu. Third: The spread of coronavirus coincided with a period of weather fluctuations in the country, which caused colds, coughs and a high temperature for many, which made many Egyptians think that the symptoms of coronavirus are the same as colds. Fourth: The large numbers of infected people are really few compared to the large number of the Egyptian population, as the number of Egyptians exceed 100 million, and therefore these numbers (19,000) can simply disappear amid the huge population. Fifth: The Ministry of Health’s announcements did not mention any details and there was no way to know the numbers of the injured in detail in each governorate, for example. In his latest speech, General al-Sisi warned that the numbers of people infected with the new coronavirus may record leaps of several thousand. The Egyptian Minister of Health, Hala Zayed, also said that if the Egyptian regime fails to defeat corona then the reason is the people’s behavior, because they did not take the necessary precautions and did not adhere to the measures demanded by the Ministry of Health. Observers saw this as a prelude to acknowledging how widely spread coronavirus is in the country.

Monopolising information is how Sisi’s regime deprives the people of the...