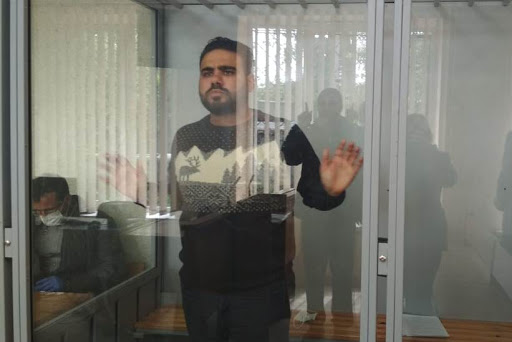 The Egyptian media, loyal to the regime of General Abdel Fattah al-Sisi, celebrated the news of the arrest of the 27-year-old Egyptian student, Moataz Mohamed, and said that he was a “dangerous terrorist leader”, and a member in the opposition Muslim Brotherhood in Egypt. The Egyptian media has promoted the arrest of Moataz, who has been studying medicine in Ukraine for nearly 6 years, as a major achievement of the system that is pursuing his opponents abroad and seeking to arrest them everywhere.

The timing of Moataz arrest came as a surprise and surrounded by many questions and contradictions, which reinforced the possibility that he was a “scapegoat”, as Egypt wants to save its dignity in front of Ukraine. Few hours before Moataz was arrested, the Ukrainian Deputy Foreign Minister met with the Ambassador of Egypt, and discussed the issue of the return of the Ukrainian prisoner, Edward Chikosh, who had been sentenced to life (25 years) in Egypt in March 2012.

Opponents say the matter appears to be a deal, whereby Ukraine saves one of its citizens from the notorious Egyptian prisons, but in return it hands over a human being to a brutal regime. An Egyptian court has accused Chikosh of charges related to arms smuggling and the organization of mass riots.

The arrest argument mentioned by Ukraine in Arabic news website, quoting the Egyptian State Security Agency, is that Moataz is on the INTERPOL wanted list, and he belongs to the Muslim Brotherhood. This information is inconsistent with the fact that on September 11, 2019, Moataz obtained permanent residence in Ukraine, that is, after making sure that he was “not convicted, and not required by the international police (INTERPOL).”

In addition, Ukraine does not classify the Muslim Brotherhood as a terrorist organization, just like almost all European countries. Friends of Moataz say that he was arrested after the military coup in January 2014, and then the judiciary proved his innocence on charges of possession of weapons and killed a child in September of the same year. During this period, Moataz was subjected to “severe torture”, and his rights were grossly violated.

Moataz was studying at that time at the University of Egypt for Science and Technology (especially) in the city of October 6, west of Cairo. After his release, Moataz traveled legally to Ukraine, obtained permanent residence there, and settled there. Later, his case was referred again to the military court, and he was sentenced in absentia in 2016 to life imprisonment.

A friend of Moataz says he was known for his opposition to the Egyptian regime, and that supporters of the Egyptian regime have reported that to the regime, which made him a target of the Egyptian regime. A friend of Moataz confirms that the supporters of General Abdel Fattah al-Sisi threaten opponents in Ukraine by reporting about them, listing them in Egypt on the terrorist lists, and informing INTERPOL to arrest and send them to Egypt, to be imprisoned. Moataz’s sudden arrest prompted human rights defenders to defend his case, given that the arrest operation contradicted Ukrainian laws and humanitarian standards.

Moataz Ukrainian wife Anastasia says that the Egyptian regime “accuse him of terrorism and murder, but the Egyptian embassy did not inform him of any decision issued against him over the past years, and the papers presented in the name of INTERPOL contain many errors.” His wife indicated that the papers presented so far are signed as “unofficial translation”, everything indicates that the accusation is fabricated.

Ukrainian human rights activists said that they started writing to the relevant authorities and officials on behalf of several human rights organizations, focusing on the fact that the arrest of the Egyptian youth is not different from Russia’s arbitrary arrest of Ukrainians, and that according to the human rights situation in Egypt, the highly likely to be the fate of Moataz torture and death.”

Observers say that Moataz’s arrest and deportation to Egypt (if it happens) carry very negative signs, and sends a message that Ukraine, and possibly other countries in future, are complicit in violations of the Egyptian regime. The Egyptian regime views Moataz’s deportation as an implicit recognition of his legitimacy, and the correctness of his trials for opponents in Egypt, which human rights organizations say lack minimum standards of justice.

Violence mounts in Cairo: A gun battle in the Egyptian capital...