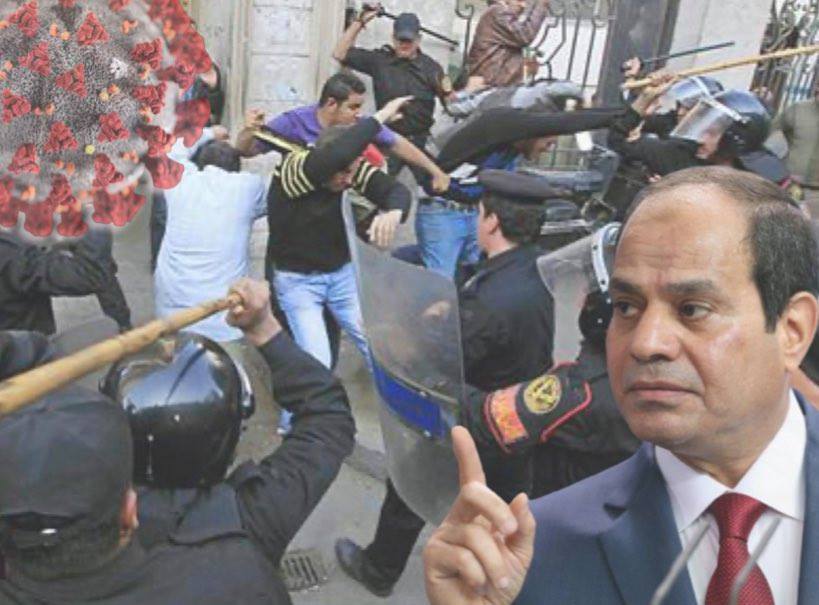 While the coronavirus has raised fear across the world due to its impact on health, and sometimes its economic repercussions, COVID-19 has raised in Egypt fear of another kind… arrest.

The Egyptian security authorities have launched a campaign of arrests over the past two months, targeting journalists, translators, and a number of bloggers who have criticised the Egyptian regime’s handling of the coronavirus crisis (COVID-19).

Over the past years, the bogeyman terrorism has been the primary pretext for detaining opponents, and the Egyptian regime has designated the Muslim Brotherhood, one of the largest opposition parties in the country, as a terrorist group, and accused all opponents of belonging to it.

Although human rights groups say that the Egyptian regime has transformed the country into an open prison over the past years, the regime has invented the horror of corona to expand repression and cement the “Republic of Fear.”

“While some governments around the world pardon their prisoners during the epidemic, Egypt insists on keeping its prisons full of journalists instead of letting them cover the pandemic and other current events,” said Sheriff Mansour, CPJ coordinator for the Middle East and North Africa. This comes after al-Sisi endorsed, on May 8, controversial new amendments to the Emergency Law of 1958. These amendments were presented as strategies to combat the coronavirus pandemic.

Ostensibly, some of these modifications seem somewhat reasonable, including quarantine for people coming from abroad and more restrictions on public and private gatherings. Nevertheless, these new amendments enable the Egyptian army to misuse it, as they also prevent gatherings and prohibit protests.

Last April, Human Rights Watch said, in a statement, that only five of the 18 amendments proposed were directly related to public health developments. “The inclusion of these amendments and making them part of the emergency law means allowing the authorities to implement these measures whenever the state of emergency is declared, regardless of whether there is a public health emergency or not,” HRW said. The organisation warned that these changes would lead to repression in future emergencies.

Egyptian human rights lawyer, Tariq Hussein, commented on this, saying that while the world is reducing prisoners under the corona pandemic, the Egyptian authorities are doing the opposite. US-based Egyptian journalist Omar Khalifa wrote on his Twitter page that the Egyptian authorities continue to use corona as cover to prevent all forms of freedom of expression. Shaimaa worked as a journalist and published many articles.

Gamal Eid, executive director of the Arabic Network for Human Rights Information (non-governmental), said Shaimaa worked with them as a researcher until three months ago. “An evil mind retaliates against every critical voice and tries to spread fear among young people, especially journalists. Shaimaa is the 11th journalist who has been held from March until now. Journalism is not a crime,” Eid wrote on his Twitter page.

The Arabic Network for Human Rights Information determined the imprisonment of 10 other (in addition to Shaimaa) journalists since March 18, that is, the time of the start of the corona pandemic in Egypt, until May 18. Eid added: “2 of them were in detention then re-imprisoned, meaning release during this period and their imprisonment on new cases, and 8 new journalists arrested and detained. Only the chief editor of Mada Masr, Lina Atallah, has been released.”